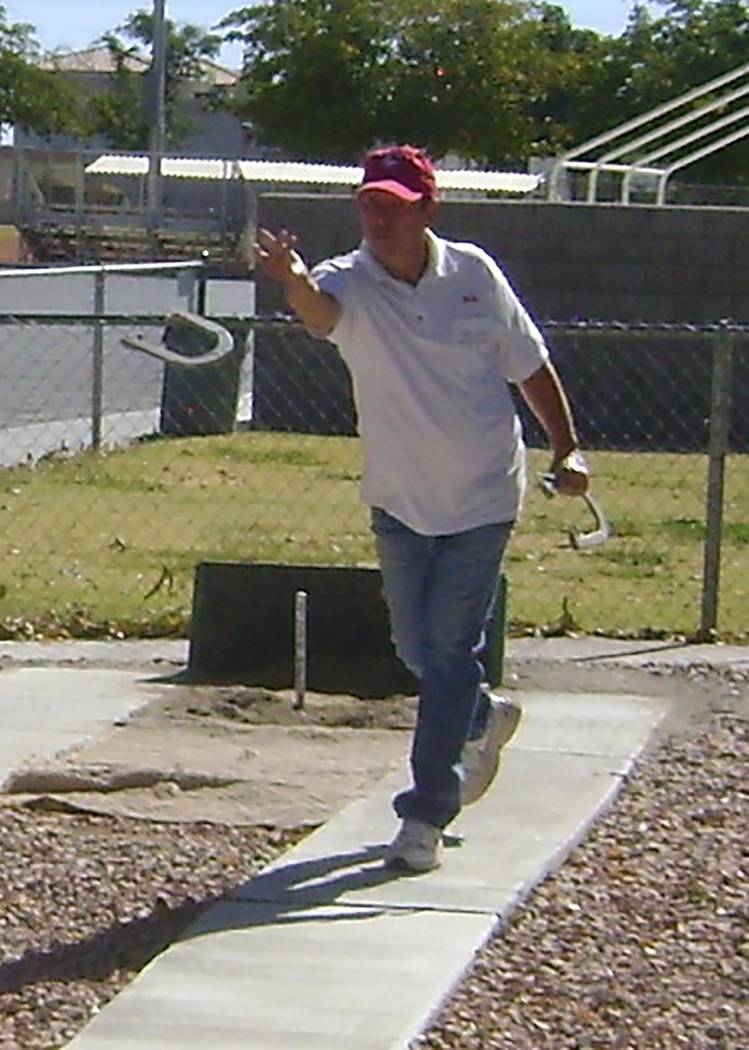 Mike Norton/Special to the Pahrump Valley Times Bob Swain of Bullhead City, Arizona, won the tournament championship at the Pahrump Boo on Oct. 26 at Petrack Park. Swain went 5-0 and hit ringers on 62 percent of his pitches. 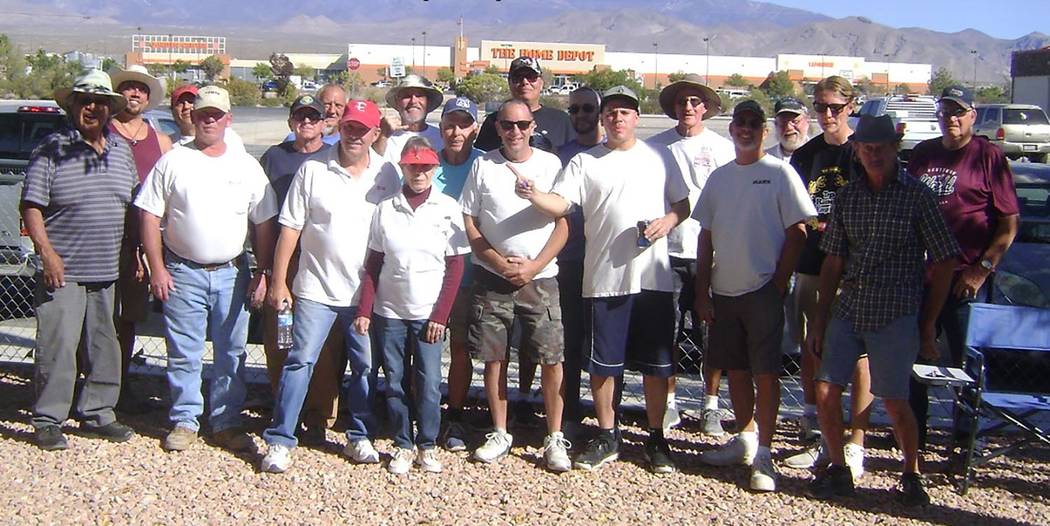 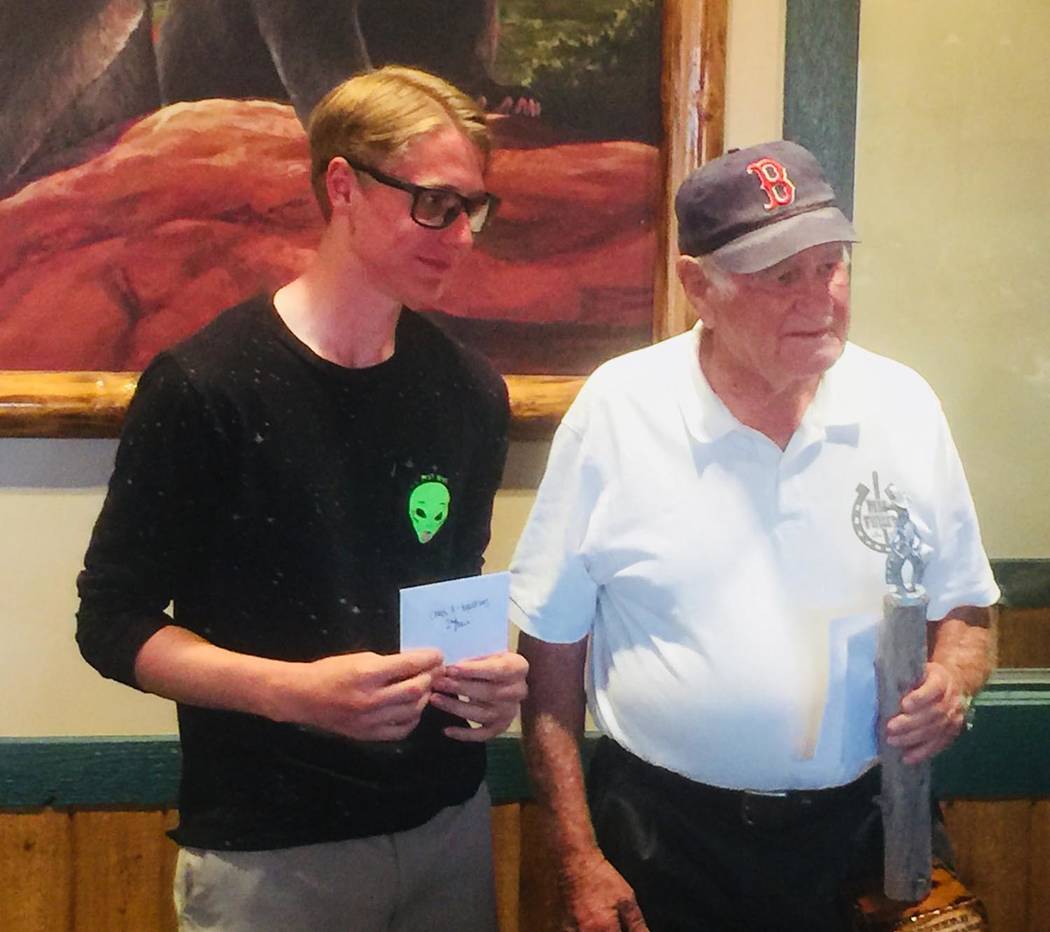 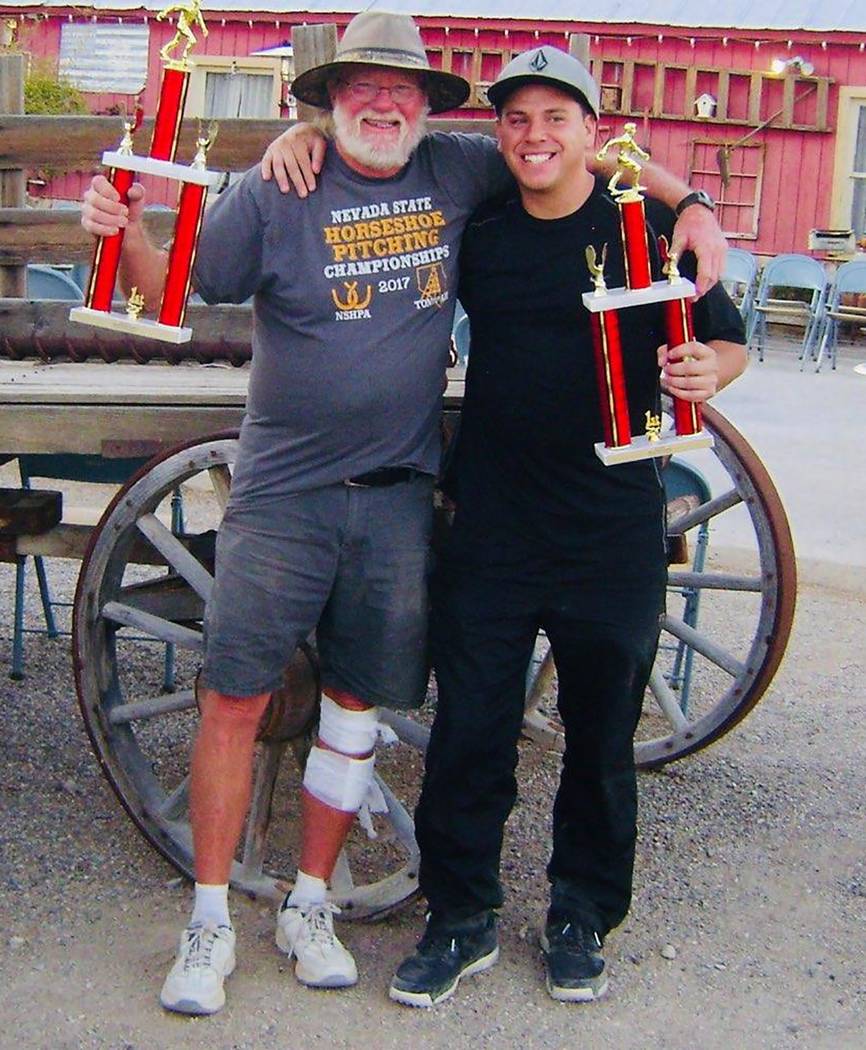 Mike Norton/Special to the Pahrump Valley Times Don Brown, left, and Willy Zuloaga show off their trophies after winning the horseshoes tournament during Old West Days on Nov. 3 in Shoshone, California.

A season-high turnout filled three divisions at the Pahrump Boo horseshoes tournament on Oct. 26 at Petrack Park, and a pitcher from Arizona ended up taking top honors.

Bob Swain of Bullhead City, Arizona, who came into the tournament with a ringer percentage of 54.00, topped that, hitting ringers on 62 percent of his pitches and finishing with 269 points to cruise to a 5-0 record in Class A to win the tournament championship.

“It was a great turnout with 18 players from all over the state, and three pitchers were from Arizona,” said Mike Norton, the secretary-treasurer of the Nevada State Horseshoe Pitching Association.

The highlight for Swain was an 80-percent game, tossing ringers on 32 of 40 pitches during an 81-22 win over Mark Kaczmarek. Swain finished with 124 ringers, more than 40 ahead of anyone else in Class A, and his closest game was a 10-point win over second-place Ty Frazier (3-2) of Kingman, Arizona, who beat out Ken Jose (3-2) of Tonopah on the ringers tiebreaker, 83-54.

Don Brown of Pahrump, the previous president of the state association, beat out current president Lathan Dilger to win in Class B. Brown went 4-1 despite tossing few ringers than the next three finishers in the division and being the only one of the top three not to exceed his entry ringer percentage.

But Brown won one game by a single point, another by 2 points and a third by 3 to overcome a 37-7 drubbing at the hands of Dilger, who tied with Joseph Kalache of Las Vegas at 3-2. Dilger’s 64 ringers to Kalache’s 59 gave him second place.

Newcomer James Hatch went 4-1 to take the Class C title, edging Rai Adams of Boulder City, whose tie with Willy Zuloaga left him 3.5-1.5. Hatch and Adams each pitched 30 ringers and Hatch had just a 2-point edge overall, but when they met head-to-head Hatch easily won 24-6, one of three easy wins during the round-robin for him.

“Seven had never played here in Pahrump before, and out of those seven, five are new players,” said Dilger, who was pleased the tournament drew pitchers from outside Pahrump and especially pleased to see younger pitchers, including his son, Kasey, a senior at Pahrump Valley High School, who went 2-3 to finish fourth in Class B, Dilger said.

A week later, Pahrump’s Dennis Andersen won Class C at the Western Open in St. George, Utah. Kasey Dilger finished second in Class E, losing in a playoff to Mac Fuller of St. George for the top spot but still pocketing $165 for his efforts.

The tournament drew 69 pitchers across seven classes, including nine pitchers who made the trip from Pahrump to participate.

Then on Sunday, Old West Days in Shoshone, California, featured a horseshoes tournament, with 16 two-player teams participating. Don Brown of Pahrump teamed with Zuloaga to win the tournament and share $180. Kasey Dilger and Larry Fellows defeated Lathan Dilger and Randy Salzwimmer in a playoff to take second place and split $100.

“I’d like to thank all my sponsors,” said Lathan Dilger, who continues to expand horseshoes competitions in the area. “Analia at Shoshone Village Corp., Susan at Shoshone Propane, Ken at Tire Works, Bob at Tarantino’s Pizza and Judy at Lighthouse Gifts.”

Sponsors contributed trophies and raffle prizes for the tournament, which was a blind draw round-robin format. “Mike Norton was the tournament director, and he did an outstanding job,” Lathan Dilger said.

The Pahrump Boo was the final sanctioned tournament of the 2019 season. The tournaments at St. George and Shoshone were not sanctioned, meaning they were open to anyone, not just members of the Nevada State Horseshoe Pitchers Association.