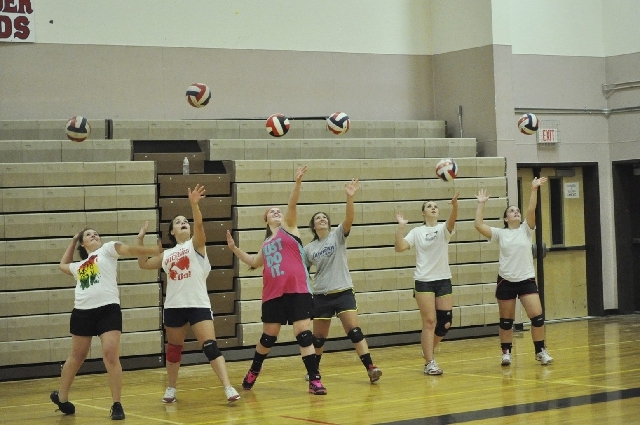 Nye County regional volleyball teams are ready to go. The season gets started this week with three Nye teams going into tournament action.

Tonopah will be headed to the Ely tournament and Pahrump will be going to the Las Vegas Invitational. Round Mountain will be at Carlin. Beatty is idle this week and will be in Pahrump the following week for the annual Pahrump Invitational.

Trojans Coach Jill Harris is excited about her team as she announced her tentative starting lineup. Payton Hart will be an outside hitter, Bryana Soliwoda is a setter, Mikala Davis is middle blocker, Shayla Dance is a middle blocker, Sami Altiero is a defensive specialist, Lauren Ashford will be the libero. Two other players most likely to play for the varsity squad are Jill Smith and Andi Bishop.

Harris was excited about the upcoming tourney.

“I have more experience and I have a taller team this year. It will be a more aggressive team. I still have some newbies and it is coming together. They are all playing hard,” she said.

She said Hart is one of the hardest hitters her team has.

“Payton Hart is swinging big. She can hurt you. She is stepping up fine with these girls and leading,” Harris said.

The Muckers’ new coach, Harvey Gonzalez, is excited to begin the year.

“The girls are excited to start the season. The team has a lot to do still. They are defending state champions, so they have a target on them and I let them know that. Other schools will be gunning for them. I think they have the maturity and the experience. These girls are fun to be around and they want it bad,” he said.

THS has 19 girls total coming out for volleyball and of those, only nine made the varsity squad. The team will have six seniors with experience playing and three juniors.

Sydney Maughan will be a setter, Madison North will be the libero, Julia Klapper will be a hitter, the other setter will be Shay Robertson, and Ashley Gray will be in the middle with Kylie Merlino.

Gonzalez had some praise for his tall middle hitter and blocker. “Ashley Gray destroys that ball. She is very strong.”

When asked if he had any concerns about the lack of a bench he chuckled and said, “We will have to see how the other girls come in off the bench and intertwine. We have one sophomore I am going to try to use because she is obviously pretty good. I would rather give her more playing time in JV. She is 5 feet 10 inches, if not a little taller. Her name is Sandra Dunn.”

Tonopah, along with all the Nye County teams will gather with 16 other teams from Vegas for the Pahrump Valley Invitational on Sept. 7.