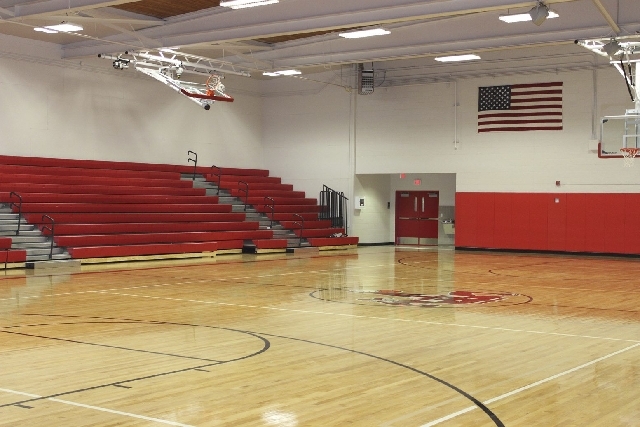 “The old gym was completely worn out. The kids could not even use the gym for practice anymore. We had mold problems. The smell was bad,” Eason said.

The time had come to remodel the 1954 building, which had seen some great days since it was built. The town opted not to destroy the old and bring in the new. Tonopah is a very historical town and proud of its heritage. Many of the people who reside there are Tonopah natives and have graduated from the high school.

Eason believes the district was sensitive to the town.

“A lot of the old town people wanted to keep the old gym. The floor was from the original gym from the other school. The school district asked a bunch of us for input just like they do with any project,” Eason said. “One of the big issues was no concession stand. They addressed it. The locker room in the back, they weren’t going to keep it. My big thing was I had $100 helmets for football. I needed some place to lock them up. The district made all the stuff happen — everything we wanted.”

Wonderly said they started the first phase and then sat down with the people to listen to concerns.

“There were some concerns early on so we stopped the project to have a meeting and get the community involved to find out exactly what their needs were. We incorporated those needs into the second phase. I think it turned out well and everyone was real pleased with the quality of the project,” he said.

Wonderly said, “I think more than anything there was a lot of sentimental ties to that gym because Tonopah is a close-knit community. They did not want to see it torn down and they wanted to maintain it. We evaluated it and decided to work with what they had there as long as the building was structurally sound,” Wonderly said.

Eason said there is something to be learned from this project.

“The reason people thought there was so much drama was because no one would go to the meetings. People need to sit in meetings to find out what is going on. The district sat and listened to us. We are pretty resilient people and we really don’t scream too loud.

“If you can sit down like civilized people and talk, then you will accomplish things. The community is satisfied. We are happy with it. My grandmother showed up at 90 years old. Walking through at the open house she said, ‘This is so much nicer.’

“They did a good thing keeping the historical part of it. That’s where the tie is. It was a big project and they handled it very professionally.”

The end result was a $2.2 million project being completed on time and under budget.

The money for the gym project came from the same bond which provided funds for Manse and Floyd elementary schools and Pahrump Valley High School. The gym was totally remodeled and received new locker rooms and a new concession stand.

Last Wednesday the school district had an open house for the new gym, where they fed nearly 100 people.