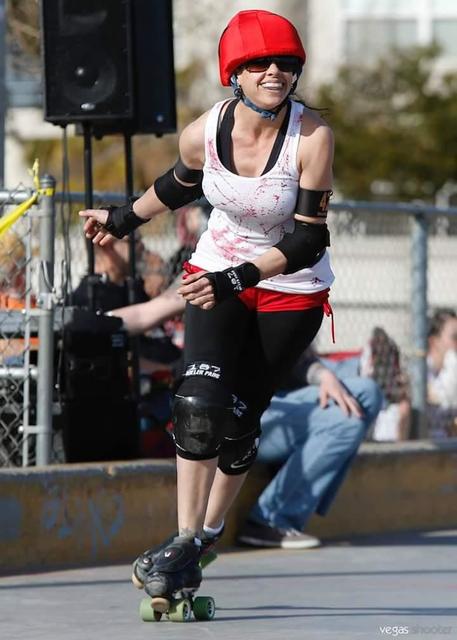 Jessica Henry wearing her protective gear, skates for the Fabulous Sin City Roller Girls in Las Vegas. Like McCoy, she was drawn to the physicality of the sport. Special to the Pahrump Valley Times 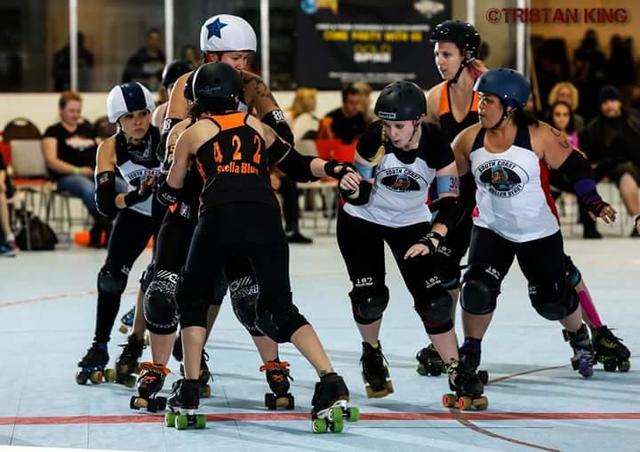 The Fabulous Sin City Roller Girls are seen getting it on in a match. The girls can be seen at West Flamingo Park at 6255 W. Flamingo Road in Las Vegas. Special to the Pahrump Valley Times 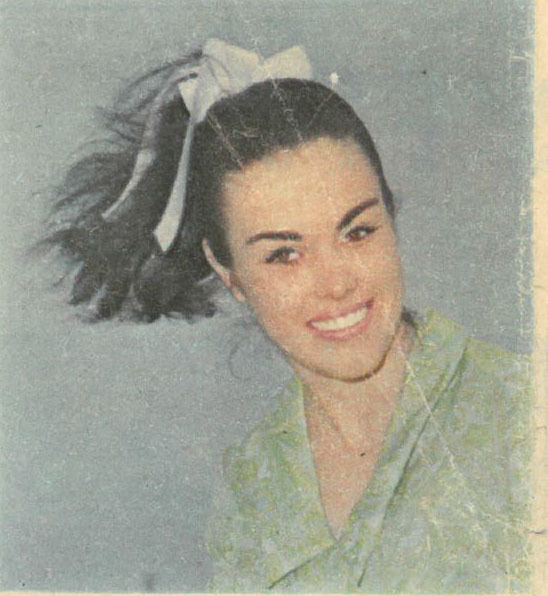 A former rookie of the year roller derby queen in 1966, McCoy (now Cindy O’Neill), who now resides in Pahrump, was a skater in roller derby during its heyday. She says the sport is back but not the same. She wore no helmet, just her hair ribbon, which was her trademark. Special to the Pahrump Valley Times 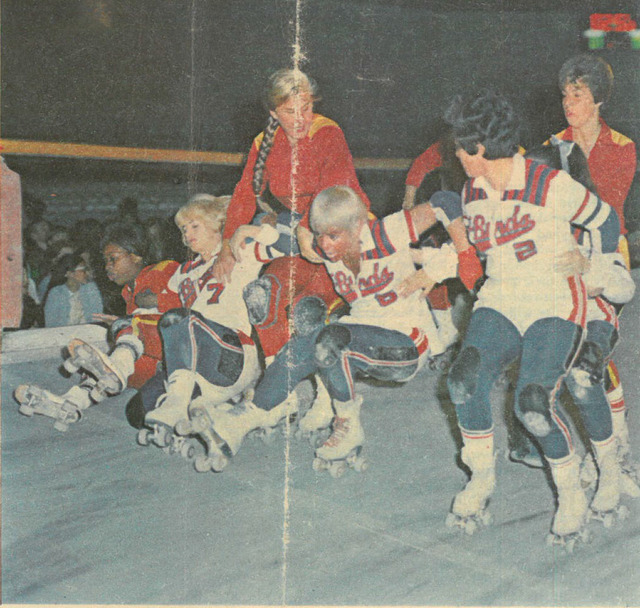 Special to the Pahrump Valley Times Modern roller derby tracks are flat tracks. The track seen here is from the 1960's and is banked. The skaters back then could reach speeds up to 55 miles per hour. Cindy McCoy can barely be seen, all that can be seen of her is her blue hair ribbon. Also notice that the skaters wore few pads. 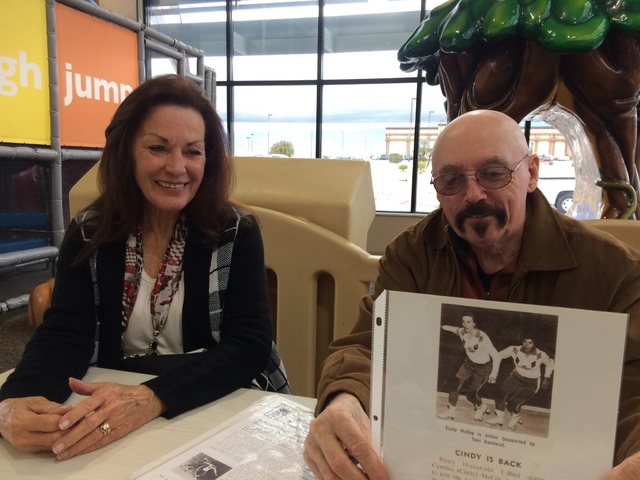 Now in her 60s, Cindy McCoy with her husband Terry O’Neill, are promoting her story through a book about her life and a movie. She feels that people can relate to her story. Vern Hee / Pahrump Valley Times 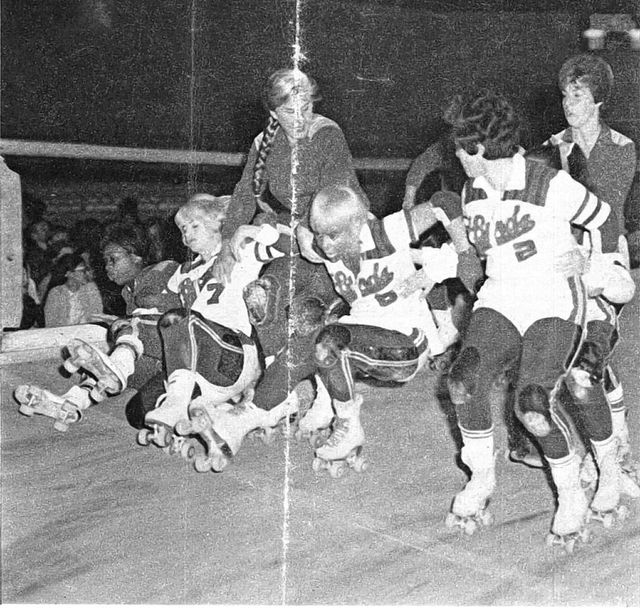 Roller Derby through the eyes of two athletes

Roller Derby has been back as a sport since 2001 and it has slowly evolved over the years. Some say is a mere shadow of the sport it once was in its heyday.

The changes are seen through the eyes of two athletes from two different eras, Cindy McCoy, a jammer from the 1966 Australian Thunderbirds, and Jessica Henry, a modern-day skater from the Fabulous Sin City Rollergirls in Las Vegas.

A former rookie of the year roller derby queen in 1966, McCoy (now Cindy O’Neill), who now resides in Pahrump, was a skater in the roller derby during its heyday. She says the sport is coming back, but it’s not the same.

“I was a jammer and scored for my team,” she said. “We did things that you couldn’t get away with today. For one thing, we didn’t wear helmets. Just look at what they make the football players wear now. We hardly had any pads.”

Henry, a fan of Cindy McCoy, in comparison looks almost like a football player on skates and wears a helmet, elbow pads and knee pads.

She compared her story to McCoy’s story.

“I was flabbergasted when I read her story,” she said. “We have similar stories. We are roughly the same height and weight when we started. I was a jammer and so was she.”

According to Terry O’Neill, McCoy’s husband of 17 years, roller derby was on 122 TV stations back then and a roller games program from that time said there were five million fans in 50 American cities. Arenas with as many as 11,000 screaming fans came out to see the blood and guts—and there was plenty of it.

Today it may not be filling arenas.

“It is seen on ESPN twice a year,” Henry said, “We had as many as 700 fans coming out when we had a home at the Riviera Hotel, but since they demolished the hotel we are without a permanent home.”

Henry skates for a Las Vegas team, the Fabulous Sin City Rollergirls, which has been around for 12 years and is a member of the Women’s Flat Track Derby Association, which has 392 teams throughout the country.

“There were a lot ofconcussions and broken bones,” McCoy said.

McCoy didn’t escape injury her first year and it was a serious one. It was so serious that they thought she would never skate again.

“I had skated in a match and hit my tailbone hard that night on the rail and then went home,” McCoy said. “The next day I went to teach at the training school. We were training young Australian skaters to take our place. And well I got impatient because they were not falling like they were trained to do so and I just wanted to show them right and I came down hard on purpose.”

McCoy came down so hard she dislocated her tailbone, was in the hospital for weeks and had to fly home.

“I was in tears that night and the manager finally sent me to the hospital,” she said.

Although she has done this for years, Henry has never been seriously hurt, no broken bones. She attributes the lack of injury to the fact the game has changed.

Today the games are held on a flat track, whereas during McCoy’s time the rinks were banked.

“The games are much slower,” Henry said.

Although Henry skates mostly on flat tracks she said she did get to skate on a banked track.

“I have skated on a banked rink and you do get the high speeds and it’s more dangerous because of those speeds. It was a thrill to do it and it was scary,” she said. “Maybe that is a factor in why we don’t have the crowds they had back then. Also, those banked tracks cost a lot to build. Today, the derby is slower and it’s like playing speed chess with someone throwing bricks at you.”

O’Neill said the game was faster back in the 60’s and the men and women reached higher speeds.

These speeds led to some great collisions on the track and good entertainment and that’s what McCoy was drawn to at a young age.

She got started at the early age of 14. She was a product of a bad divorce and had moved with her mother to Los Angeles from Colorado and had a hard time adjusting. One day she saw a roller derby match and saw an ad in the program that the roller games were looking for skaters. She then pleaded with her mom to let her do it. To become a skater full time, McCoy gave up a possible lucrative career in modeling.

“I loved to skate,” McCoy said. “I started going to the rink with my mother. They took me to see a roller game and I loved it because it was men and women. I got permission for my mother to go to the training school and after a year I was picked up by the international team.”

So at 5 feet six inches tall and 116 pounds, McCoy became a member of the Australian Thunderbirds.

She said she was one of the youngest skaters at age 15.

“Most of the skaters I skated with were between the ages of 18 to 30,” she said.

She became a jammer because of her small size and great speed. Her speed made her deadly on the track and as a jammer it was her job to pass the other team. Points are given whenever a jammer from the opposing team passes the opposition, one point for each team member passed.

The team picked up all her travel expenses and she went off to Australia to compete.

Roller derby was a big part of McCoy’s life and the sport made her grow up quick and taught her how to make tough decisions in life. Although it was only four years of her life, it had such a great impact that she believes her story is worth telling and wants to make a movie of her life. She said because of roller derby, she finished high school after skating and even went to college.

She and her husband have been working on the movie project now for 10 years and the momentum is picking up. The screenplay was recently completed by Tina Howe. McCoy hopes to sell the screenplay soon.

“I feel people can relate to my story,” she said. “The movie tells people to follow their hearts and don’t give up.”

If the movie gets made, it would be called, “Beyond All Odds, the Cindy McCoy Story.”

Henry said she admires the girls that skated with McCoy and said McCoy skated with some of her heroes, like Ann Cavello.

Like McCoy, she went through a training school, which for her lasted three months.

“I started doing this because I watched this growing up as a child,” she said. “After a year I got drafted onto the travel team.”

Henry said that the modern-day rollergirls are more athletes now than in 2001 when they started up again. The sport continues to evolve even today.

“We have taken away a lot of the crowd pleasers, there are less girls running around in fishnet stockings and girls are more serious about the sport,” Henry said. “We are trying to make it real. The sport has become something for women to do for themselves. I coach new players and they tell me, ‘I want to do this for myself.’ There is a fever out there and the fire is not going out.”

Henry is one of the oldest skaters on the team, as she is in her 40s.

“I have been skating for eight years and now I am the longest skating girl on the team,” Henry said. “I stopped jamming to prolong my career and now do the hitting as a blocker.”

According to Henry, there are four teams in Las Vegas, and two travel teams, a national team and a regional one.

“Many say roller derby saved my soul and it continues to do so,” Henry said. “Perhaps that is why I have held on to it so long.”