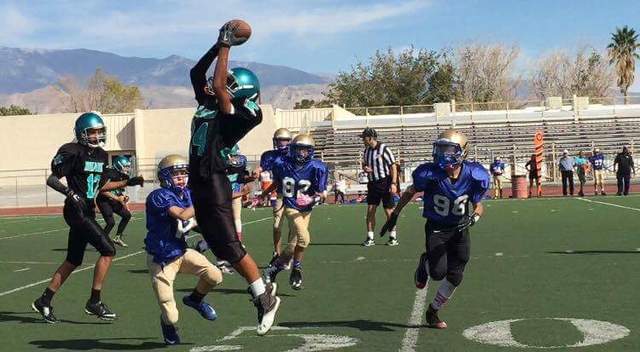 Rosemary Clarke Middle School football is well on its way to a winning season as they get their fourth win in a row to remain unbeaten.

It has been a journey for coach Dave Wright in his second year as head coach. Last year they had few wins because they were playing in a league way above their abilities. One supporter of middle school football even said they were playing ninth graders, but couldn’t prove it.

Wright put that year behind them and sought out mostly middle schools this year instead of playing club teams.

The Sharks beat Calvary Chapel 46-24 recently and travel to play Faith Lutheran this Saturday at 10 a.m.

The middle school continues to teach the high school offense.

Clayton started this tradition some years back; Gent did it last year and this year Clayton continued it.

The dividends will pay off. This way when the players come up to the high school they are familiar with the terminology and don’t have to learn a new system.

“On offense we use three of his formations, ‘ace,’ ‘rhino’ and ‘elephant,’” the coach said. “I modified the rhino and elephant to an “I” because I like to use power formations. We ran Jet but ran a trap out of all three formations that worked well.”

Another high school program one might have heard about that does this is Pahranagat Valley. They currently have a 99-game winning streak going.

They start teaching the high school system in their version of Pop Warner.

Currently, in Pahrump, the youth football team has also followed the lead of the middle school.

“The 12 and under team has been learning a few of the plays, basic concepts of the jet sweep,” Johnny O’Neal, president of the Pahrump’s youth football league said.

To run the high school system, the lineman have to be quick for the guards have to pull alot. This simply means they are running ahead of the running backs to block. For Wright, being on the line is not just about size.

“Our offensive line was not large but very athletic,” the coach said. “The guards, Anthony Pearson, Francisco Soto and Christian Santistevan pulled on the traps and have done a good job. Since we had success running, all our passes were run out of play action which worked out well also.”

Like high school, the middle school has to deal with athletes not being able to play.

“Due to injury and eligibility, we rotated many players in key positions,” Wright said. “For example, we used three different QB’s – Armani Cox, Cameron Gabrylczyk and Antonio Margiotta.”

The defense has improved since last year.

“Defensively, we ran a 4-3,” the coach said. “The difference this year from previous ones was our ability to contain the outside with our cornerbacks and linebackers.”

The coach believes his players will do well at high school.

“If this group of eighth graders continues to progress and learn to rely on each other as a team, they should make the high school, their parents and the town something to be proud of,” Wright said.