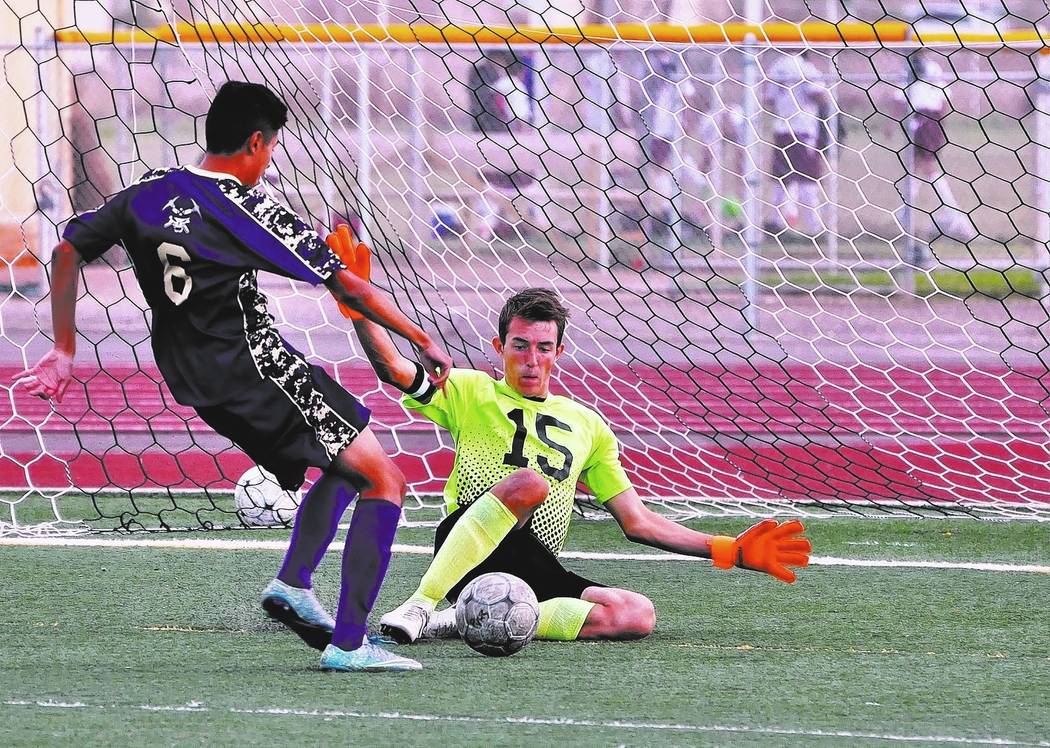 Horace Langford Jr./Pahrump Valley Times file The Nevada Interscholastic Activities Association has put a soccer mercy rule into place. The rule involves ending a game at the sixtieth 60th minute (or at any time thereafter) if/when the score differential is eight or greater.

The Nevada Interscholastic Activities Association at the last board meeting on June 19 changed the rules in two sports for the upcoming school year.

The two rule changes will affect soccer and golf.

“Boys golf, like girls golf, will now ‘play six’ but only ‘score four,’ Donnie Nelson assistant director of the NIAA said. “The board approved this to match up boys and girls golf for a variety of Title IX type reasons.”

Pahrump Valley High School golf coach Bob Hopkins had this to say about the rule change, “I really don’t care how many we count for it’s what we do in the girls and so we will be fine,” he said. “I am just glad they kept six being able to golf.”

“It will be better for us (a small school), as we have a hard times meeting team requirements as it is,” Otteson said. “It will be easier to fill a team for us. This was talked about at the state tournament a little by the coaches as a way to have more team scores. We have had only four team members many times and have not scored as a team, and what’s sad is we would have placed as a team using the four scores but because we only had four scores instead of five, we got no score and did not place.”

After a lot of complaints over the years, the NIAA has finally come up with a soccer mercy rule.

“We have never had a soccer mercy rule in the past, so this is a place to start,” Nelson said. “The soccer mercy rule will be to end a game at the 60th minute (or at any time thereafter) if /when the score differential is eight or greater.

“Even if a team leads by eight or more goals at halftime, the game will still continue until at least until the 60th minute (20 minutes into the second half for regular varsity contests),” Nelson said.

He said the coaches didn’t want the games to end at the half.

“They still wanted some time to be played in the second half even if the lead was at eight at the half,” Nelson said. “So, 20 minutes (half of the second half) was just a general agreement.”

“It lets the league coordinators know the balance so they can try keeping the divisions more competitive. The mercy rule is stupid,” he said.