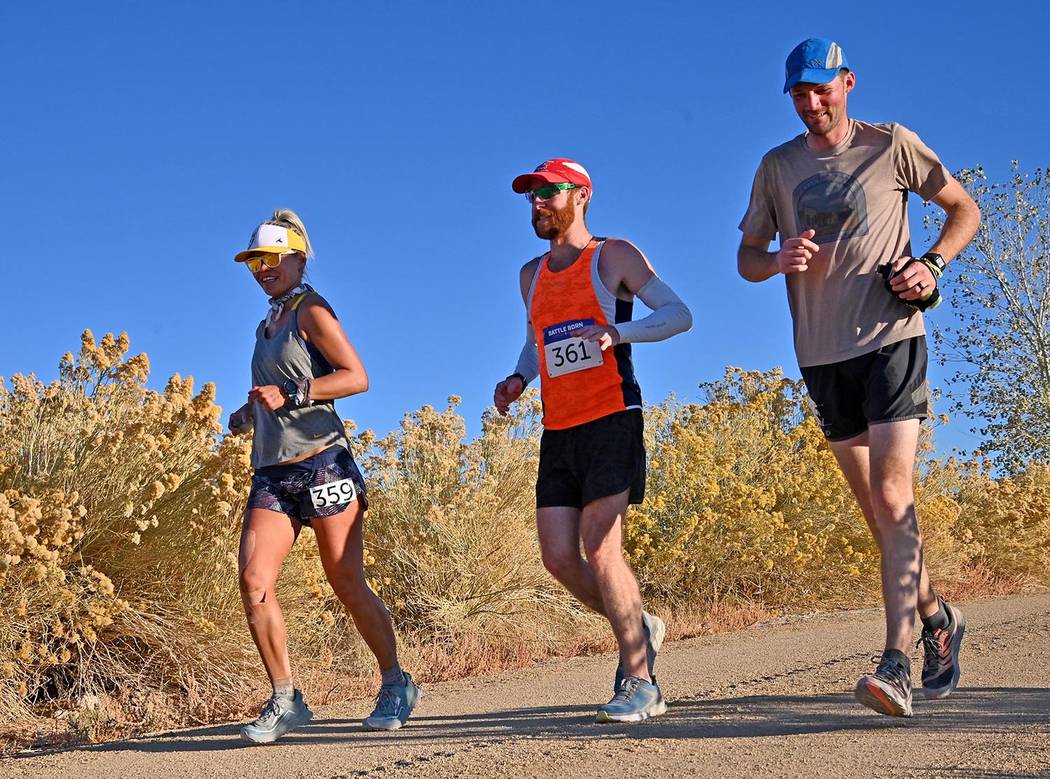 Richard Stephens/Special to the Pahrump Valley Times Maia Detmer, left, of Las Vegas completed 21 laps of the Beatty Backyard Ultra, but her 21st lap ended so close to the start of the next one that she dropped out of the race. 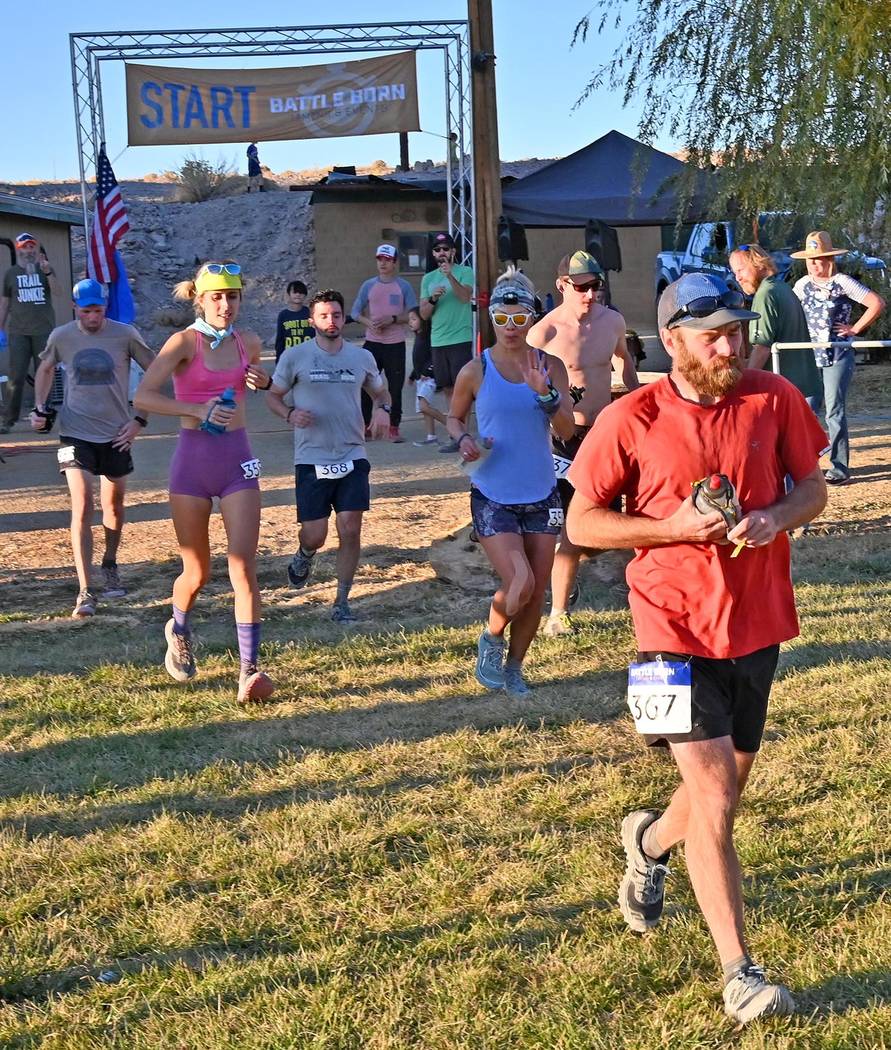 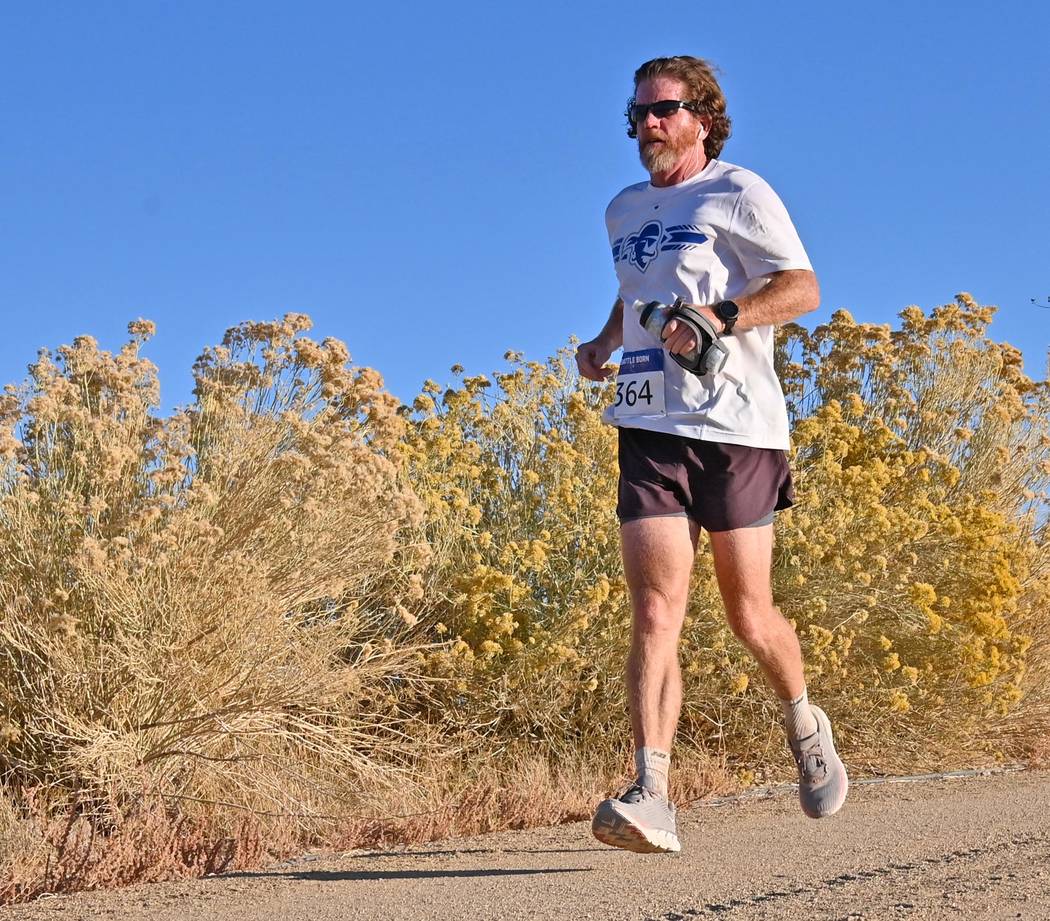 Richard Stephens/Special to the Pahrump Valley Times Mike Lynch, 55, of Las Vegas, completed nine laps of the Beatty Backyard Ultra, running almost 38 miles before dropping out to save himself for another race this weekend in the Valley of Fire.

Sixteen men and two women left the starting line in the Beatty Backyard Ultra on Saturday morning at Spicer Ranch. By that afternoon, after nine laps, half the field already had dropped out.

Runners had to finish each 4.16667-mile lap within an hour, as a new lap started every hour. The only rest runners got was between the time they finished a lap and when the next one started.

It was not a contest in speed but in endurance. It continued until only one runner was left standing. This meant running around the clock, without sleep, until the end. As it turned out, the end came 21 hours later, when the last two runners had each completed 88.2 miles.

To put that distance in perspective, it is longer than three regular marathons. It is like running from the main intersection in Beatty down U.S. Highway 95 to Nevada Highway 160, then on through Pahrump to a few yards shy of the turnoff to Tecopa Road.

Winner Daniel Probst, of Washington state, finished lap 21 with enough time left to get a bit of a breather, but the one-minute warning bell was ringing as Las Vegan Maia Detmer came in, and with no time to recuperate, she opted to drop out.

Mike Lynch of Las Vegas, who dropped out after nine laps, or almost 38 miles, to save himself for a race he was running the next week in the Valley of Fire, said, “The two women here are tough. When I was young I thought I could beat any woman. That’s not true anymore.”

The 55-year-old Lynch added, “The young kids are getting faster, and we’re going slower.”

The Beatty Backyard Ultra is sponsored by Desert Dash of Las Vegas. It is an affiliate qualifier for the Big Backyard Ultra in Bell Buckle, Tennessee. The unusual 4.16667-mile distance is the same as in that race. Outstanding runners in qualifying races are allowed to enter the major event.

As the last man standing, Probst gets a free entry in next year’s Beatty Backyard Ultra.

The Beatty event took the place of another race in Desert Dash’s calendar that was canceled due to increased permit costs and time delays.

Dave Spicer said that the Beatty Backyard Ultra was pretty small this year, but he considered it a good start.