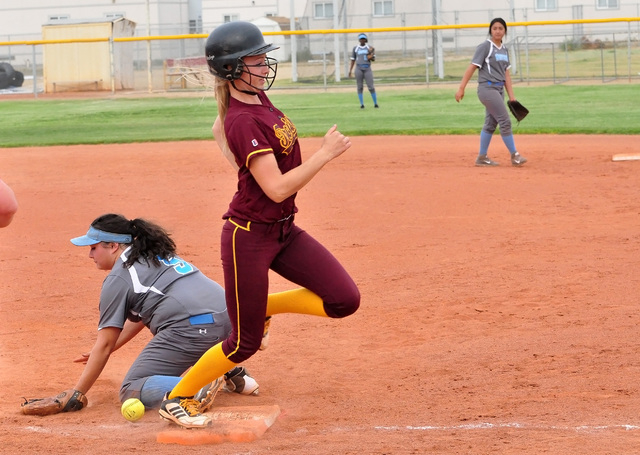 Sophomore Adrianna Sandoval pitched a perfect game to lead Trojans softball to a 21-0 rout of Clark on Wednesday. Sandoval was helped a lot by Pahrump’s great defense.

Trojans coach Ely Armendariz said he watched a hit late in the game go to the outfield.

“I thought the no-hitter was gone when I saw that ball hit,” he said. “But the rightfielder threw the runner out at first.”

The coach knew what his team faced before they got to Clark (0-14 overall, 0-9 Sunset League). The Trojans had beat them at home earlier in the year 14-3.

The coach did everything he could to not run up the score.

“We brought Sandoval up from the junior varsity team to pitch,” Armendariz said. “Stobbe (Jackie) was the only varsity player that played her regular position at second base.”

He added most of the underclassmen got playing time.

The Trojans (12-6, 7-2) went through the batting order in the first and third innings.

They scored 8 in the first, 3 in the second, 4 in the third and 6 in the fourth. The game was called after the fifth due to the Mercy rule.

Among the 17 hits during the game, sophomore Alyvia Briscoe hit a two-run inside-the-park home run.

The girls travel to Sandy Valley for their next game, which should be tough. Spring Valley is tied for first with Sierra Vista and they will be looking to get revenge because Pahrump is the only conference team to beat them. The Trojans are fighting with Faith Lutheran for the third-place spot.

“The girls know what we will be up against,” the coach said. “This pitcher is fast like our old pitcher Whitney Roderick or faster. I expect her to start the game.”

He said that because the last time Pahrump faced the Grizzlies (14-3, 8-1) they pitched their ace, Michaela Hood only part of the game and they lost to the Trojans 3-2.