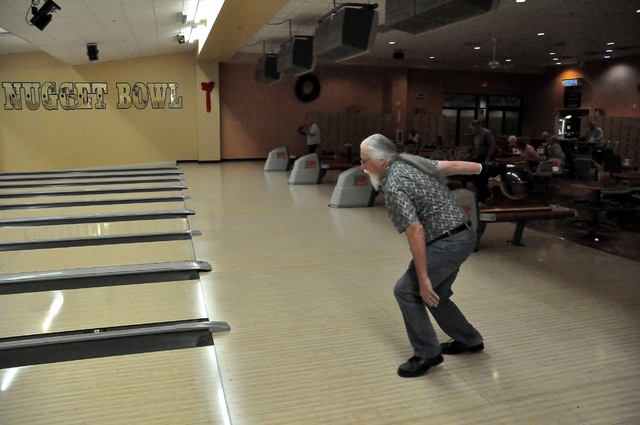 Horace Langford Jr. / Pahrump Valley Times - Bowler Steve Loeck bowled four strikes in a row as the PVT snapped these photos of him at the Pahrump Nugget Bowling center on Monday. 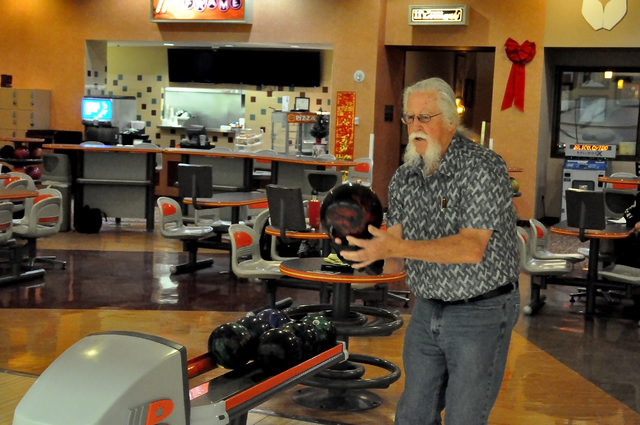 Horace Langford Jr. / Pahrump Valley Times Bowler Steve Loeck on Nov. 17 bowled two 300 games in a row. It was his first time bowling a 300 game and his first 800 series as well that day. 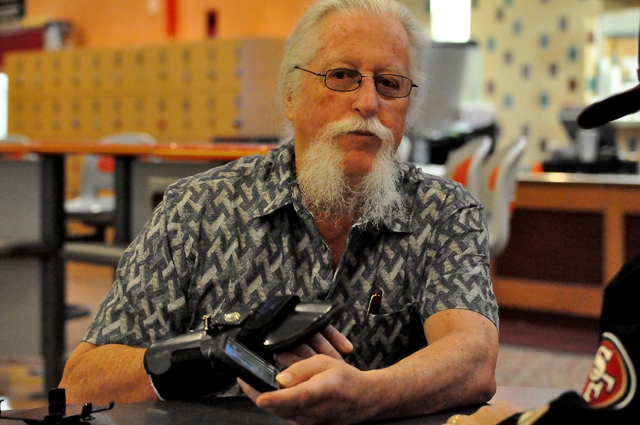 Horace Langford Jr. / Pahrump Valley Times Bowler Steve Loeck lives six months of the year in Pahrump and the rest in Sterling, Alaska. His two passions in the world are bowling and fishing.

Bowling can be nerve-wracking, especially if you are bowling with friends during league play and they are all watching your every move.

This happened to bowler Steve Loeck (pronounced Leck), a Pahrump bowler who had his best bowling day of his life when he bowled two 300 games in row on Nov. 17.

“So I bowled the first 300 and then started bowling the next game and noticed I was still throwing strikes. I noticed that it was still there,” Loeck said. “And so I threw frame by frame. I had to relax so I decided to talk to other people while I wasn’t bowling so as not to think about it. By the tenth frame of the second 300 I was really nervous and I knew when I threw the next ball that it was wrong, but I still got a strike.”

He said that was his lucky ball.

“I then threw it wrong again and got another strike. On my last frame I asked Nocky (Roach) to calm me down.”

In the end, throwing the 300s was a complete shock to Loeck and it still hasn’t sunk in.

For Loeck these were his first 300 games he ever threw and he also got his first 800 series, bowling an 812.

He said that bowling the 800 series was actually more exciting and he explained his reasoning.

“Back in the days of wood lanes it was harder to bowl a 300 game because of the grooves. With synthetic lanes it has become easier to bowl a 300. Today it’s all about the ball. I have nine balls but carry three with me. But I keep the balls here in a locker so I can always get one out if I need it.”

He has been out here since 2009 and is 72 years old. Loeck bowls just when he is out here. So he is out here for six months and then spends six months in Sterling, Alaska where he owns a home on the Kenai River. There his passion is fishing for salmon, which he does every day he is there.

“Where I live in Alaska there is no bowling alley. I live 2.5 hours out of Anchorage. When I am fishing up there I fish for red salmon and silver salmon. I have lived in Alaska, where I ran a hobby and craft store since 1977 and I retired in 2008.”

Loeck’s bowling story started when he was 12 years old in a junior league in Fullerton, California.

“My grandfather taught me how to bowl, he really didn’t know a lot and taught me a lot of bad habits. I quit doing it when I was 15 and then took it up in my twenties, where I bowled in Costa Mesa, California. But I really didn’t get into it until 1977. I’ve bowled every year since with an average around 180-195.

Although bowling has been a passion for Loeck it’s not one that would make him play in tournaments.

“I have really never done any state tournaments or anything like that. I never had the confidence to do that. Now I don’t know if I have the confidence now, but I feel better. I also still feel young I just want to keep doing what I like to do.”

He says he is able to do that because he tried to eat right and stay active all his life.

“I still like to take walks with my girlfriend and I am probably able to do these things because of my family, in general, has longevity.”

He attributes his average getting better to the practice sessions he has with a good friend of his, Terry Ryan.

“I never have been good at bowling,” Loeck said. “I have a lot of bad habits and Terry has been helping me with that.”

Lori Smith, the bowling manager at the Pahrump Nugget Bowling Center said she really couldn’t remember this being done by any other bowler except Nocky Roach. One other bowler, Mike Reynolds, did two in one day but not two in the same game.