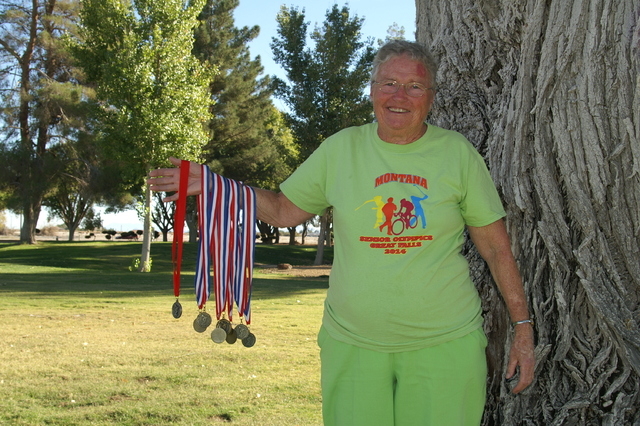 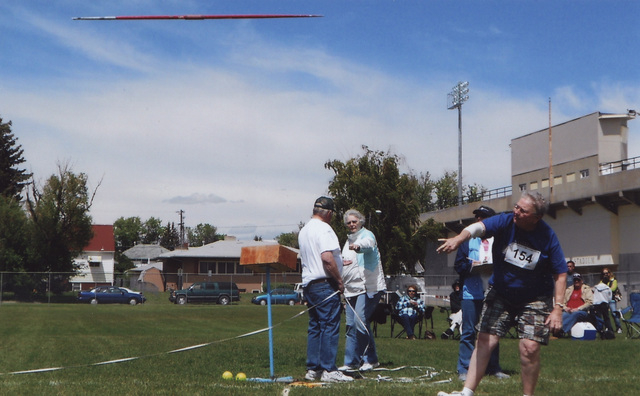 During the year the Pahrump Valley Times celebrates the seniors who are still getting out and being active. Betty Heil is one of those athletes who is 85 and still loves to compete.

Heil uses the summer to drive to Montana where she competes in the summer senior games, which were held in Great Falls, Montana from June 19 to 21. The Montana games attract about 300 participants each year.

She won three medals in golf, two in bowling, and three in track and field this year.

The senior Olympian says that the hardest event for her is the shot put. She had a special shot for her age division that she was supposed to use at the last games, but ended up using a heavier shot.

This year Heil threw the discus 37 feet 8 inches. She had some fierce competition in this event and beat her competition by almost 10 feet. She also threw the shot put 18 feet and set an open record.

Heil started these games when she and her husband, Miro, retired from a long career in farming and ranching in Montana. She said her family ranched with a pickup and she never learned to ride a horse.

“I went out to Montana and had full intentions of learning to ride a horse after I got married. We even had one, but someone stole our saddle and I never learned,” Betty said.

The two seniors came out to Pahrump in 1991 to escape the harsh Montana winters. At first the two of them were just snow birding. It wasn’t until after her husband passed away in 2007 that Betty built a house in Pahrump in 2008.

In the beginning, she went to the Huntsman Senior Games in St. George, Utah. She had seen the games when her husband was alive. The two enjoyed bowling together and playing golf there.

“I started the senior games at St. George 20 years ago,” she said. “I saw them competing and said to myself, ‘I can do that.’ I did the Huntsman games for several years and then I found out that they had the senior Olympics in Montana.

One would think that Betty was a lifelong track and field athlete from high school, but that was not the case. She learned to play the majority of the sports during her five-year stint in the army during the Korean Conflict. It wasn’t until 1991 that she learned the track and field events for the first time when she was 65. She does the games to be active.

“I did this because I really don’t like exercise,” she said. “I like to do things. I also ride a bike two to three times a week. The Olympics keep me going.”

When she was a girl growing up in Ohio, there wasn’t a lot of sports she could get into. While married and ranching in Montana, she said they lived too far from town to be active in sports.

Now, Betty prefers attending the games in Montana to the ones in Las Vegas. She believes the Las Vegas games take too long.

“The Las Vegas games are spread over three weeks. For every little event you have to drive into Las Vegas. For example, for golf you have to play 36 holes of golf. Where in Montana you just do 18. It’s just because I know I can do well in one day of golf but not two,” she said.

Every year she hops in her car and drives around 6,000 miles during the summer. She not only goes to Montana for the games, but also drives to Minnesota and other places to see family and friends. She said being 85 has not slowed down her road trips.

Betty’s goal is to go to the nationals in Minneapolis St. Paul and she said her goal was to place in the track and field events. She takes the game seriously.

“I definitely don’t do this to socialize with the other athletes,” Betty said. “I can sit on a 4,000-mile plane flight with someone and say 10 words the whole trip. I have decided that if you were good in golf when you were younger then you are good when you are old.”

Betty stresses seniors who are active must know their limitations.

“My limitations are all in my mind,” she said. “Last summer before I went up to Montana, I did a few arm exercises because all the things I do involve my right arm and right now it makes a little squeak. Hopefully, it will hold out until July. If I am not hurting, I will do it. If it hurts too much I won’t. I know I don’t stand as steady as I should, but I am still upright.”

She believes seniors need to be active as much as possible and says she thrives on the competition. She says she wants to encourage other seniors her age to get out of the house and get involved in some activity.

Betty believes the key to her activity has been her attitude.

“I don’t do too much to excess, but eat too much,” Betty said. “I think the key is I just like to play. I always wondered what I would do when I retired and these games are what I do, instead of raising chickens, candling eggs and making jams and jellies.”