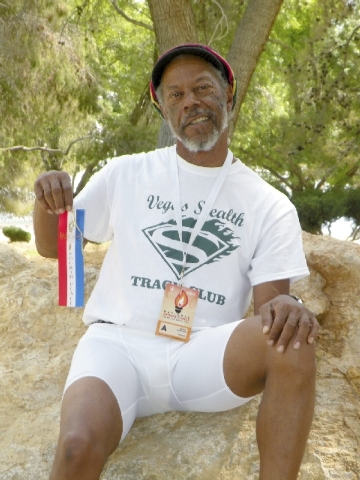 About 11,000 senior athletes from the ages of 50 to 101 from all over the United States converged on Cleveland. They competed in 19 sports.

The senior is a 58-year-old resident of Pahrump, who came to this town 11 years ago to get away from the big city of Las Vegas. He is retired from the gaming industry and now has time to pursue his running.

Caperton is reliving his youth and trying to be the fastest man in the world for his age division.

He is a former University of California at Los Angeles football wide receiver and track star. In football, he played for Dick Vermiel.

He has competed in the senior games in Las Vegas for the past eight years and usually takes first place in the 100-meter dash and the 50-meter dash.

Caperton said it’s all about getting off the couch at his age.

“I started running again when my daughter started doing track at West High School in Las Vegas. I got her to run the 400-meter in high school and she did well,” he said.

He recommends everyone should be active once they hit the senior years.

“I don’t have the endurance now,” he said. “I have less stamina as I get older. I really did not notice it when I was 50. I remember doing the same workout as the kids back then. Now my workouts are less strenuous.

“As a senior you are more prone to injury. Not serious injury, but little strains or groin strains. As soon as you get one you just have to ease back into it. I had to be very careful and warm up a long time, and I did lot of stretching. You have to walk and then start to jog. The key is to start. Once you start, the bug bites and you get in shape and do it.”

Last year he ran in the regionals in Las Vegas to qualify for the nationals in Cleveland. The nationals were a humbling experience for this one-time world class sprinter.

In Cleveland is where he suffered his first losses, but he felt he still was the fastest in Las Vegas. Or was he?

“I tell myself that I am the fastest man in my age division in the world,” he said. “I smoked my competition in Las Vegas and got a big head. I went to a competition after the games in Henderson and actually got beat in the 50- and the 100-meter there. This guy beat me in the 50-meter first and before the 100-meter, I said, ‘I am beating this guy. I am not going to lose to him.’ In the race, I was in front of him and then he passed me and beat me.

“I was surprised. He came up to me afterwards and congratulated me and I found out he was 52. He was in a different age bracket, but still I had not been beat in Nevada and that made me a bit more humble. That let me know I was not the baddest man in the world anymore. There are people faster than me. I still aspire to be the fastest man in my age division.”