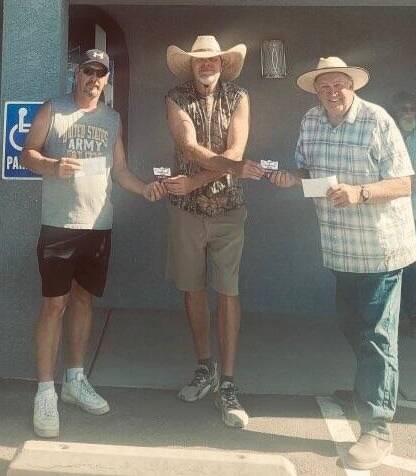 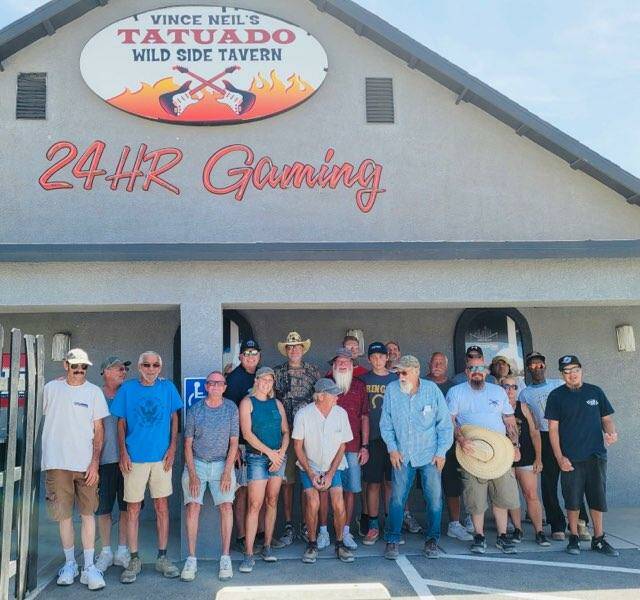 Special to the Pahrump Valley Times The Shoes & Brews Horseshoe Pitching Series held their final event at Vince Neil's Tatuado Wild Side Tavern on Sunday, May 22, before taking a break for the summer months. The season will resume in September. 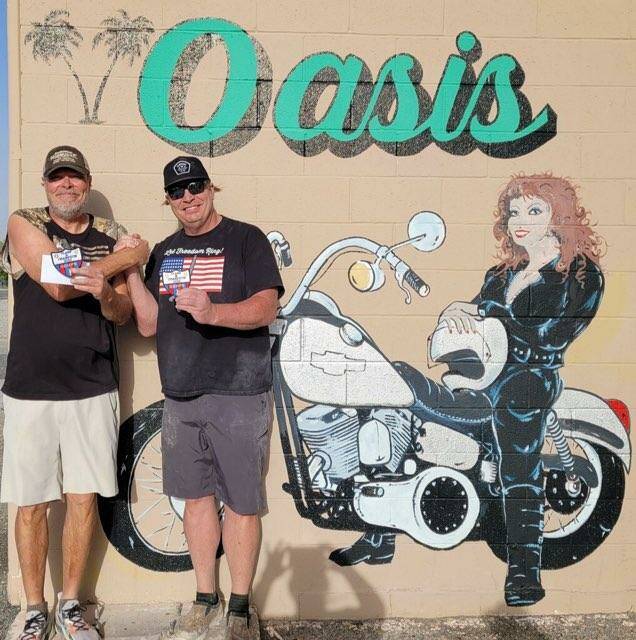 Special to the Pahrump Valley Times Lathan Dilger (left) and Gary Dilger (right) pose with their series champion patches after taking first place in the Shoes & Brews event that was held at the Oasis Bar & Grill in Indian Springs, on Sunday, May 8.

The Shoes & Brews Horseshoe Pitching Series has reached its halfway point in the season following their most recent May events.

The first Shoes & Brews event in May took place on Sunday, May 8, at the Oasis Bar and Grill in Indian Springs.

The tournament had 14 pitchers participate. They were split into seven teams of two pitchers, an A division pitcher and a B division pitcher. The teams were created using a blind draw to make all matchups as fair as possible.

The teams played a mini tournament to determine the final positions.

For their finishing spot, each pitcher was given 10 points toward their season total, along with 50% of the cash prize pool and a series champion patch.

Lawrence Workman and Kevin Chael finished the tournament in second place following their defeat to the Dilgers in the final round of the playoff tournament.

Each of them were awarded five points to be added to their season totals. In addition to the points, Workman and Chael received 30% of the cash prize pool to split.

Dilger and Russell defeated the team of Don Brown and Sheri Dilger during the playoff tournament to secure their top-three spot.

For their third-place finish, Dilger and Russell received three points toward their season total and they split the remaining 20% of the cash prize pool.

Following the Shoes & Brews tournament, a 50/50 raffle was held and Benny Sanchez came away as the winner.

On Sunday, May 22, the Shoes & Brews held their seventh event of the 2022 season at Vince Neil’s Tatuado Wild Side Tavern located in Pahrump.

The team of Dennis Anderson and Heath Russell took home first place. They had to beat the second-place team of Lawrence Workman and Gary Dilger twice in a row in order to win the tournament.

The first game was to tie for the top spot, the second game was to win the playoff between the two teams. Going into the first matchup, Workman and Dilger were undefeated up to that point and Anderson and Russell only had one loss.

For their win, Anderson and Russell were each awarded 10 points, a series champion patch and they split 50% of the cash prize pool.

Workman and Dilger were each given five points and they split 30% of the cash prize pool for the second place finish.

The third and final spot of the tournament went to the team of Don Brown and Christy Russell. They were each given three points to be added to their season total and they split the remaining 20% of the cash prize pool.

Lathan Dilger, the president of the Nevada State Horseshoe Pitching Association, would like to thank the staff at Oasis and Tatuado Tavern for hosting the events.

The Shoes & Brews Horseshoe Pitching Series has now reached its halfway point in the season and will be taking a break for the summer months.

Anderson currently leads all A division pitchers with 30 points on the season. Lathan Dilger sits in second place with 20 points, while Lawrence Workman is in third place with 18 points.

In the B division, Heath Russell finds himself in first place with 23 points. Chuck Smith still sits in second place with his 18 points, while Gary Dilger is moving up the leaderboards with his recent win and sits in third place with 15 points.

The season will resume on Sunday, Sept. 11, at Moose Lodge #808 in Pahrump. All participating pitchers should be signed in and ready to play by 6 p.m.