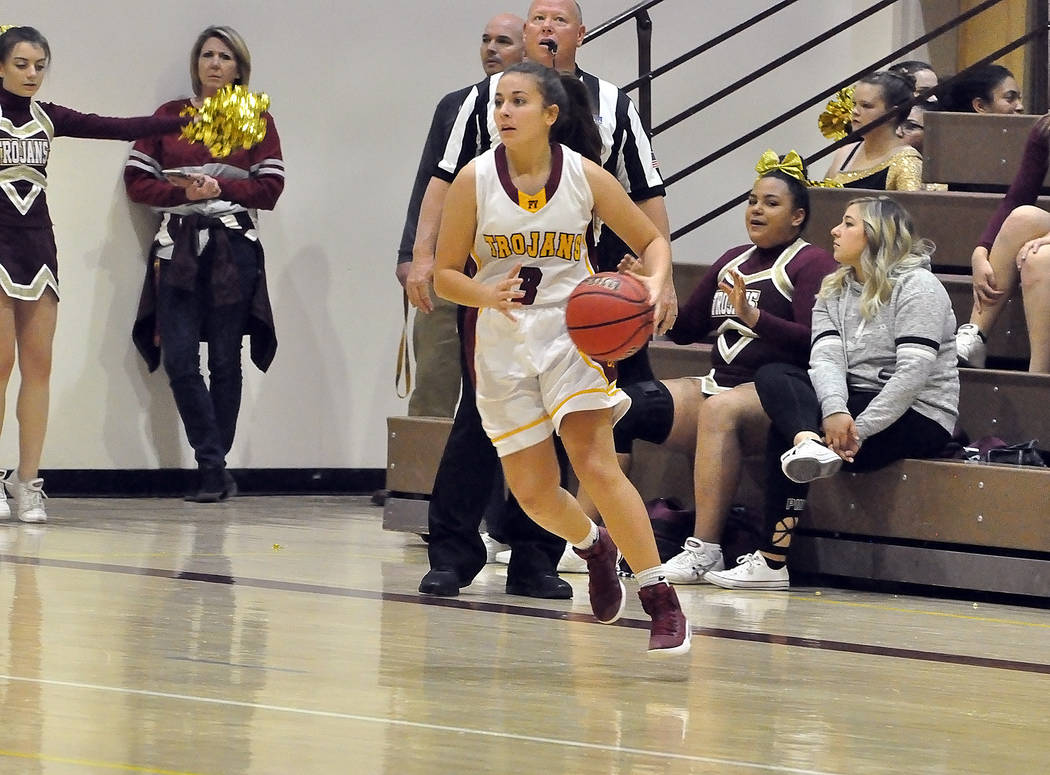 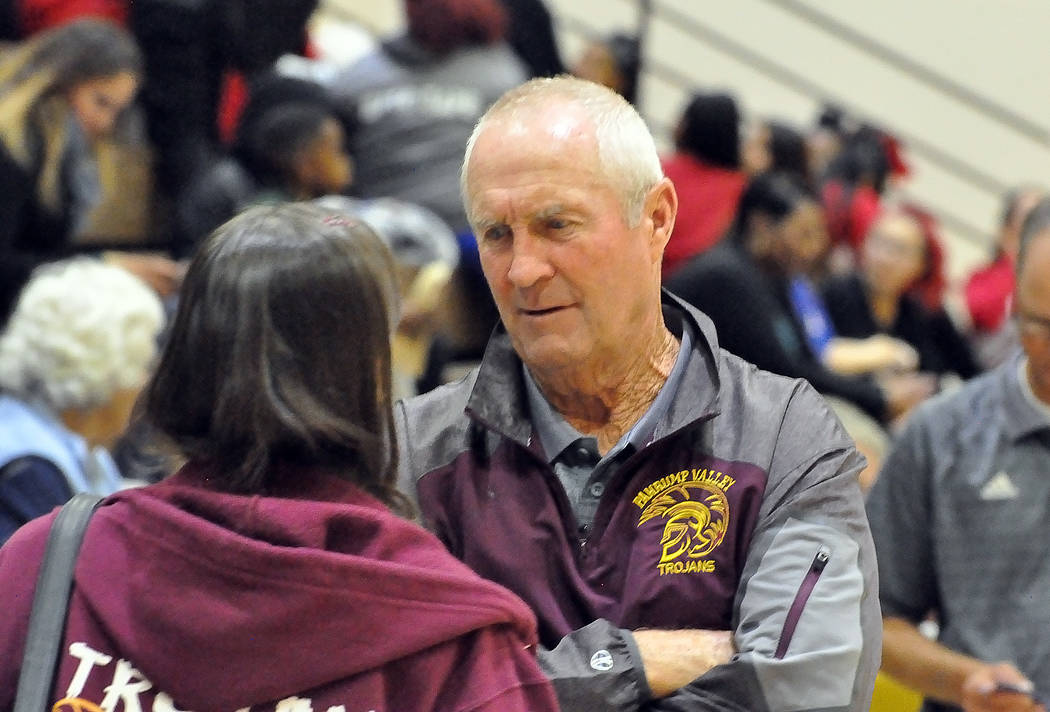 Horace Langford Jr./Pahrump Valley Times Veteran Pahrump Valley girls basketball coach Bob Hopkins has been extremely pleased with his defense and disappointed with his offense during the Trojans' 9-6 start this season.

Bob Hopkins has coached a lot of basketball games, and he has well more than 500 victories in his long career. But the Pahrump Valley High School girls basketball coach is searching for answers to his team’s offensive woes.

“Hopefully, our shooting will come,” Hopkins said after a 36-31 home loss to Moapa Valley on Friday night. “I don’t know what else to do.

“We’re getting good shots, but we’ve got to get the ball in the hole.”

Kylie Stritenberger and Jackie Stobbe each scored 8 points to lead the Trojans (9-6), and that wasn’t nearly enough against the Pirates (6-4), who were led by Lainey Cornwall’s 14 points and 10 from Kaitlyn Anderson.

“Physically, they’re not any better than us,” Hopkins said. “They have a couple of real good scorers in Anderson and Cornwall, and that’s why we went triangle-and-two. We did a pretty good job, except I told the girls at halftime we’ve got to keep them off the free-throw line. And we didn’t do that.”

It’s usually simplistic to say a game was won or lost at the free-throw line. Usually it’s more complicated than that. But the numbers jumped off the page Friday night. Moapa Valley went to the line 26 times and connected 21 times, an outstanding 81 percent clip. By contrast, Pahrump Valley was a disappointing 7 of 18 from the line for 39 percent.

The game was tight throughout, although Moapa Valley held the lead throughout the first half. The Pirates led 6-4 after one, and the free-throw shooting began to play a role in the second. Moapa Valley made 6 of 8 from the line during the period, while Pahrump Valley shot 4 of 8 and trailed 17-16 at the half.

The Pirates’ press bothered the Trojans throughout the game, although Hopkins acknowledged their press should not have been as effective as it was.

“When we took care of business like we’re supposed to, we were fine against it,” he said. “I think there were eight or 10 times we broke the press and then threw it away after we got it down there. We’re in too big of a hurry.

“That’s not as hard a press as we’ve been against. We’ve just got to take care of the basketball.”

And yet, despite the poor free-throw shooting and the turnovers against the press, the Trojans and Pirates were dead even at 28-28 with 3:17 left in the game. But that is when Stritenberger, who was called for three offensive fouls during the game, fouled out.

Junior guard Andalin Hillstead was fouled while hitting a 3-pointer from the corner on Moapa Valley’s very next trip down the court. She missed the free throw, but the 6-foot Sam Runnion was forced to join the 5-9 Stritenberger on the bench with five fouls with 2:24 left.

The Pirates drove toward the basket the rest of the way, with freshman guard Emma Humes icing the game with a driving bank shot for a 5-point Pirate lead and then, after two Stobbe free throws, hitting two free throws the other way for a 35-30 lead with 16.3 seconds left.

Holding a decent offensive team to 36 points will be enough most nights, but Hopkins boiled the Trojans’ situation down to one simple sentence.

“Defensively I can’t say enough about the kids, but offensively we’ve got to get the ball in the hole,” he said.

The Trojans have another game before taking time off over the holidays, with Sunrise Mountain making the trip to Pahrump for a Friday night game.

They will then be off until the Gator Winter Classic on Jan. 2-3 in Henderson.