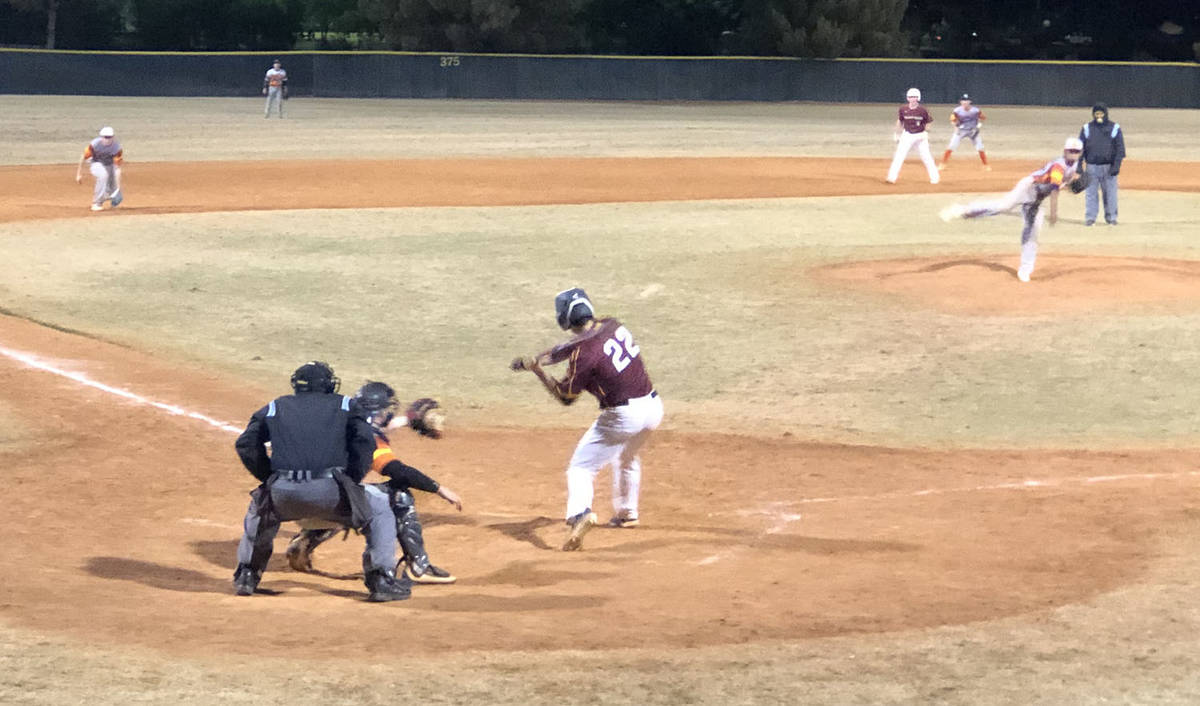 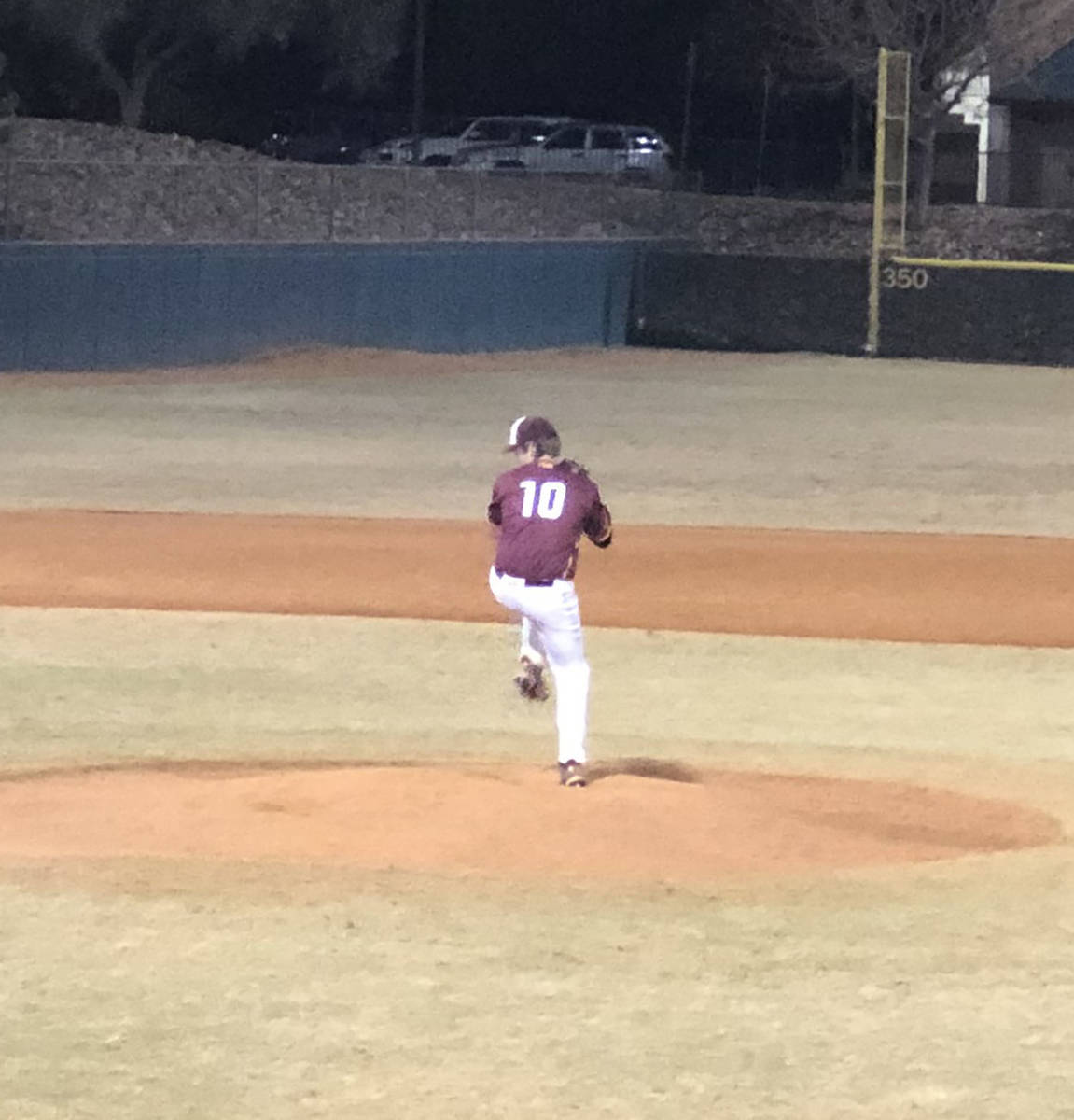 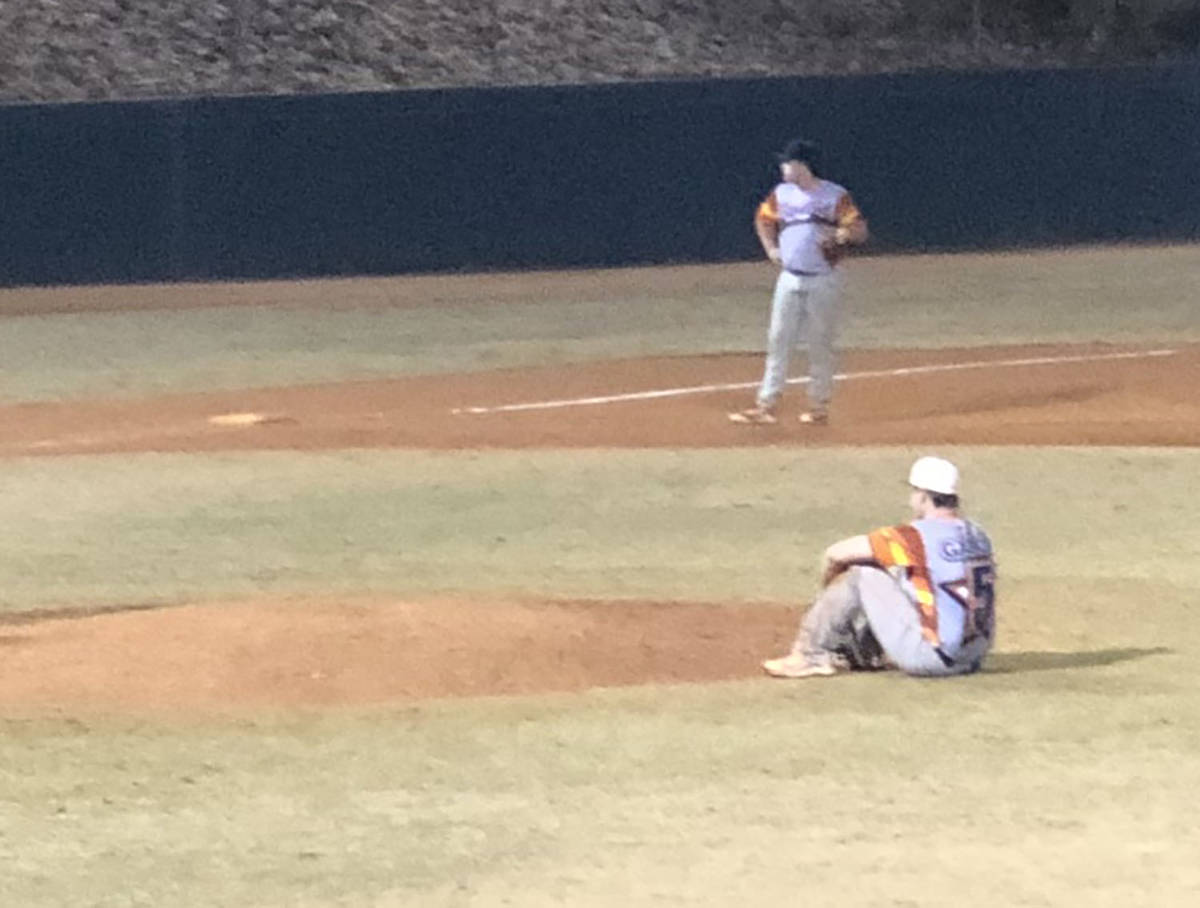 Tom Rysinski/Pahrump Valley Times Las Vegas Sandlot players had time on their hands Friday night while waiting for their coach to leave the field after his ejection during the third inning of Pahrump's 10-2 victory at the Arroyo Grande Sports Complex in Henderson. 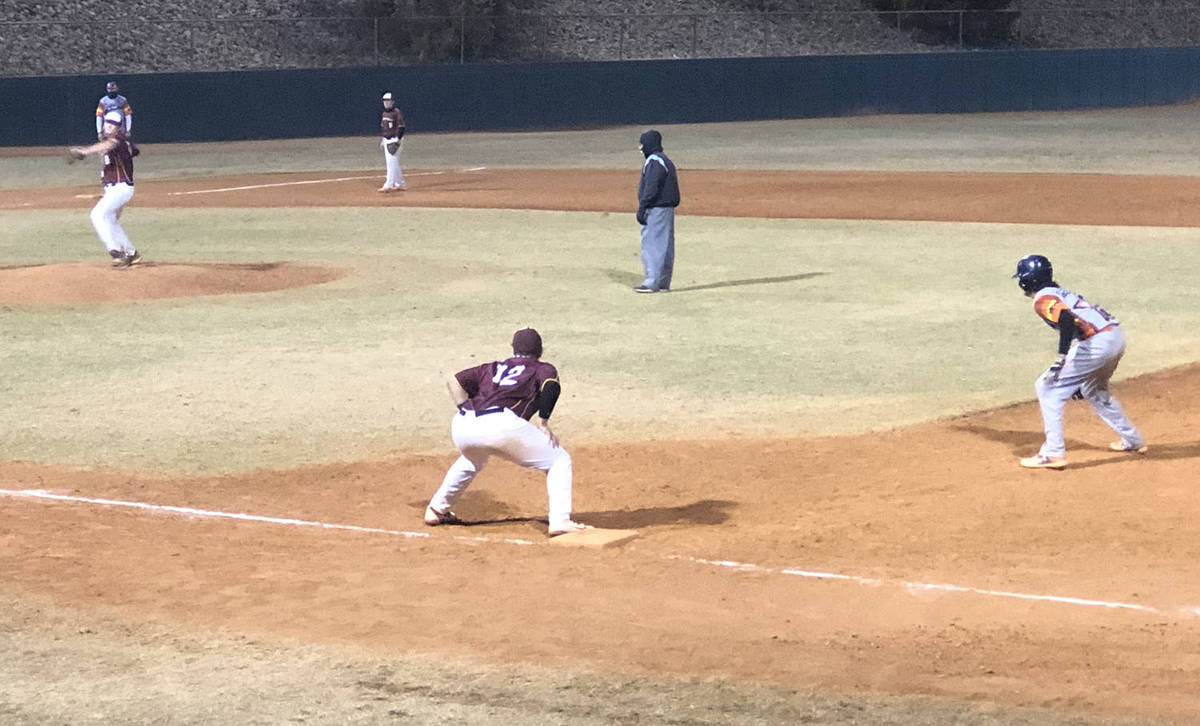 Tom Rysinski/Pahrump Valley Times Dallton Norland waits for a pickoff throw while holding a runner on during the Pahrump Trojans Gold's 10-2 win over Las Vegas Sandlot on Friday night. Norland capped a 6-run first-inning rally with a 2-run double into the left field corner. 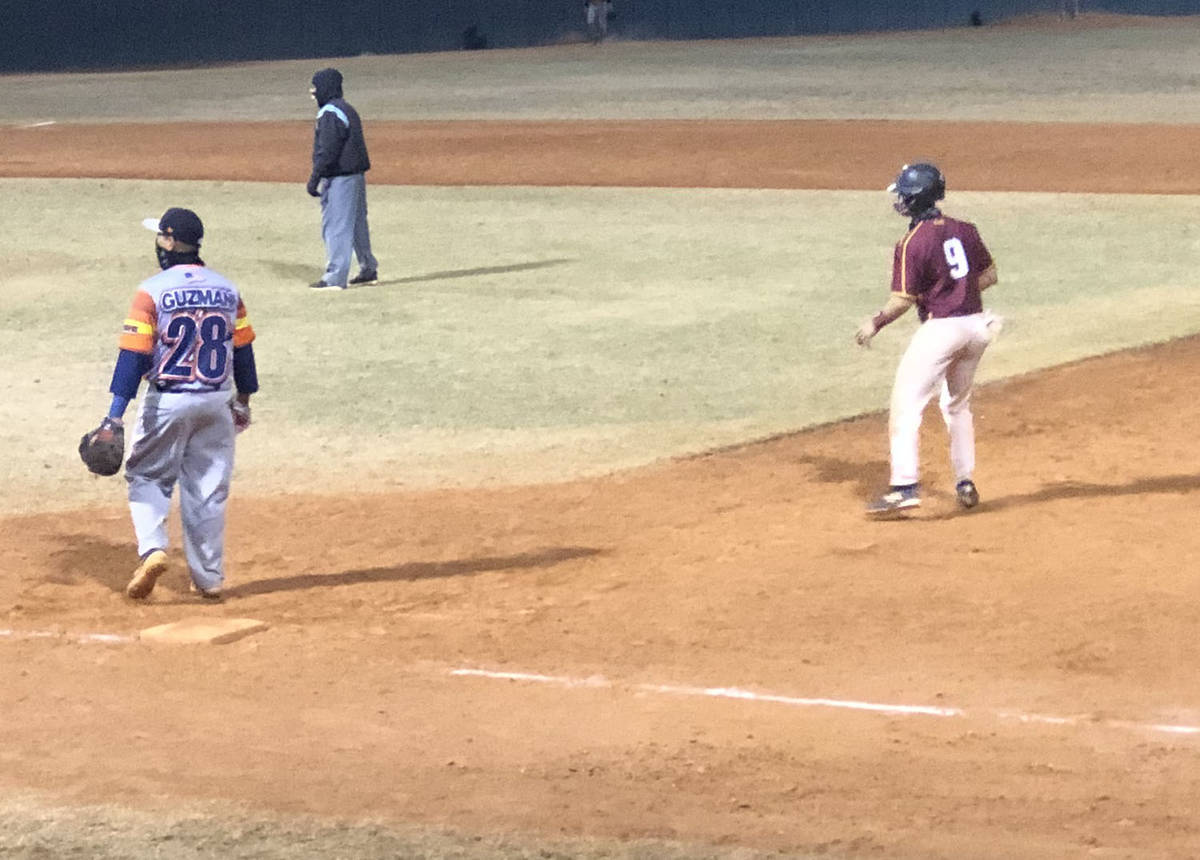 But scoring 6 runs before the opponent comes up to bat doesn’t hurt either.

The rally started simply enough when Kyle McDaniel, first-pitch swinging, singled to left with one out. Riding followed with his blast, a high, deep shot just left of straightaway center field that scored McDaniel.

“I thought it popped up to second,” Riding said. “I didn’t think it was going to anywhere close to that far.”

“Off the bat I thought it was going to the shortstop, then it just kept traveling and traveling,” agreed Trojans coach Drew Middleton. “We just hit the ball really well tonight.”

Jalen Denton followed with a walk, then Ryan Braithwaite singled to center to score Riding and took second on the throw home. After Zach Cuellar’s grounder scored Denton, Coby Tillery walked and stole second to bring up Norland.

The first baseman ripped a two-run double into the left-field corner to score Braithwaite and Tillery, put the Trojans up 6-0 and effectively ending the game.

“You’ve got two strikes, and I was looking for a curve ball, so I sat back on it and just had fun with it,” Norland said.

Meanwhile, the Las Vegas side was having no fun at all. The lead was 8-0 in the third after run-scoring singles by Cuellar in the second and McDaniel in the third when the Sandlot manager got himself tossed for arguing a call.

Strangely, the call he argued was not a mystifying safe call when Fidel Betancourt “stole” second, but a bang-bang play at first when McDaniel was safe on an infield single. “Even Fidel said he was out,” Middleton noted.

Not only did he pick the wrong call to argue, he started his tirade by cursing out the base umpire, prompting a quick ejection, and then took a long time to leave the field, holding up the game. The Sandlot pitcher sat behind the mound, calling out, “We’re all waiting for you,” during the petulant escapade.

When the coach finally left the field, Riding singled to right to drive in the ninth Trojans run.

Las Vegas could not score during its first two innings against Riding, who was unhittable. He struck out four over his two innings, allowing only a two-out walk in the first. Denton, McDaniel and Braithwaite each pitched an inning to finish the rout.

“Jake was lights out,” Middleton said. “With our second game being canceled, we had to get guys work. I was only going to give him one, but then he throws like 11 pitches in the first inning.”

“I pitched last weekend against Boulder, and I was pretty dominant,” Riding said. “I think only one person got on from a walk. Same thing today. I’ve been feeling really good throwing, feel like I have control over everything.”

Riding was just as effective at the plate, going 3 for 3 with a sacrifice fly, a run scored and 3 RBIs.

“I’ve been in a big slump basically this whole season,” Riding said. “I didn’t really change anything.”

McDaniel reached base on all four at-bats, scoring 3 runs with an RBI; Betancourt reached base in all three plate appearances and scored twice; and Cuellar drove in 2 runs. Every Trojan reached base at least once.

“Our message coming in tonight was playing a full game,” Middleton said. “We’ve had trouble playing a full game this fall. We did a little bit better tonight, but we still left a lot of opportunities out there. We had five errors tonight, walked some guys later in the game. We want to end better. We took a step in the right direction tonight.”

The victory left the Trojans at 3-2 in the Vegas Valley Baseball League. Their scheduled doubleheader Friday night at Heritage Park in Henderson has been postponed because of a positive COVID-19 test.