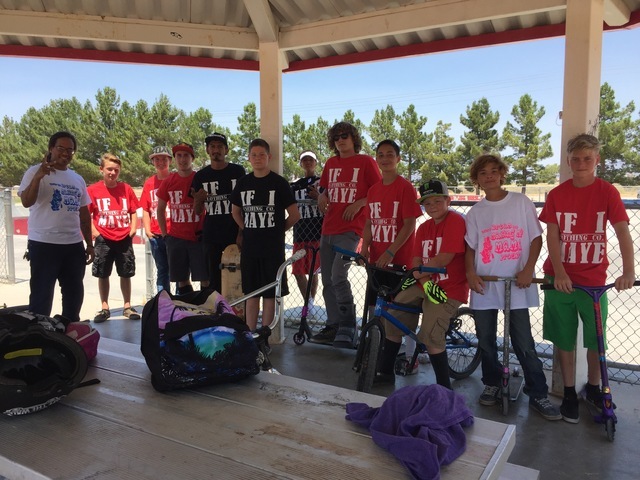 Mike Maye, a local business owner of If I Maye Clothing Co, hands out free T-shirts to the kids at the skate park to let them know that he is raising money for renovations at the park. 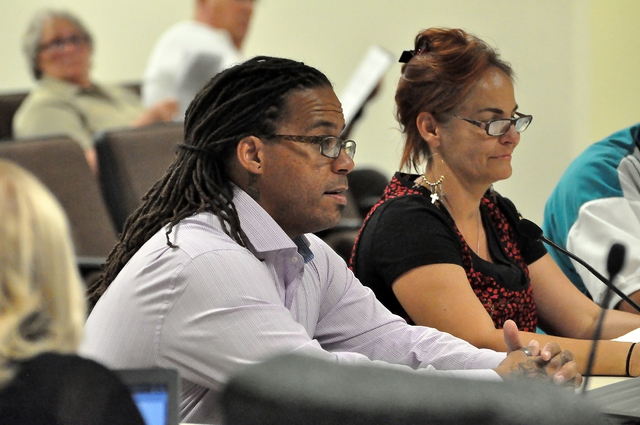 Horace Langford Jr./Pahrump Valley Times Mike Maye, left, owner of If I Maye Clothing Co, speaks at the county commissioners meeting in support of new lighting at the skate park. At right, Susan Gresham, another supporter of skate park renovations, has fought for renovations at the skate park for the last three years.

In the ongoing battle to improve the skate park at Ian Deutch Park, Nye County commissioners approved a proposal that would allow funds to be raised to go toward the installation of a properly developed lighting system designed for skating to illuminate the skate park.

According to the owner of If I Maye Clothing Co., Mike Maye, who is one of the organizations in town spearheading the fundraising for the park, he has three years to raise $45,000 for the project.

I am selling T-shirts that my company is providing to raise money for the skate park, Maye said. I was out at the park giving away the shirts to get the word out that we want the skate park improved. I am also looking into grants.

Maye said fifty percent of the T-shirts will go to the fund and the other will go to producing more shirts.

The shirts are designed by Maye. In addition to clothing, Maye is also a professional drummer and hopes to bring some bands to the valley to raise funds.

I also hope to bring a battle of the bands concert out to Pahrump in September to raise even more money, he said.

The commissioners said three years gives the organization time to raise sufficient funds to pay for the lighting, which said lighting must be in compliance with sports lighting standards.

Maye is not the only person working toward improvements at the park. Susan and David Gresham have been working to improve the park for the past three years.

We are doing this because if you invest time and love into your community you are investing in its future and showing the future generation how to give back to their community, Susan Gresham said.

The project has had problems getting off the ground.

Six months ago we had a corporation helping us out that had plans for a $132,000 skate park, but this corporation lost support of their board and now we are back to square one, David Gresham said.

Susan Gresham said she hopes the project gets a shot in the arm with the approval of a county grant this year. The group had applied last year but the commissioners voted for another project, (each year the commissioners give out a block grant to a project they feel is worthy). She feels she has enough county commissioner support this year and remains positive.

Susan Gresham said there is more work than just lighting.

There are cracks in the concrete too, Susan Gresham said. We need a big upgrade to that skate park.

She also feels that having Maye enter the fight has given their efforts a big boost.

According to David Gresham, Maye just wants to help the communitys young people and he likes Mayes enthusiasm and energy.

He is a take-charge young man and he wants to pay it forward, David Gresham said. I was 11 when someone showed me how to pay it forward. It was an elderly couple in Indiana, where I grew up. They started a program with the YMCA called Teen Town. This couple dedicated their lives to the young people and I want to do the same and pay it forward.

Susan Gresham calls Maye an answer to her prayers.

I think we have been blessed, she said. I have been praying for years now for good people to help us out.

The Greshams said Parker Kawasaki and Bob Adams, an an official of the Motorcycle Racing Association of Nevada, have also been supportive of the skate park project.