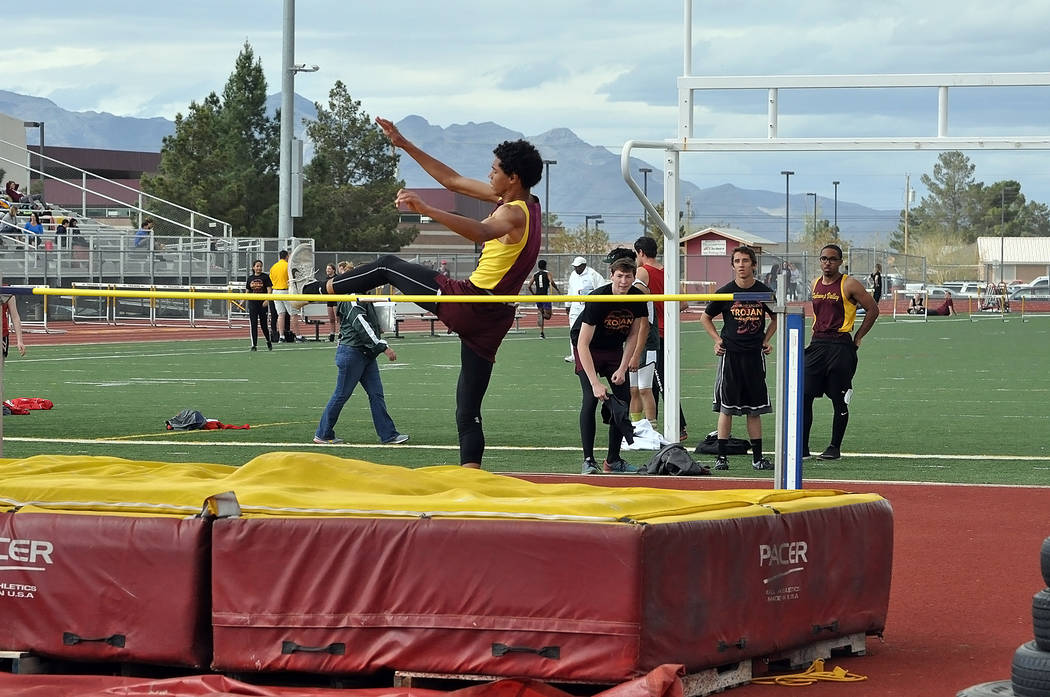 Horace Langford Jr./Pahrump Valley Times Pahrump Valley junior Ethan Whittle was one of seven jumpers to clear 5 feet, 6 inches to tie for 13th in the high jump last weekend at the Skyhawk Invitational at Silverado High School in Las Vegas. 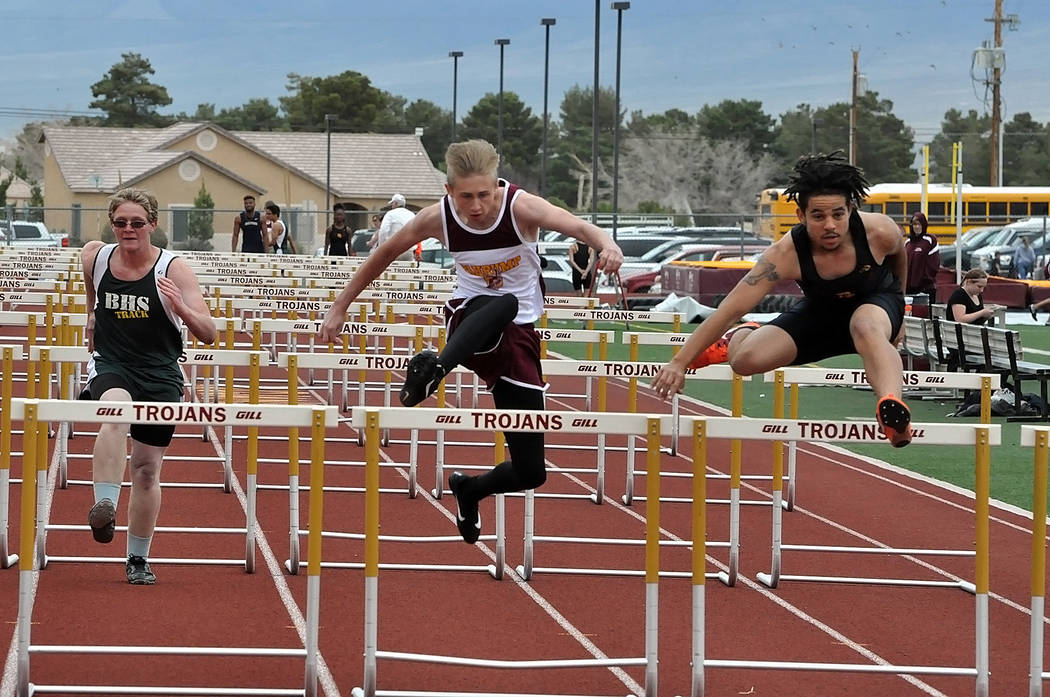 Pahrump Valley track and field athletes showed off some postseason form last weekend when the Trojans traveled to Las Vegas to compete in the Skyhawk Invitational at Silverado High School.

“The picture from this invitational of 34 teams shows those athletes that remained focused were rewarded with a continued upswing in PR marks and times,” Schmidt said, referring to personal records set at the meet.

One of the strongest events for the Pahrump Valley boys was the 800 meters. Senior Bryce Odegard led the field for 740 meters before being caught by Green Valley’s Martin Nelson in the final 60. Odegard’s second-place time of 1 minute, 57.47 seconds was a personal best.

That is a large gap, to be sure, but only one competitor between Odegard and Layron Sonerholm, DeSaun Smith of Mojave, was from a 3A school and only four of the runners between the Sonerholm brothers were from 3A schools.

“So there is a very real possibility of qualifying three Trojan athletes for state competition in the 800,” Schmidt said.

Again, most of the runners between the Trojan trio were not from 3A schools — one was from Cheyenne and two were from Mojave — which Schmidt sees as another positive for regionals and state competition.

In a preview of what could be a terrific postseason battle in the girls 400, Gundacker set a PR by running 1:05.13 to finish 22nd. Just ahead of her were Cheyenne’s Germanie White (1:04.34), Sunrise Mountain’s Aiyana Ramirez (1:04.62) and Moapa Valley’s Alexis Schraft (1:05.03), while Ayala Harris of Cheyenne ran 1:05.26 to finish right behind her. That many 3A runners within one second of each other could make for a thrilling regional race.

“That puts Grace in a great spot to qualify for state with a repeat of that effort,” Schmidt said.

The Trojans were not quite as strong as Schmidt would have liked in the field events, but there were some solid performances. Junior Chase Farnsworth took fifth in the high jump, clearing 6-0, while classmate Ethan Whittle was one of seven jumpers who cleared 5-6 to tie for 13th.

“I know on the surface that is not impressive, but looking at the competition there were two league opponents ahead of Chance and only one between he and Ethan,” Schmidt said.

“We feel that as the team heads into this big portion of their season they will respond, and some of those athletes that have been a little too lax in their focus are seeing the value of an individual’s commitment,” Schmidt said.