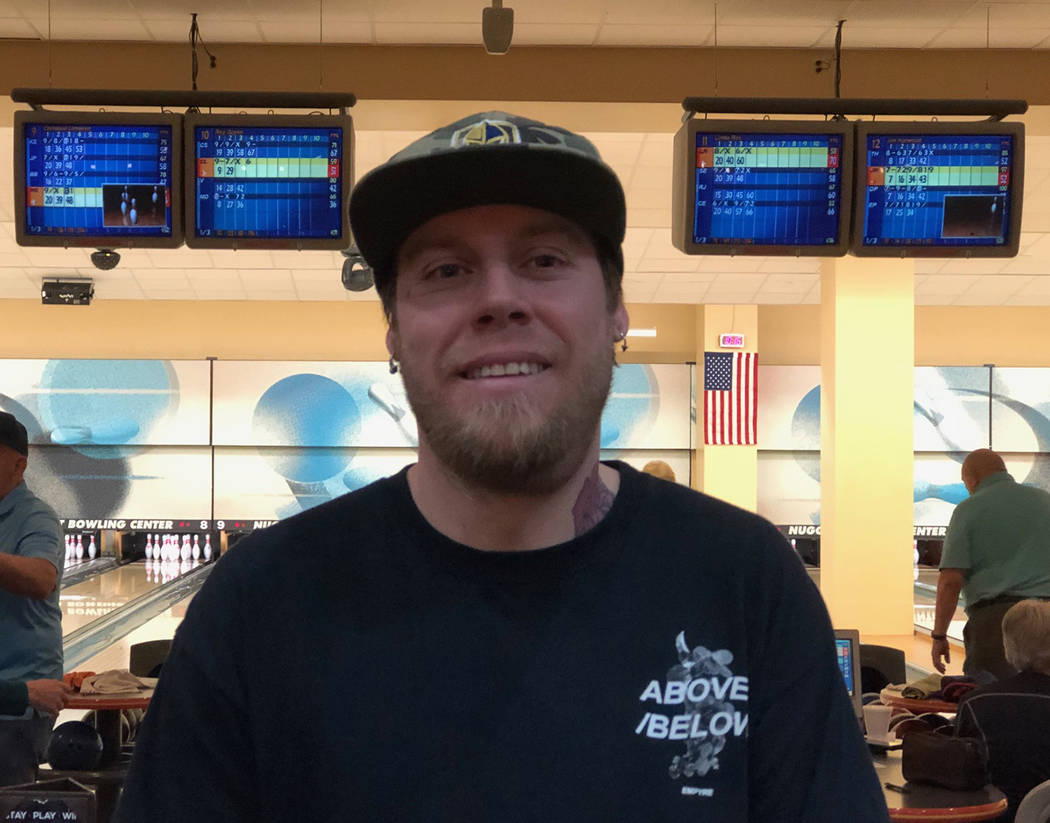 For years, you saw them on ABC on Saturday afternoons, with Chris Schenkel doing the commentary. Earl Anthony, Mark Roth, Walter Ray Williams Jr. and others, usually in some less-than-glamorous locale, literally went bowling for dollars on the Professional Bowlers Association tour.

Schenkel is no longer with us, and today’s bowlers are seen on FS1, but that makes no difference. Troy Smith wants to be one of those guys.

Smith, a native Californian who has lived in Pahrump for about a year after spending 10 in Las Vegas, rolled his first official 300 game Feb. 2 at the Pahrump Nugget Bowling Center.

“I rolled my first when I was about 10 or 11. And that wasn’t sanctioned or anything like that,” Smith said. “My mom worked at a bowling alley, so I was always practicing or throwing.”

Smith, 33, bowls in Friday morning and Saturday night leagues at the Nugget and also participates in tournaments and other bowling events throughout the year. It was during the Saturday Night Rollers league that he achieved perfection in the first game of what would be a 704 series, and he insisted he didn’t think about much until close to the end.

“Probably around the ninth frame,” he said. “I never try to focus on trying to get it. You end up screwing up or doing the wrong thing, throw it in the gutter or throw it down the center and end up splitting.

“Nobody talks to you, but you can feel all the eyes on you. You can feel everybody just standing behind you and staring. It’s very nerve-wracking.”

Smith said that, despite bowling since he was 3, he had not bowled in several years before moving to Pahrump.

“Vegas got too expensive, and we found a nice place out here with a lot of land for cheaper,” he explained. “As soon as we moved out here I did start bowling again because there’s really nothing else to do unless you want to lose your money gambling. I went into the pro shop in here and picked up a used ball for 50 bucks and started throwing it and getting back into it. Probably a good 12 to 15 years I hadn’t bowled.”

It seems like an unlikely path to not bowl for well more than a decade to trying to get on the PBA Tour, but Smith senses it’s the right time.

“I was a security guard for a scrapyard out here,” he said. “I worked for my uncle and recently stopped working that job and kind of want to make this bowling thing a career. I definitely want to get myself into the PBA.

“I believe everything happens for a reason. Going away from that job and just strictly trying to bowl as much as possible, it’s the only thing I really, really want to do. Why not do a job that you love than a job that you hate? I’d rather do this every day.”

Smith’s league average is 205, although he thinks his overall average is higher. “In tournaments I bowl completely better, 250s, 260s,” he said.

Luckily, the 116th United States Bowling Congress Open Championships will be in Las Vegas. The national tournament will be held May 27-28 at the South Point Bowling Plaza. There are three divisions: Regular, for those who average 176 and above; Standard, for averages from 156 to 175; and Classified, for those who average below 155. To participate, all anyone needs to do is become a USBC member.

“Nationals is a good step, and I’m going to be doing that,” Smith said of his path to the PBA Tour. “That will get my foot in the door. More people will notice me, I’m hoping that helps. Then asking around, asking certain people, guys in the pro shop, because they’ve done it, and just take it step by step. It’s just a matter of finding out when these events are and getting in them, qualifying in certain positions in whatever competitions you bowl in.”

Sounds simple enough, and Smith knows whose ranks he wants to join.

“Norm Duke, Parker Bohn, I grew up watching those guys,” he said. “I idolized Chris Barnes. I liked his style, I like the way he releases his ball. I liked Pete Weber, his excitement, his style. The explosions of energy that he’s got when he bowls. That’s my type of style. I like to have fun when I do it, I’m not a real quiet person when I’m bowling.”

Explaining how to master bowling is as easy as actually mastering it is hard.

“My problem is I just find a spot and stick to it,” Smith explained. “What you want to do is you want to find your boards, follow your arrows, and of course the oil patterns make a big difference, too. They can be different all the time. You’re going to want to stick to throwing it a certain way, but you’re going to come across another pattern that’s going to throw your ball off.”

Not that Smith lacks for advice.

“A lot of these older people (at the Nugget) have been bowling a lot longer than I have, and I take their pointers very seriously,” he said. “I’ve had my mom as my coach for years, telling me what I’m doing wrong. And my dad, that’s who I get it from, because he’s a very good bowler himself. And my son has taken steps to start to get into it, too. I bought him his first bowling ball maybe two years ago.”

It’s never too early to start, as Smith can tell you. So, if he bowled his first perfect game at 10 or 11, and another at 33, does that mean a third is in the stars when he’s in his mid-50s?

“I’m hoping a lot sooner,” he said with a laugh. “I’ve been very close a lot of times. This is my first real one.”

Two days after Smith rolled his 300, Keith Nelson flirted with perfection, coming within a pin of the magic number.

Smith was strong all night Feb. 4, rolling games of 222 and 224 to start. He had two open frames in the first game and none before the 10th in the second, picking up six spares along the way.

But that paled to the third game, when Nelson reeled off 11 consecutive strikes before leaving one pin standing on his final ball in the 10th. He wound up with a 299 game and an outstanding 745 series.