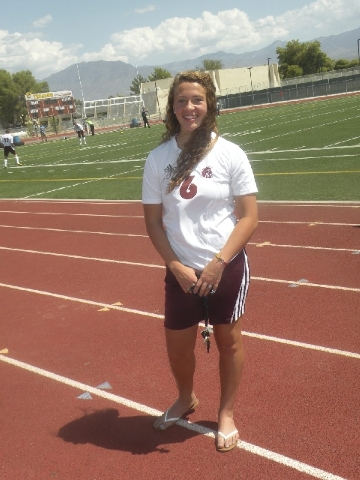 Junior Brittany Klenzcar is one of the defensive leaders for the Lady Trojans soccer team this year, but she has four more weeks before she can play again. She injured her knee experimenting with some softball during the spring and may have injured the meniscus in her knee. She had surgery four weeks ago and has several weeks before she can join the team. Klenzcar hopes to join the team for the start of conference play on Sept 17.

“I think I will just be playing soccer this year, no more softball for me. I like more physical sports,” she said.

This dynamic, hard-working athelete has been playing soccer since the fourth grade. She became part of Joe Sladek’s club team at the end of eighth grade. Sladek is the Trojans assistant coach and is the head coach for a Las Vegas club team called “Players.”

“They were looking for people for their club team and they didn’t have a striker,” Klenzcar said. “I came in as a striker from AYSO. It was scary at first. It was way different. The drills were way faster and the conditioning was way more. When I first joined the team the girls were really friendly. I was so intimidated at first because they were all so good, but they were all really accepting people.”

“Brittany is one of the few players that works her tail off to improve. I look for those types of players at any level of soccer and it never stops. She has the right attitude, but she can always do better. It has been hard not having her on the field for the last four weeks, even during training. The reason is some of the girls bring a higher level of competition to help even during training sessions. She does this.”

The junior agrees with her coach and says she has grown in confidence since first stepping onto the field with the Trojans.

Klenzcar wants to take her soccer to the next level and she is hoping to earn a good college scholarship.

“Once my knee is better, I hope to go get signed to something,” she said. “I want to go to college camps, and I am looking for colleges not too far from home — one of the states touching Nevada. Wherever I can get money from. I don’t want to go too far. I am willing to go to a Nevada school and want to major in physical therapy.”

Sladek said Klenzcar is looking for colleges at the right time.

“From the end of their sophomore year to the end of their junior year is the key time for recruiting. She is right in the middle of that, so she should be able to go somewhere,” Sladek commented.

“She always was a physical player. She has gotten stronger and better technically with the ball. She has played with me for a decade. Her freshman season she did that and her sophomore year she was good and this year she will be better.

“We definitely missed her last week when we played Arbor View. It takes a girl two to three years to get the style of soccer we play. She passed that point. She is ready to fill a key role on the back line,” he said.

Look for Klenzcar to come back strong. Even with her limited capabilities, she has been cleared to run a quarter of a mile and do passing drills during practice. She does as much as she can and can’t wait for the day she can do it all.

“As soon as my knee is back I am going full speed into everything,” Klenzcar exclaimed.

When asked how she handled being on the sideline for the scrimmage with Arbor View, she responded by saying, “I was coaching from the sideline. I was saying, ‘drop back, step up, be aggressive.’ These were all things I would do.

“The back four is something that stays the same, so it’s hard when new girls come in and are not used to our flow. It gets frustrating out there, especially when the game means so much to some people. You get automatically so annoyed.”

Last year the defender played with Kaitlin Klem, Alyssa Turner and Lexi Smith. This will be her first year playing without Klem.

“Our chemistry was off during Arbor View and that is pretty important. I have not played without Kaitlin, yet. I don’t think we will be too bad. I think we will still have a strong defense. It’s different. She was a big part of it.”

Klenzcar is not one to get upset on the field regardless of who she is playing against or with.

“I get mad, but I really don’t like to show it because I don’t like the negative energy. Plus, if I get mad, I play worse. So I focus and keep going,” she remarked.