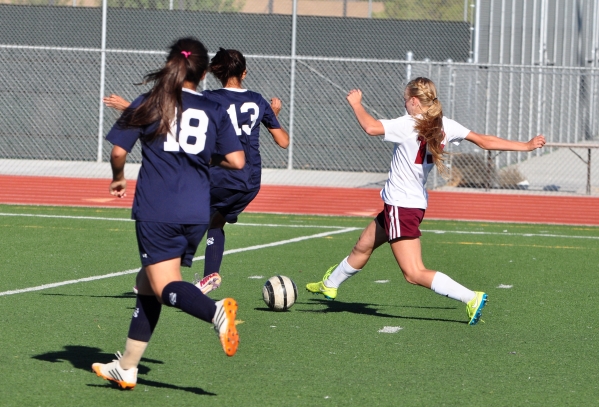 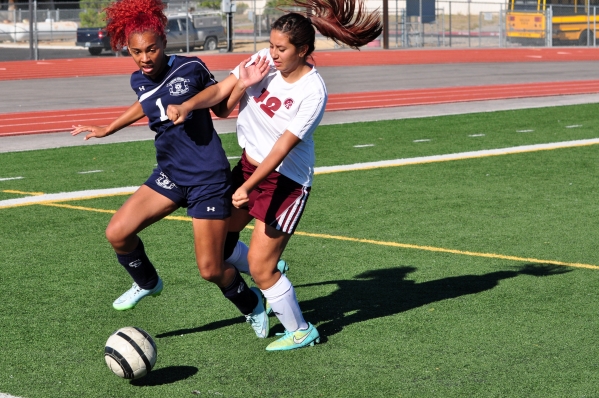 The Lady Trojans booters were not on pace to beat any speed records for scoring, rather they methodically took the ball downfield and just started taking shots and wore Canyon Springs down.

The Trojans (4-2 overall, 1-0 Sunset League) poured on the shots on goal in the second half and beat Division I Canyon Springs 4-1 in non-league play.This was the first of three straight home games for the girls.

During the first half, the Trojans had possession more in Pioneers’ territory, but only managed one score by Sydney Dennis to tie the game at the half, 1-1.

Trojans coach Pam Larmouth said her team took a whole half to get going.

“We spent a lot of time getting up to the goal and not shooting in the first half,” Larmouth said.

The girls exploded in the second half, scoring three more goals. Dennis scored one more, and Jaime Murphy scored 2 goals.

“We put Jaime up top to see if she would shoot and she shot twice and scored twice,” the coach said. “We had the same problem last year with scoring and we are hoping to get through that before too many conference games.”

The Pioneers’ top player, Sage Kruleski, scored the only goal and was shut down by the Trojans defense in the second half.

Pahrump played Clark on Thursday, who was ranked the tenth best team in Southern Nevada in the last coach’s poll, but has lost two league games in a row to Sierra Vista and Cheyenne. This game was past deadline.

The Lady Trojans hoped to pour on the offense again against Clark (3-4, 0-2) and now have 14 points in the last three games .

Larmouth is anxious to regain the dominance over Clark she experienced in 2013.

“When we played Clark in the Mesquite tournament, we had just lost our center back and leader of the defense,” she said. “We have rebuilt our defense to a certain extent and are trying to get them some experience working together, So I think that we will be able to handle their offense better.”