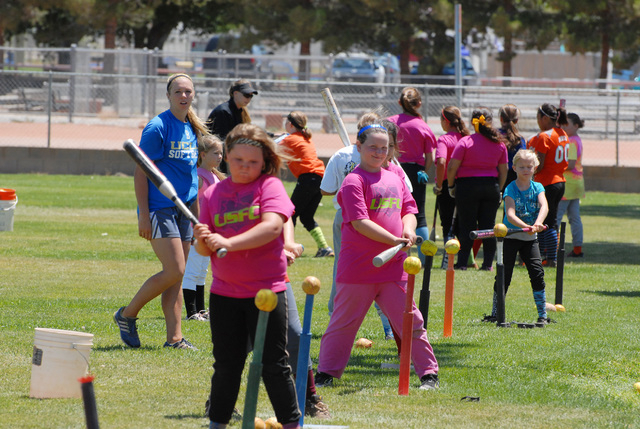 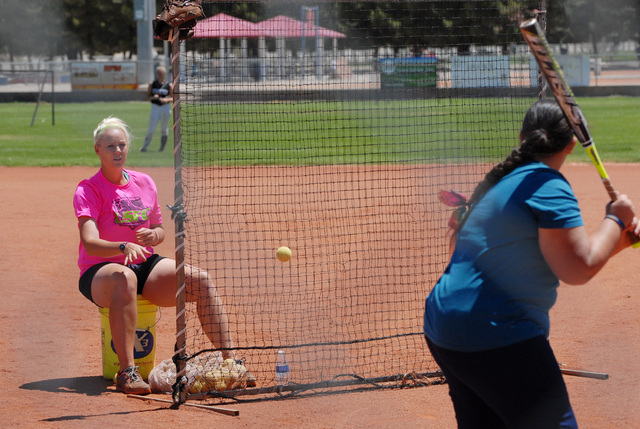 The Pahrump Youth Softball Association hosted a three-day softball camp put on by U.S. Fast Pitch Camps from Tuesday to Thursday at Ian Deutch park. Holly Wright, coordinator of the camp for PYSA, said a camp like this was necessary in Pahrump.

“It’s a great opportunity because we don’t have anything really close for these girls. What we learned with our oldest daughter that it only takes one little comment, or one little tip where these girls catch on. These coaches see the little things because they play university ball. It helps the girls tremendously,” Wright said.

Wright and her husband, Sean Mendoza, hope to start a new era in Pahrump Valley Youth Softball by bringing this camp to the area. They hope to see U.S. Fast Pitch here next season.

High school softball has brought a new interest to softball in the area. The numbers still are not where Wright wants them, but the fact the Lady Trojans softball team keeps winning does not hurt. The Trojans have been to the playoffs two years in a row and this year went all the way to the state semi-finals.

The Trojans inspire the girls to come out for softball and it showed with the number of the girls out for the camp. The camp attracted 31 girls and even some outside of Pahrump. Over 5 girls made the drive from Las Vegas.

Carlos Barron was one of the parents willing to drive to Pahrump to bring his daughter Penelope to the camp. Barron said his daughter is 10 years old and needs help in hitting and throwing the ball and she has only has one year of experience.

“This is her first offseason she has had and she is improving. She told me that this has helped her a lot. The coaches have a lot of patience and were relating well to the kids,” he said.

Penelope said she attends Findlay Middle School in Las Vegas and was having fun.

“The most important thing I learned in this camp is to always focus on the ball and pay attention to what is happening in the game,” she said.

Scott Hughey is also from Las Vegas and he brought four girls with him. He is a coach and just could not find a camp in his area.

“I came for the small amount of kids. We just don’t have camps where the kids get the one-on-one contact with the coaches, where the groups are only 10 girls. The biggest thing for the four girls I brought is the hitting.” he said.

Kaylee Wright is attending Rosemary Clarke Middle School and she said she was having too much fun getting dirty.

“I learned how to hook slide, and how to slide better,” Kaylee said. “You learn to slide around the bag, so that your hands are the only thing touching the bag. I love getting dirty,” Kaylee explained. She said hook sliding is necessary when you have a baseman blocking the base.

The camp covered all the basic skills and even went into depth on the most troublesome skill for young players — hitting. The camp coaches dissected the fundamentals into its basic parts. Whether it was scooting back on the inside pitches to creeping forward on the outside pitches, the young players took it all in.

The draw of the camp is having former and current softball players teaching the kids. This is like inviting major leaguers to Pahrump.

Nanchy said her former playing time and the number of years in the business gives her access to the players. She says she finds her coaches through word of mouth.

“I have been doing this for six years and I have worked with a ton of college girls. I take a lot of recommendations from college girls that have worked with me. I have contacted girls on Facebook and girls that are playing at the highest level, teams that are in the world series. I check to see what their interest is for working at camps and start communication with them. Anybody that is playing at that level I am willing to talk with them,” she said.

As far as how far they are willing to go, Nanchy said they travel across country.

“The communities contact us. We go anywhere where they have 30 kids for us,” she explained.

Nanchy says she only does this in the summer. During the school year she teaches special education at the high school she works at in Phoenix and coaches softball. This year her team went to state.

Johnson just graduated from Arizona State University where she majored in communications. She played softball for Arizona for all four years of college. She does these camps because it keeps her involved in the game and because she loves kids. She hopes to be a sports broadcaster.

“I was at Arizona State, on one of the best teams to play softball in my opinion. I had a lot of great experiences. I had great coaches that coached me what I know. I just want to return the favor,” Johnson said.