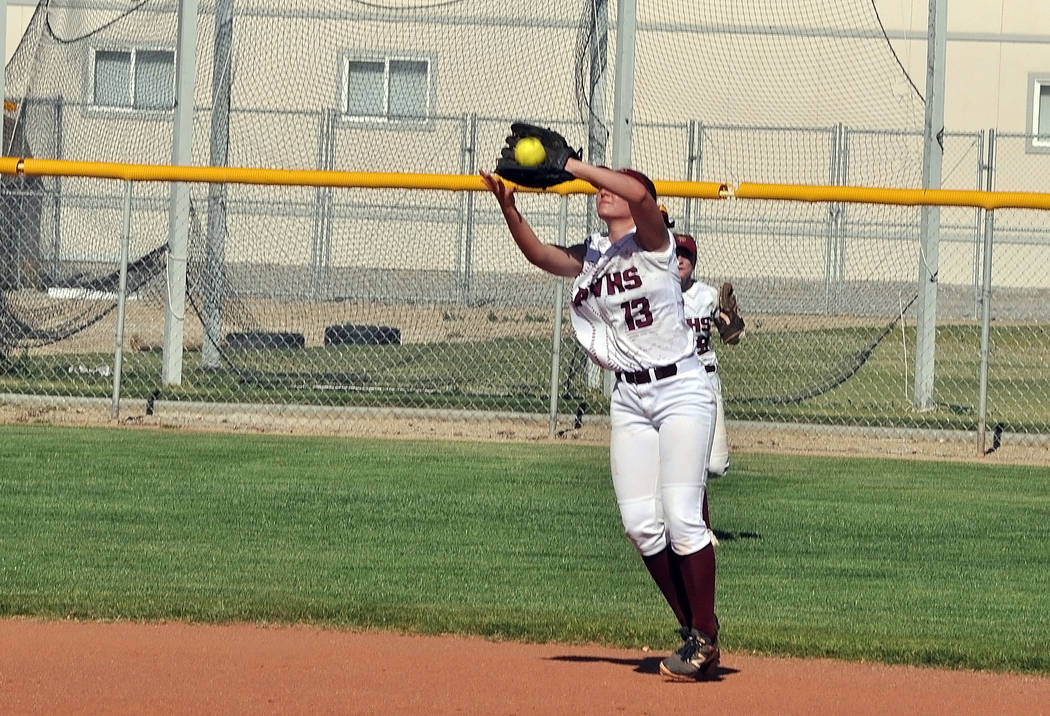 Horace Langford Jr./Pahrump Valley Times Pahrump Valley shortstop Jackie Stobbe makes a play on an infield fly during the Trojans' Class 3A Southern Regional Tournament game against Boulder City on May 9 in Pahrump. 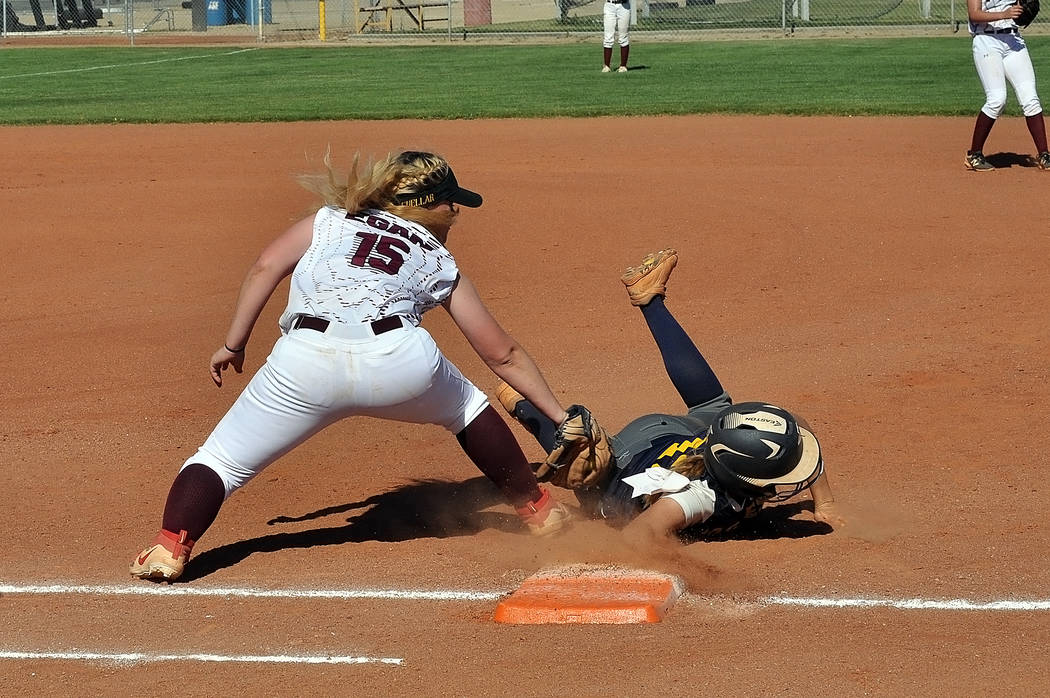 There was no mystery behind Pahrump Valley’s 8-2 loss to Boulder City on Saturday in the Class 3A Southern Region championship game in Boulder City.

Part of the equation was simply too much Bailey Bennett-Jordan. Boulder City’s pitcher was dominant, allowing just three hits, striking out six and retiring 17 of the final 18 batters she faced, including 14 in a row. No ball left the infield between the second and seventh innings, so part of the problem clearly was Bennett-Jordan.

“That, and we were out late last night,” Pahrump Valley coach Eli Armendariz said. The Trojans had to defeat Moapa Valley on Friday evening in the loser’s bracket final just to get to Saturday’s game. Sharing a bus with the baseball team, which was in the same situation, meant a late bus trip back to Pahrump to be followed by an early-morning bus trip back to Boulder City for the noon contest Saturday.

“We didn’t really get home until around 12:30, and we still had to shower and take care of our uniforms and stuff,” senior Alyvia Briscoe added. “So yeah, we had a late night.”

Another factor for the Trojans might have been knowing they were in the states regardless of the outcome. The top two teams from Northern Nevada and Southern Nevada qualify for the states.

“I think that relaxed us,” Armendariz said. “We didn’t have that sense of urgency. It seemed like we were a little flat today.”

While flat at the plate, the Trojans were sharp in the field, but their only error proved costly. Jordan Moorhead reached on an infield error and scored when Marleena Mills blasted two-run home run over the fence in straightaway center field for an early Boulder City lead.

Pahrump Valley responded, also taking advantage of a rare mistake. Bennett-Jordan didn’t walk anybody, but she did hit Lauver in the top of the second. Losing pitcher Allyson Rily then ripped a triple to left to score Lauver and cut the lead in half.

Rily didn’t have the best of luck in the circle. The first two runs were unearned, the third Eagle to score reached base on an infield hit and another infield hit played a role in a two-run Eagle fourth during with runs scored on a sacrifice fly and an infield grounder.

Her biggest problem was Mills, who followed up her first-inning home run by depositing another ball over the center-field fence, this time on a ground-rule double that scored Moorhead.

“Ally did really well,” Armendariz said. “I’ve started her a couple of times against teams like Western and Mojave, but today I threw her into the fire and she did very, very well. She was solid; they were just catching up to her there.

“And she’s a freshman, so she’s going to get stronger. I wanted to see how she would do today and how we would back her up.”

But while Rily was solid, Bennett-Jordan was sensational. She set down the Trojans in order during the third, fourth, fifth and sixth innings, until her streak of 14 consecutive batters retired was ended emphatically by Amaya Mendoza, who led off the seventh with a home run. But by then, Boulder City had put the game out of reach on a three-run home run in the bottom of the sixth by Jerra Hinson off reliever Taylor Egan.

“We couldn’t get on base, and when we did we ran out of it,” he said, referring to a failed squeeze attempt in the second inning.

And while the quick turnaround from Friday night to Saturday with two long bus trips provided a ready-made excuse, Briscoe wasn’t having it.

Beating that Moapa Valley team Friday night in Boulder City locked up a return trip to the states for the Trojans, who will begin their quest for the Class 3A championship at 2 p.m. Thursday against Churchill County of Fallon in Reno.