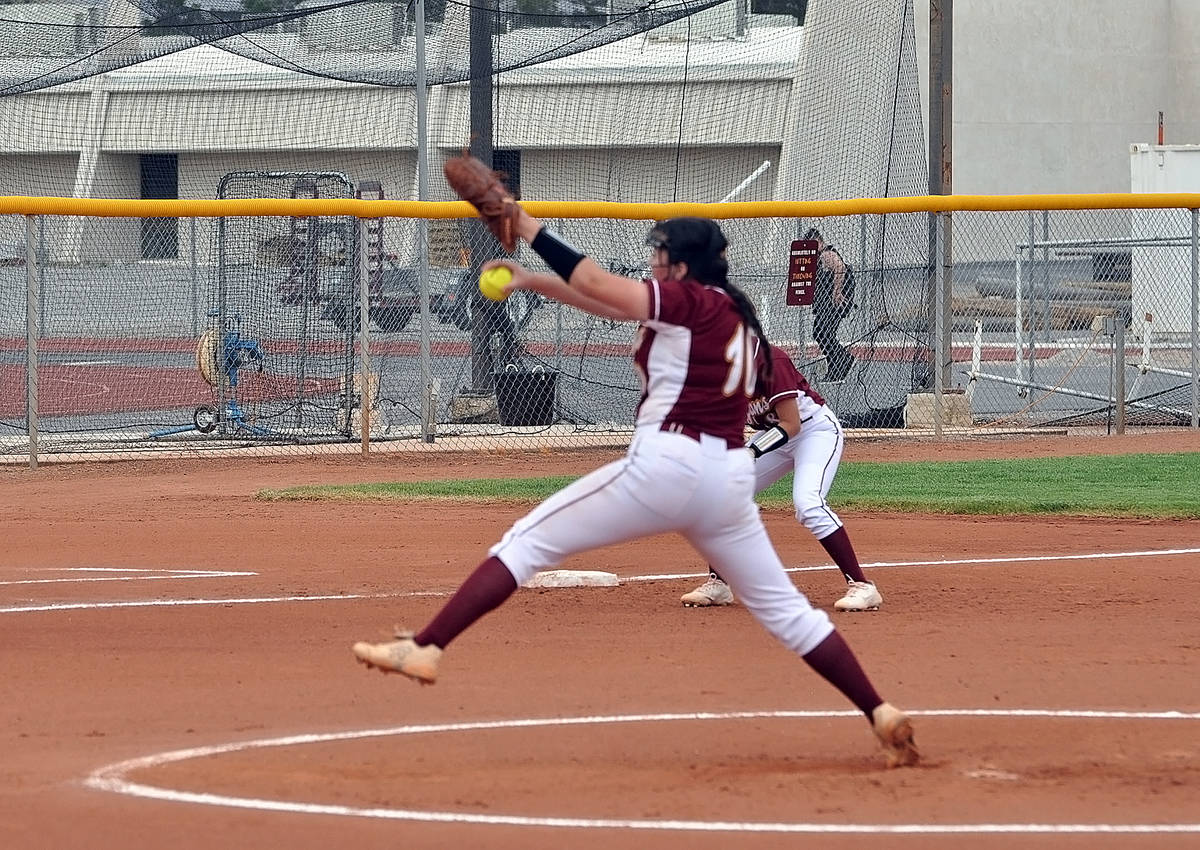 Horace Langford Jr./Pahrump Valley Times Pahrump Valley's Ava Charles winds up against SLAM Nevada on Tuesday at Floyd Field. Charles allowed 4 hits over 4 innings to get the win in the Trojans' 16-3 victory over the Bulls. 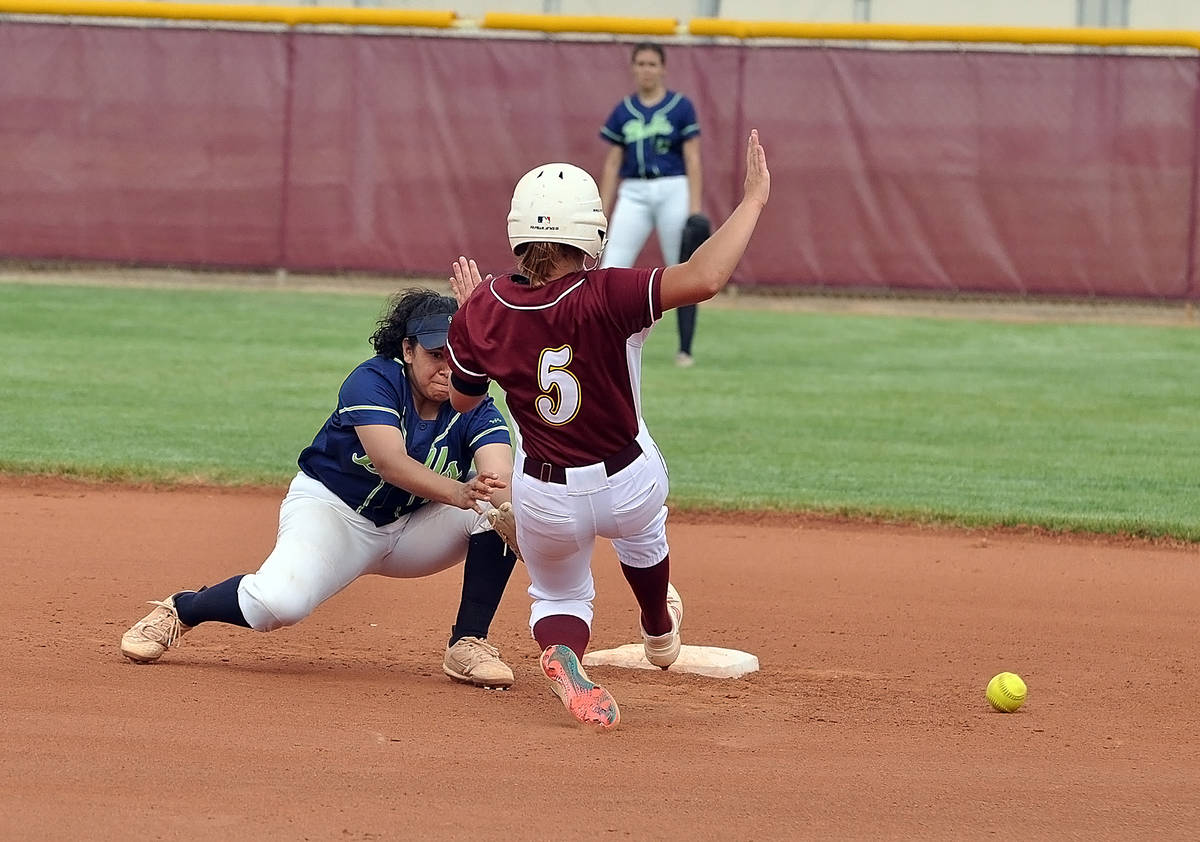 Horace Langford Jr./Pahrump Valley Times Lizzie DeAngelis of Pahrump Valley slides safely into second base Tuesday during the Trojans' 16-3 win over SLAM Nevada at Floyd Field. DeAngelis hit the game-winning single Wednesday as the Trojans rallied for a 19-18 home win over Boulder City.

For more than two hours, Boulder City and Pahrump Valley took turns looking like players who had been introduced to softball — and each other — minutes before the game. Balls were thrown all over the place, balls dropped in between fielders and there was even a four-base error, when a batter bunted and reached first safely on a throw that sailed so deep down the line in right that she was able to circle the bases.

That — and more — was the ugly. The win part was beautiful, at least from the Trojans’ dugout, as the home team erupted for 6 runs in the bottom of the seventh inning capped by an RBI single by Lizzie DeAngelis to post a wild 19-18 win over the Eagles.

After watching errors and misplays fuel much of the offense, Pahrump Valley coach Cassondra Lauver was thrilled to see the bats come alive during the seventh inning.

“Just when we got our last at-bat they started ripping the ball,” she said. “I was so excited for them. We were hitting lasers. They did a good job making adjustments to the pitcher and just hitting the ball.”

The final run scored off of the longest single DeAngelis will ever hit, a bases-loaded blast to right field that scored Leila Denton as the Trojans sent nine batters to the plate without making an out. Highlighting the inning was a booming double to right by Ava Charles and a four-pitch walk to Ally Rily to load the bases for DeAngelis.

“I wanted that game-winning hit so bad, but she pitched me four straight balls so, it is what it is,” said Rily, who felt the situation was getting to Boulder City pitcher Alyssa Bryant. “I think it’s because we hit her back to back to back and she was getting in her own head, and then she started falling apart, to be honest.”

Watching Bryant miss four times in a row to Rily didn’t alter DeAngelis’ approach with the game on the line.

“I was thinking of something to hit,” she said, adding that she had not had a game-winning hit before. “I was very nervous, and I just saw it and hit it. It just happened.”

Dee Dee Egan had injected some life into the Trojans’ hopes two innings earlier. Rily and DeAngelis reached base on back-to-back grounders on which plays could have been made — Bryant threw the ball to second for a force on DeAngelis’ hit but nobody was covering the bag — to set up Egan, who boomed a home run to center field to cut Boulder City’s lead to 17-13.

“It was gigantic,” Lauver said. “A huge boost of energy.”

Also gigantic was Rily coming on in relief after just six batters to restore some order when the Eagles were threatening to run away with it. The first six batters reached base, the first crucial error had been made, Alexis Farrar had belted a 2-run home run and there was nobody out when Rily entered the game with a 3-1 count on Jaiden Van Diest and facing a 4-0 deficit.

“I’ve been in that position a lot where I have to just get thrown in without warming up,” Rily said. “I’ve gotten to the point where I mentally just know that I have to push through it and keep pitching and locating for my teammates.”

A groundout, a single, another groundout and a fly ball contained the damage to 6-0.

But the Eagles put up 8 runs in the fourth to retake the lead in an inning that included two infield singles and a key error that allowed two Eagles to score.

Rily’s own effort said a lot. While she was sharp to get the Trojans out of the first, she labored through much of the game, allowing 15 hits and 5 walks while her defense made 8 errors behind her. But she battled through it, and in a game as crazy as this one that was enough.

“She had no doubt in her mind, her goal was to beat Boulder,” Lauver said. “She is a very strong-willed person, she’s a naturally competitive athlete, and when she gets something in her mind she’s going to stick to her guns about it. It shows her teammates you battle through adversity.”

“The win allows us to erase a bunch, but we absolutely have to reflect and look to see what it is what we need to work on defensively and offensively, but especially defensively,” Lauver said. “We have a lot of things we need to do defensively better. You can’t grow if you don’t reflect.

“You can ride the wave, you can be excited about the win, but you have to go back and get better. This is not the way the win should have happened in my mind.”

Pahrump Valley 16, SLAM Nevada 3: On Tuesday in Pahrump, Charles was 3 for 4 with 2 doubles, 4 RBIs and 3 runs scored and pitched a complete game against the Bulls.

Egan doubled and drove in 2 runs, while Makayla Cadwell also doubled for the Trojans. Egan and Catalena Sandoval each had 2 hits.