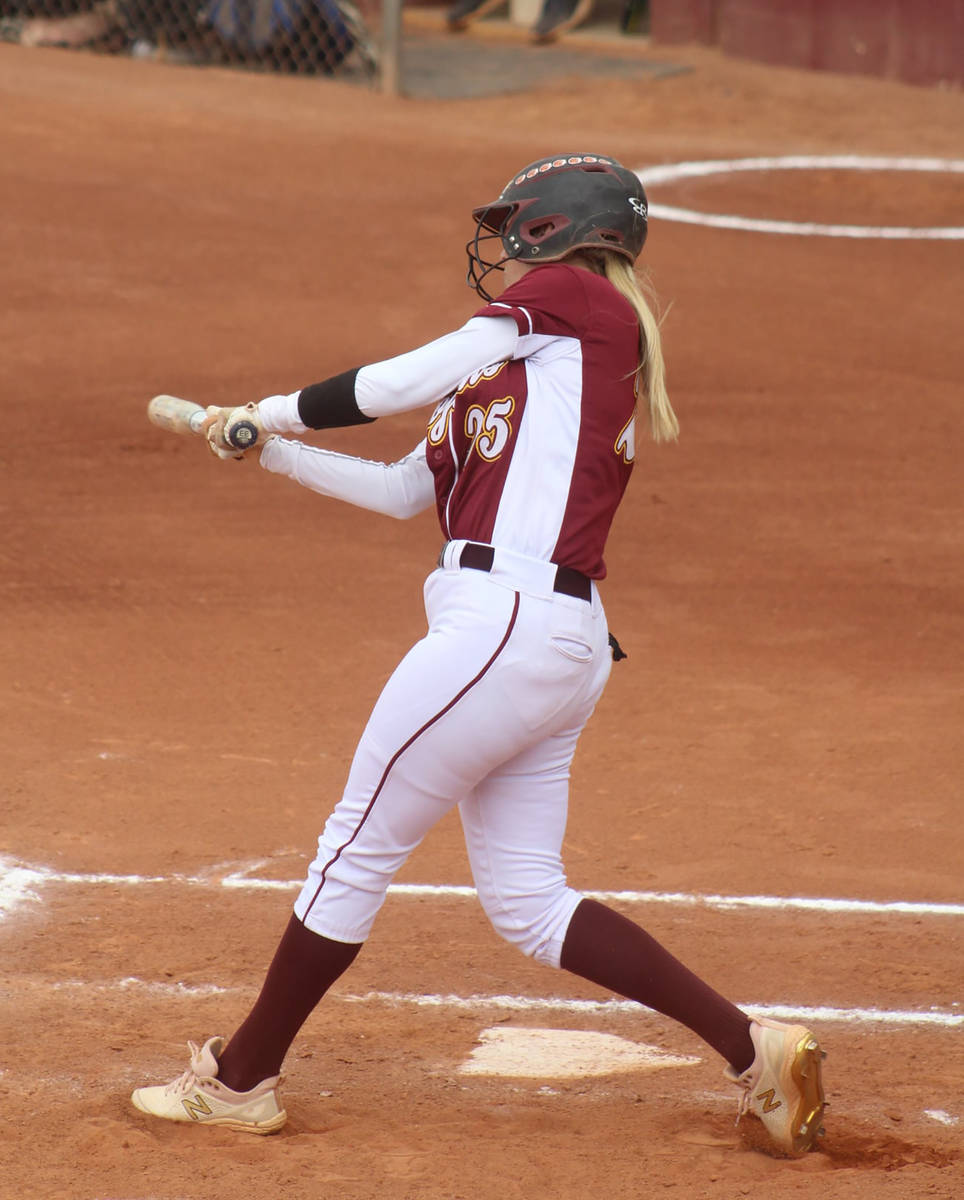 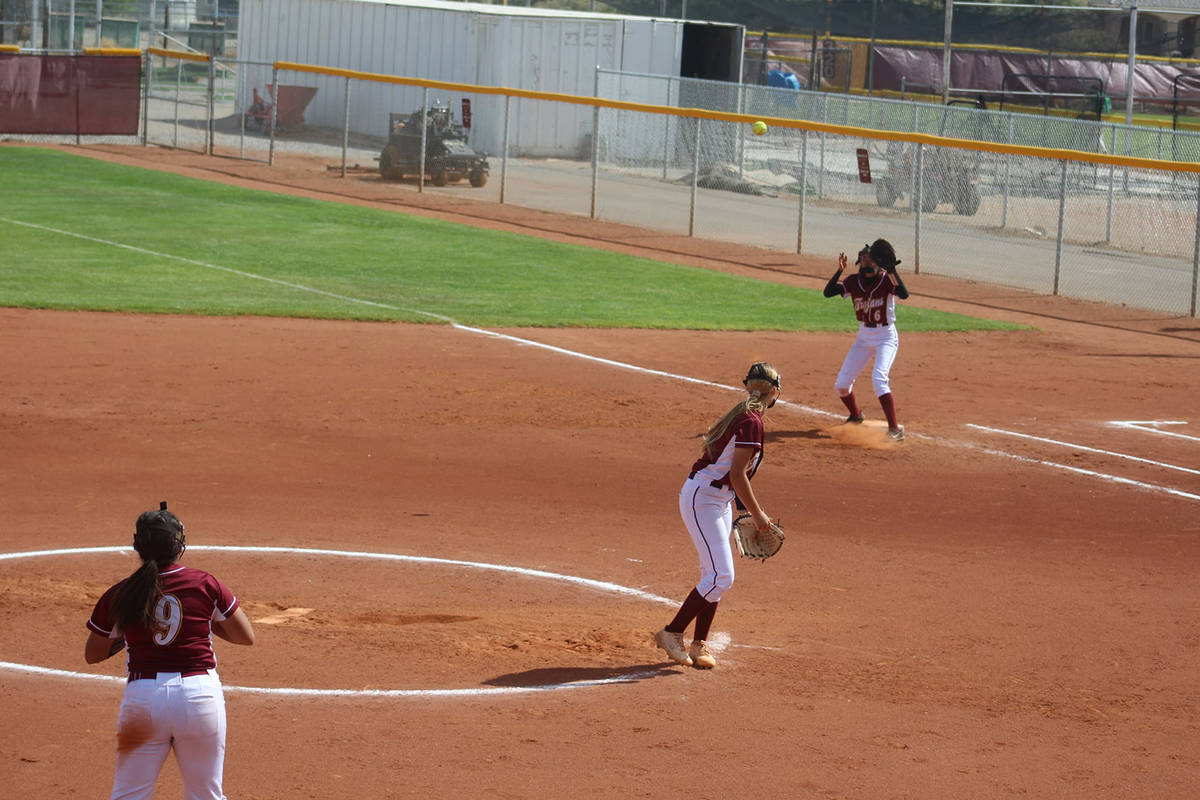 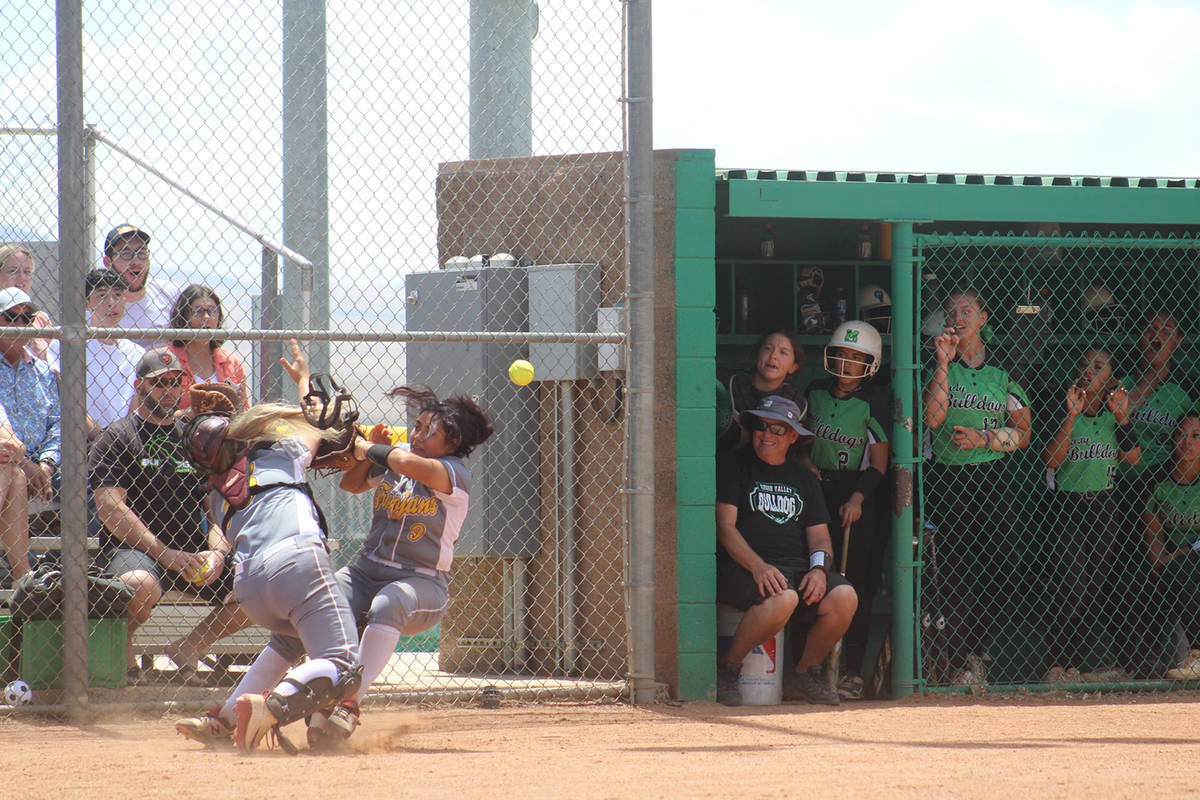 Cassondra Lauver/Special to the Pahrump Valley Times Pahrump Valley catcher Dee Dee Egan, left, and third baseman Haven Nelson collide while trying to catch a foul ball as players in the Virgin Valley dugout look on Saturday during the Class 3A South Region Tournament final in Mesquite. The Bulldogs defeated the Trojans 6-2.

Having already tossed a 1-hit shutout at the Trojans on May 6, Virgin Valley sophomore Riley Price allowed just a single hit again Saturday as the Bulldogs defeated the Trojans 6-2 in the Class 3A South Region Tournament final in Mesquite.

“She had three pitches, a nice rise ball that she was throwing, a curve and a change,” Pahrump Valley coach Cassondra Lauver said. “She’s probably 5-10, 5-11 if not a little taller. She’s just strong.”

Riley again gave up just 1 hit, although the Bulldogs committed 3 errors as the Trojans scored single runs during the first and fourth innings. Conversely, the Trojans were on their game in the field.

“The first time we played them it was an ugly mess, but the second time they came in like, the team you saw the first time was not us,” Lauver said. “We came out and didn’t have any errors in Saturday’s game. The girls came into that game ready to play.”

And it’s not like the Bulldogs were crushing the ball, as they managed only 5 hits off of two Pahrump Valley pitchers.

“Ciara (Stragand) pitched pretty well, then Ally (Rily) came in to finish it,” Lauver said. “That would have been their fourth time to see Ciara, so we needed a change so they would see something different.”

There were a few bright spots for the Trojans, notably Kalea Whitney in center field.

“Kalea had an outstanding game defensively,” Lauver said. “She made seven of our outs and was involved in two double plays. I had F8 all over my scorebook.”

Although Virgin Valley was the top seed in the tournament, there was always the feeling that it would come down to Pahrump Valley and Boulder City. But it didn’t, as the Bulldogs handled the Eagles twice during the region tournament, 3-1 on May 19 and 11-0 on Friday to clinch a spot in the final.

“That’s a legit team,” Lauver said of Virgin Valley. “It’s not just all revolving around one person, but their pitcher for sure is a standout, both pitching and hitting. She’s a big, tall, strong kid, but there are multiple athletes on that team that are pretty legit.”

While the Bulldogs had no problems with the Eagles on Friday, the Trojans had to work a bit more to earn their place in the title game. Playing the same Moapa Valley team they had defeated 7-4 a day earlier, they dug themselves a deep hole early.

“It started off just ugly,” Lauver said. “We made some ugly errors and were not playing our best game.”

After falling behind 7-2 after 2 innings and 9-4 after 6 innings, the Trojans needed a rally to avoid having to play a second, winner-take-all game against the Pirates. And they got it.

“We got down to that seventh inning and just got a rally going,” Lauver said. “The girls got pumped up, the baseball team came over and was cheering us on, and Lizzie (DeAngelis) had a super-sweet line drive to score the winning run. It was a rocket.”

The 10-9 win in 8 innings sent them into Saturday’s final, and while the Trojans did not repeat as region champions — the loss to Virgin Valley snapped a streak of 10 consecutive postseason wins dating to an 8-0 loss to Lowry in the 2018 Class 3A State Tournament — the ever-upbeat Lauver was happy there was a season after losing out in 2020.

“I was so glad that all these kids got to come out and play,” she said. “I know the season wasn’t all they wanted it to be as far as playing for a state championship, but it’s the same across the board, for everybody. They worked hard this season, and they got to have a little bit of a taste of fighting back, clinching a win when they’re down, overcoming adversity.”

As for next year?

“The plan is to keep trucking along,” Lauver said. “The girls have worked super hard, and we’re excited to see where the journey leads.”