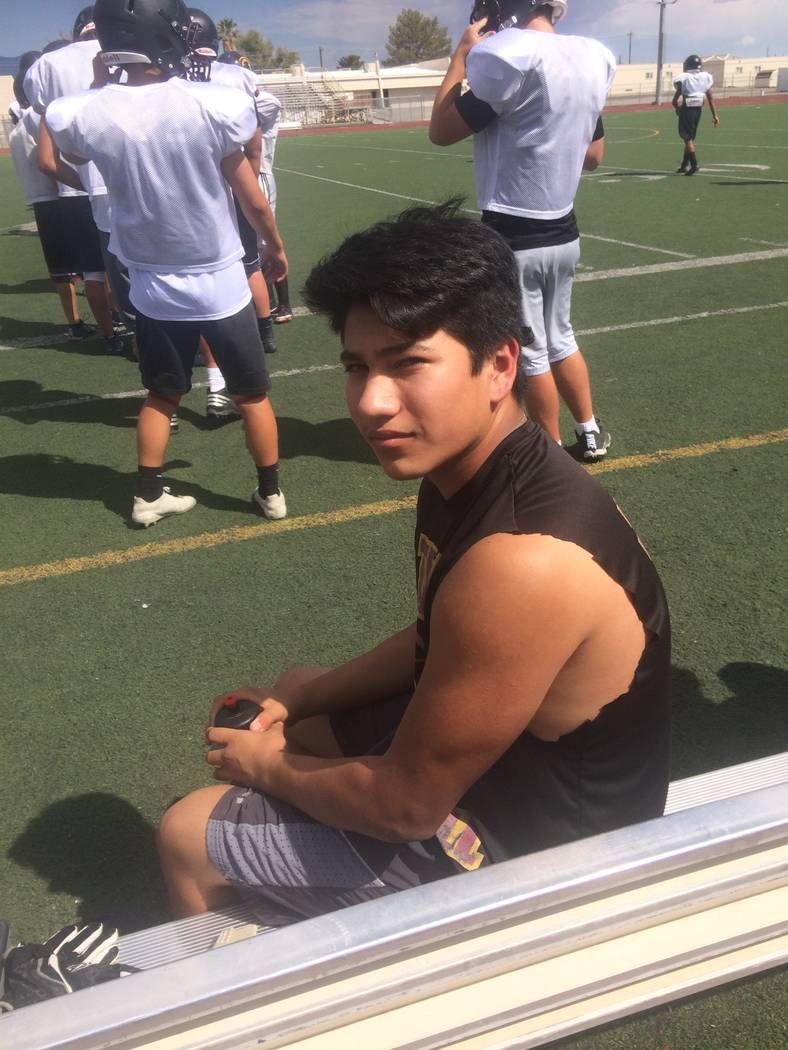 Vern Hee/ Pahrump Valley Times Sophomore linebacker Anthony Peralta heals up from a game-related injury while watching his teammates practice on Monday. He said he should be back on the field for the upcoming game against Chaparral.

He hasn’t scored a touchdown yet, but he had fans cheering him on whenever he got the ball.

Sophomore Anthony Peralta made the Pahrump Valley High School varsity football team this year and made an impression in his last game.

He made the team as a linebacker this year, but in last week’s game when junior running back Nico Velazquez went down with an injury, Peralta stepped in and made some yards as a running back.

“In the first half I didn’t run the ball at all except for returning kicks,” he said. “In the second half I started running the ball and that is when I got hurt.”

Peralta’s love for football goes back to when he was in grade school.

“I have been playing football since I was 6-years-old,” he said. “It’s my favorite sport because I like the adrenalin rush.”

His favorite position is linebacker.

“I like that because you get to hit a lot of people,” Peralta said. “It’s a real physical position.”

He said he was a bit nervous starting his first varsity game.

“It took me a whole quarter before I settled down,” he said.

Being a defensive player requires him to study the offensive line and its movements.

Peralta said he is still learning to read the guards (linemen).

“There was a couple times where I misread the guards in the last game and I read pass and they ran and so they got some extra yards,” he said. “You have to read the blocks and just be physical.”

Peralta said the Pahrump defense didn’t slow down in the second half of last week’s game.

“We have gone through good conditioning,” he said. “We were used to being physical and in the second half we put it together and worked together.”

His main goals for his first varsity year are to keep starting on the varsity team and then he plans on going to college and maybe playing football too.

“I want to play college football and major in something sports-related like, kinesiology, (the mechanics of body movements).”

He acknowledged that his family supports his football.

“My parents are my biggest fans and they have supported me since I was six,” he said.

“My family makes a lot of noise in the stands, but their noise doesn’t bother me, I just try to block it out.”

His mother, Marlina Calleros, is his number one fan.

“My son Anthony is the only sophomore to make varsity after going to the Utah camp, showing where he deserves to be,” she said. “He is a good player, a good kid.”