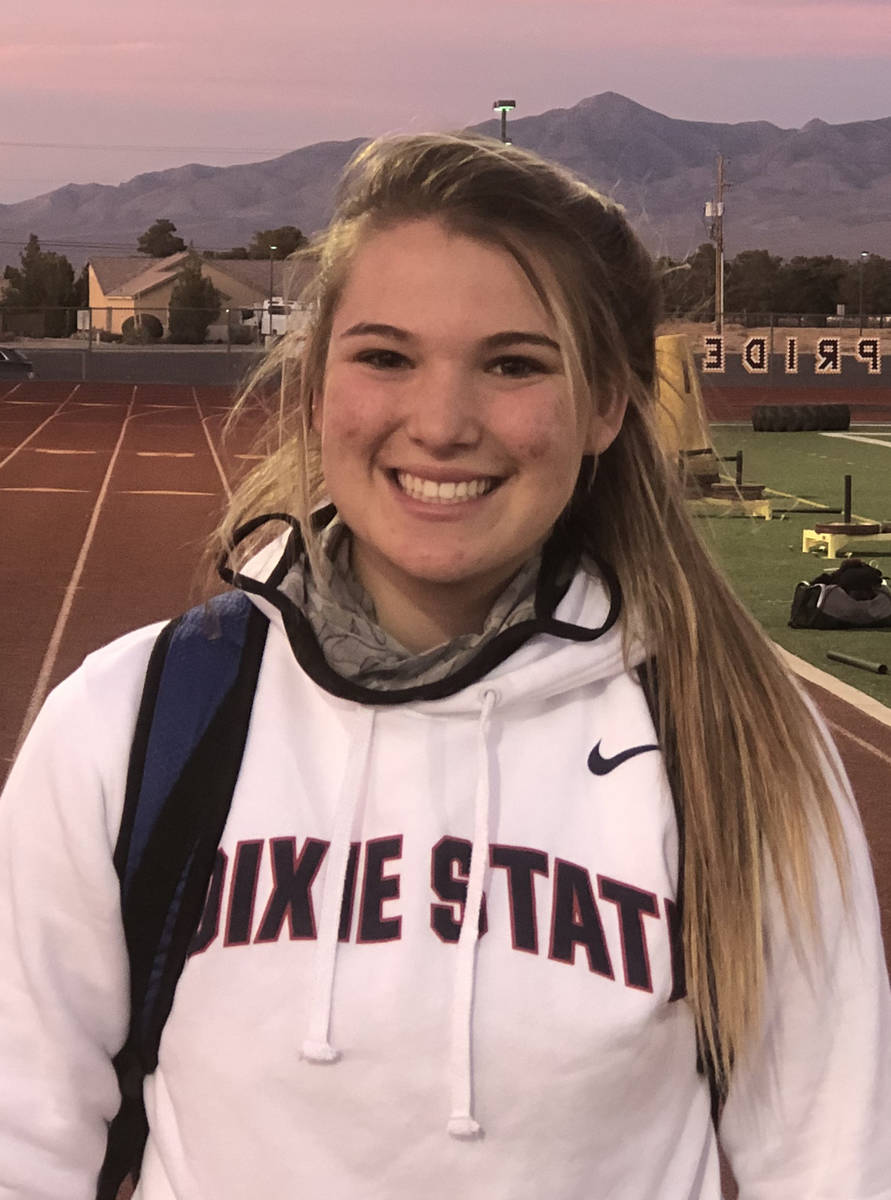 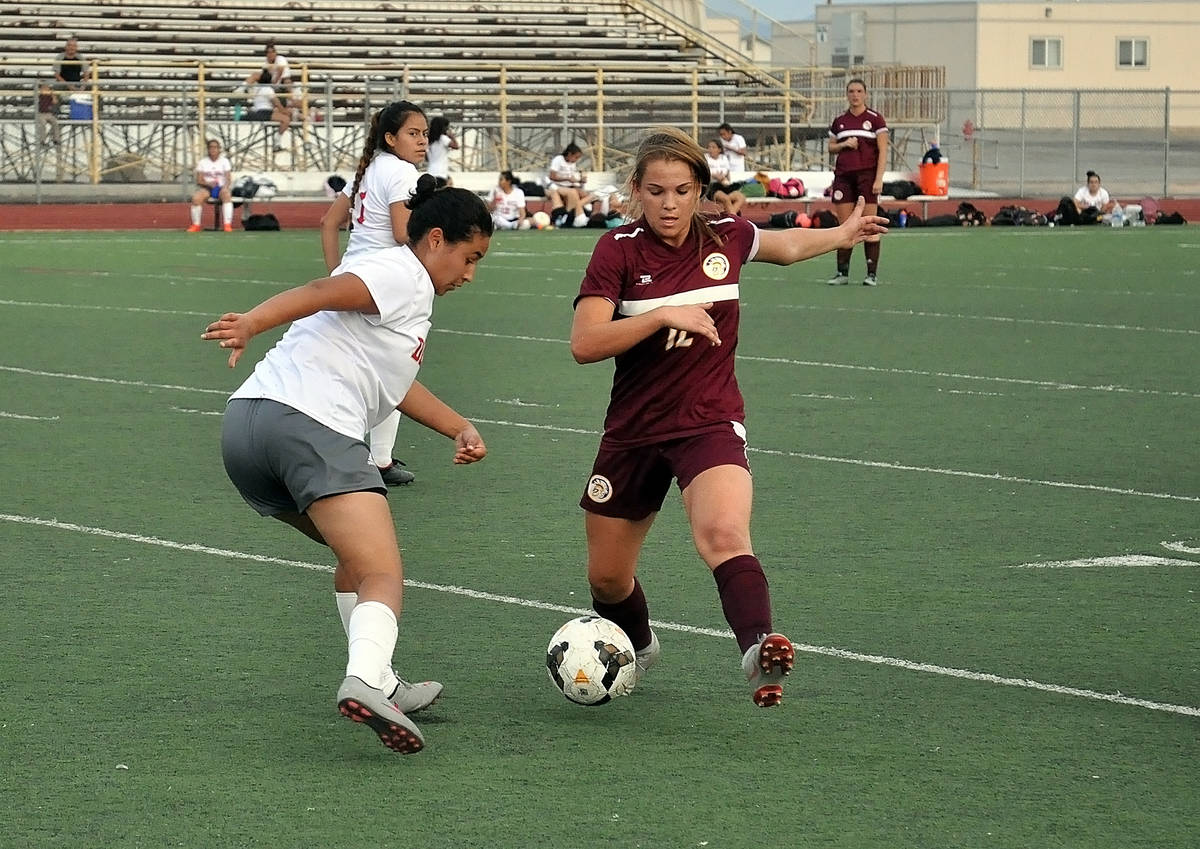 “I’m going to freeze,” said the Pahrump Valley High School senior, who visited the campus in October. “It was snowing. I was wearing shorts; I didn’t expect it.”

The average daily low temperature in January in Casper is 13.5, but it warms up to a balmy average daily high of 34.2. Ironically, Souza is going there because of the heat — the heat from the fires she plans to make a career out of fighting.

“I leaned more toward Casper for the major side of it,” she said. “They have a really good fire science major, and I plan on being a firefighter. I can get all my (certifications), and soccer happened to be a plus that I got offered and could sign and commit there.”

“We happen to have an area of interest of study that not a lot of colleges have,” Bennett said. “We watched some film, had her come down and visit, and in a lot of ways she fit a need. Plus her personality and everything else just felt like this would be a good fit.”

Casper is a brand-new program, adding men’s and women’s soccer last year and not playing what was supposed to be its first season because of the pandemic. That season now will be played this spring, including an April trip to Las Vegas to play College of Southern Nevada.

“We have 30-plus kids on the team, Bennett said. “The group that’s coming in with Maddy will all have been kids we were able to see live. Whatever we are this spring, we will be very different in the fall.”

Bennett said that while the bigger clubs in more populated areas will always have the best players, he has been able to find “real gems in smaller towns.”

“She sent a highlight tape,” he said of Souza. “I saw some movement from her, some thought from her. Everything she was doing on film is what I look for. Overall, I think she’s going to fit in well here. You want hard-working, good kids. What you don’t want is a prima donna.”

It’s not as if Souza never considered playing college soccer. She is a veteran of Las Vegas club soccer, which gave her some time on the field when the high school season was pushed away from the fall, although not as many games as a normal season.

“We were off a bit because of COVID, and we had a two-week break around Christmas,” she said. “We’re pretty good. There haven’t been many tournaments; they’ve all been postponed. We have a tournament coming up in February. I hope it doesn’t get postponed. I don’t think it will be because it’s in Utah, and they’re less strict there.”

If all goes well, Souza’s last high school season will begin with official practice Feb. 20 and six weeks of competition beginning March 5. Souza is ready to add to her already impressive statistical profile.

As a junior, Souza tied Makayla Gent as the Trojans’ second-leading goal scorer, netting 22 for a team that went 17-3-3, 10-0 in the Sunset League. She also tied for third on the team in assists with 11, placing her third in points with 55, behind Gent (63) and Kaylee Mendoza (90). Along with defender Ally Rily, they form a senior core that is very special to Carrington.

“They not only brought the skill, they brought the dedication and the love of the sport,” Carrington said. “If you have kids who love the sport, that rubs off on the other players. They helped get us to state as freshmen, and this was going to be their year.”

Souza also brings her own set of attributes to the field, Carrington said.

That fits with Carrington’s style, which basically involves peppering the opposing net with shots and always — always — following up. But Bennett said Souza also fits with his style.

“She doesn’t quit, keeps going, a lot of hustle,” he said. “For my style, it’s the ‘beautfiul game’ but not a perfect game. What I want is correct thought, and was long as you’re trying to do the right thing and you’re hustling, good things will happen.

“You really want versatile players that really understand the game.”

While Wyoming might not be the first place anyone thinks of for soccer — or college, for that matter — Souza had voices in her ears.

“One of the teachers here, Mr. (Taylor) Herron, he and his wife are alumni from there,” she explained. “They talked about it, and I went on a visit there and Mr. Herron’s dad is actually a fire captain up there. It all fell into place, so it was really nice.”

To make the connection run full circle, Souza already has spent some time around firefighters.

“I volunteer at the fire station right now, and that’s super awesome,” she said. “I love it there; they’re great people. Chief, he’s amazing. He’s always working with me because he knows I’m busy with two soccer teams and a basketball team.”

But that’s not enough, and Souza plans to spend her last summer before college fighting fires.

“It could be California, it could be Arizona, it all depends,” she said. “It depends on wherever they send you. But that’s my plan after graduation, go straight into that and then I’ll go to Wyoming.”

When she gets there, she will start a two-year program “designed to provide students with the knowledge and skills necessary for fire service employment or job advancement within the profession, or for transfer to a four-year school for additional training in fire science management,” according to the Casper College website.