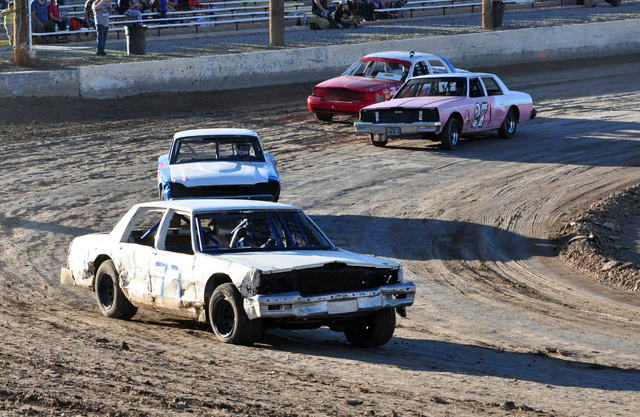 The Pahrump Valley Speedway raced last Saturday despite the threat of rain. The car count seemed to be unaffected by the threat with 44 cars showing up for the contest. This count didn’t include the nine young Mini Dwarf racers who showed up.

The Modified race was one of the least exciting of the races because of the low car count. Three racers showed up in this class with only one finishing the race, Daryn Waldo.

According to Dale Geissler, the most exciting race of the evening was the Super Stock race.

“In this race, there was a lot of back and forth between the leaders,” he said. “It was a good battle.”

Geissler said another good race was the Dwarf cars. He said there was one car just pushing Cecilia Dillie’s car like he was in NASCAR. That car was driven by Ronnie Williams.

“Williams was right up on her bumper pushing her down the front stretch sometime towards the end but not on the last lap,” Geissler said. “This guy was making it through the pack and just did a NASCAR move on Dillie to take the lead and win it. These little cars really tear around the track.”

He said prior to Williams passing Dillie it looked like Williams was touching Dillie’s bumper on the straightaway as the two passed the stands.

The rains have made things slick at the track. Geissler said drivers were well aware of the wet conditions.

“The drivers knew if they pushed too hard coming around the turn and if they went too fast that they could slide up and hit the outside car,” he said.

In the Coupes, Mark Daub finished in first, Anthony Broadhead in second and Allen Lokey finished in third.

In the Mini Stocks, Dylin Smotherman was first, Robert Smotherman was second and Jabez Broadhead was third. Anthony Martin was the lone finisher for Mod Mini.