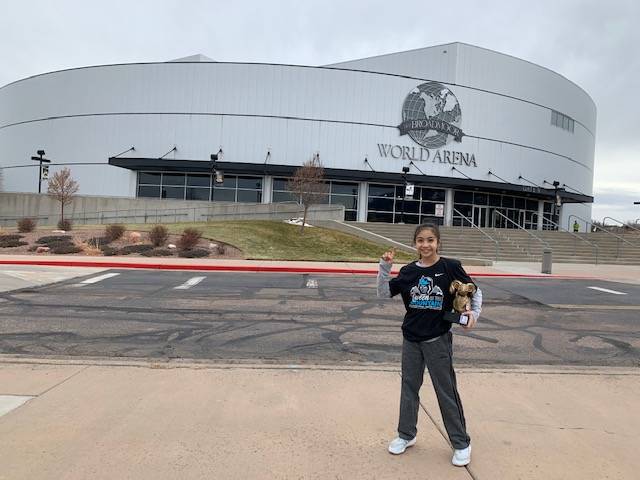 Special to the Pahrump Valley Times Pahrump's Mika Yoffee outside the Broadmoor World Arena in Colorado Springs, Colorado, where she won the 12U girls 73-77-pound division at the Queen of the Mountain wrestling tournament. 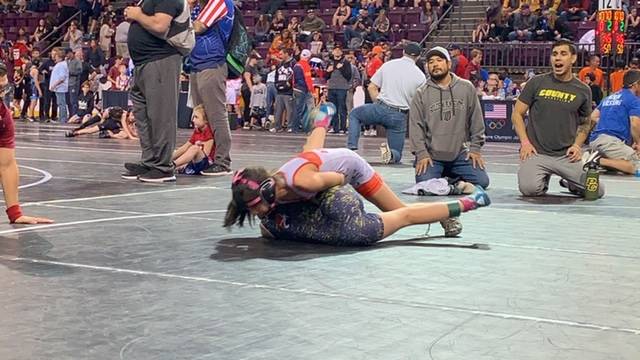 Special to the Pahrump Valley Times Mika Yoffee of Pahrump takes control of a bout during the girls 12U 73-77-pound division class at the Queen of the Mountain wrestling tournament last weekend in Colorado Springs, Colorado. 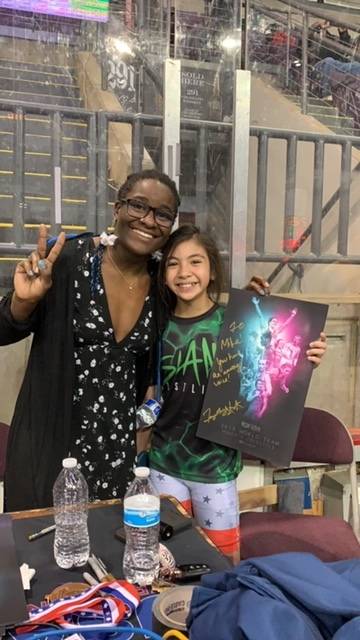 Special to the Pahrump Valley Times Mika Yoffee of Pahrump with Tamyra Mensah-Stock, who in September became the third American woman to win a world wrestling title when she captured the 68-kilogram division in Nur-Sultan, Kazakhstan.

Mika Yoffee of Pahrump pinned two opponents and won by major decision over a third to win the girls 12U 73-77 weight class at the King of the Mountain wrestling tournament Dec. 8 at Broadmoor World Arena in Colorado Springs, Colorado.

Yoffee, who competes for the Slam Wrestling Club in Las Vegas, opened by recording a fall over Maylee Yancey of the Cowboy Mat Club in 3 minutes, 54 seconds. Yancey went on to win her other two matches to finish second in the division.

In the second round, Yoffee dominated Level Up Wrestling’s Eva Corey 14-0, before clinching the title with a 58-second pin of Samantha Gregory of Arizona Girls Wrestling Club.

Yoffee, who was awarded what mom Marianne called a “really cool” trophy in the shape of a bighorn sheep, also got to meet some of the standouts in her sport, including 2019 world champion Tamyra Mensah-Stock and 2016 Olympic gold medalist Helen Maroulis.

Yoffee’s sister, Suri, was ill and could not compete in the event.

With $400 in added prize money and raffle prizes to be won, the Christmas Tree Open singles horseshoes tournament will be held Saturday at Petrack Park.

All players are welcome to take part simply by showing up at the Petrack Park horseshoe pits and signing up by 11 a.m. Trophies will be awarded in three classes, provided by Dennis Andersen, who, along with Mike Nicosia, kicked in much of the added prize money.

The entry fee is $15 per person, and the tournament will feature a round-robin format, ensuring all pitchers will have plenty of games. For more information, contact Lathan Dilger at 435-691-3857 or Mike Norton at 805-570-2368.

“I’m delighted to recognize Nevada’s own Greg LeMond for his service to this country,” Cortez Masto said. “Greg is a towering figure in American sport and an icon to all who watched him wear the yellow jersey in the Tour de France.”

Although LeMond was born in California, he grew up near Reno and attended the city’s Earl Wooster High School. At 18, he became the youngest cyclist selected for the United States men’s Olympic team. His first Tour de France, in 1984, resulted in a third-place finish, and two years later he defeated the field by more than 3 minutes, becoming the first non-European to win cycling’s most prestigious race.

LeMond, a two-time winner of the Road Race World Championship (1983, 1989) who was inducted into the United States Cycling Hall of Fame in 1996, is a strong anti-doping advocate who clashed with American cyclists Lance Armstrong and Floyd Landis, each of whom eventually received bans by the United States Anti-Doping Agency after first attacking LeMond for his statements.

After suffering a broken wrist and collarbone and getting 40 shotgun pellets removed from his abdomen after a turkey hunting accident, LeMond returned to cycling and won the Tour de France in 1989 — by 8 seconds in the closest finish in race history — and in 1990, becoming one of only seven riders to win at least three times.

“Since retiring from cycling, Greg has contributed his time and effort to so many important causes, from childhood sports to victims of sexual assault to those suffering from childhood illnesses,” Cortez Masto said. “He exemplifies both Nevadans’ independence and their devotion to community.”

The bill to award LeMond a Congressional Gold Medal passed the House of Representatives on Sept. 19 and awaits action by the Senate.