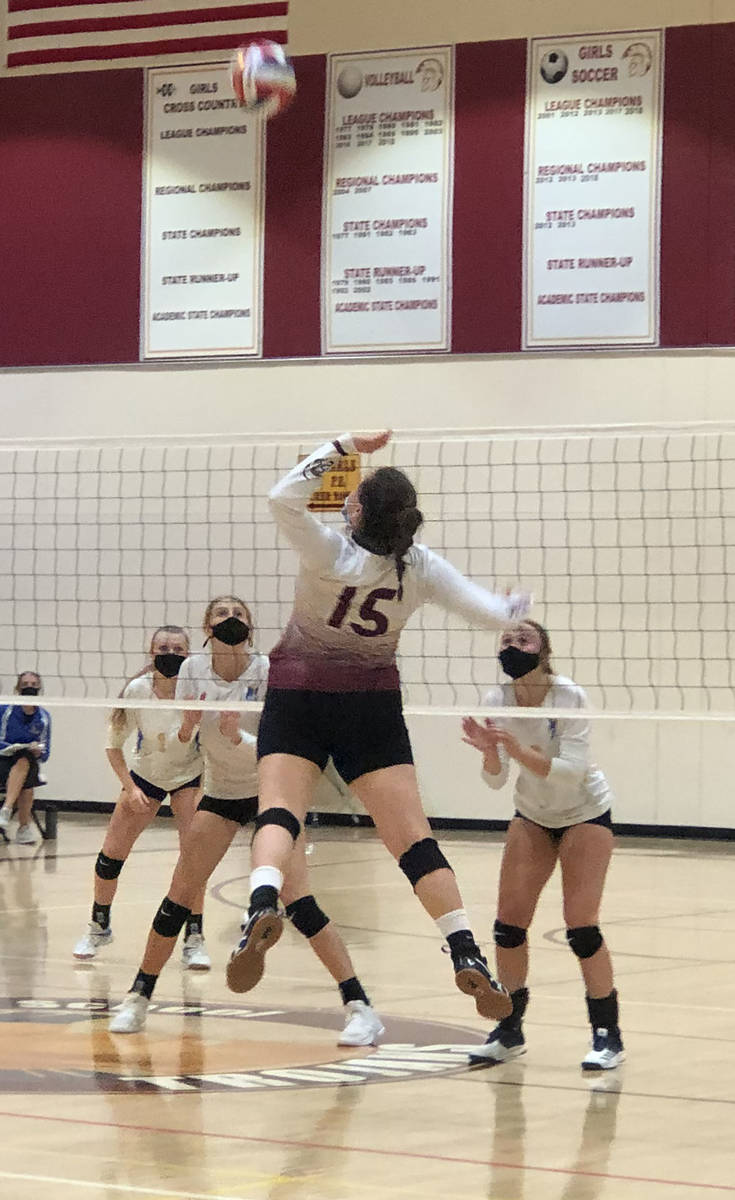 Tom Rysinski/Pahrump Valley Times Pahrump Valley High School senior Kate Daffer goes up for a kill attempt during Tuesday's match again Moapa Valley in Pahrump. The Trojans will close out the season at 6 p.m. today against Virgin Valley in Mesquite.

CCSD Superintendent Jesus Jara made the announcement during a news conference at Sierra Vista High School. Attendance will be capped at 250 spectators or 50% of a venue’s capacity during the spring sports season.

The original plan, which was announced in February when the district unveiled its plan to return students to in-person learning, called for no fans to be allowed to attend.

“We will allow (spectators) using the occupancy restrictions, social distancing, wearing face masks, and this is a step moving forward,” Jara said.

“We didn’t set a preset number because every facility is different,” she said. “I’ll use baseball as an example. If you look at Sierra Vista’s baseball field, it’s enclosed, it’s small. But if you look at Foothill High School, that’s an open facility. You could have a lot more attend there than you can here.”

While Pahrump Valley’s girls soccer team was wrapping up its season with an 8-0 loss to Faith Lutheran at home Tuesday, the Trojans boys soccer team was doing exactly the same thing against the Crusaders in Las Vegas.

Senior Angel Mange recorded a hat trick with 2 assists as Faith Lutheran finished the season 6-1-1, going 6-0 against opponents other than Bishop Gorman. Ari Espinosa-Sirvent added 2 goals and 2 assists for the Crusaders, who also defeated the Trojans 5-0 on March 16 in Pahrump.

The Trojans (2-6) will wrap up the season at 5 p.m. today against Virgin Valley in Mesquite.

Varlack, who has consistently been the Trojans’ No. 1 runner this season, covered the 5,000-meter course in 18 minutes, 3.2 seconds, well behind senior Ethan Woods of Virgin Valley, who won the race in 16:52.4, and Sotelo, who finished in 18:48.4. Freshman Nathaniel Roundy finished seventh for the Trojans in 19:09.8.

In the girls race, junior Makani Araujo finished fourth in a time of 24:00.7 for the Trojans, with classmate Kaydance Hagerstrand taking fifth in 25:04.9.

Junior Beverly Roundy also placed in the top 10 for Pahrump Valley, covering the course in 26:57.3 to finish ninth.

Pahrump Valley will wrap up its season Saturday at a meet being billed as the Southern Regional Cross Country Championships. The boys will run at 9 a.m. with the girls at 9:50 a.m. at Hidden Valley Ranch in Logandale.