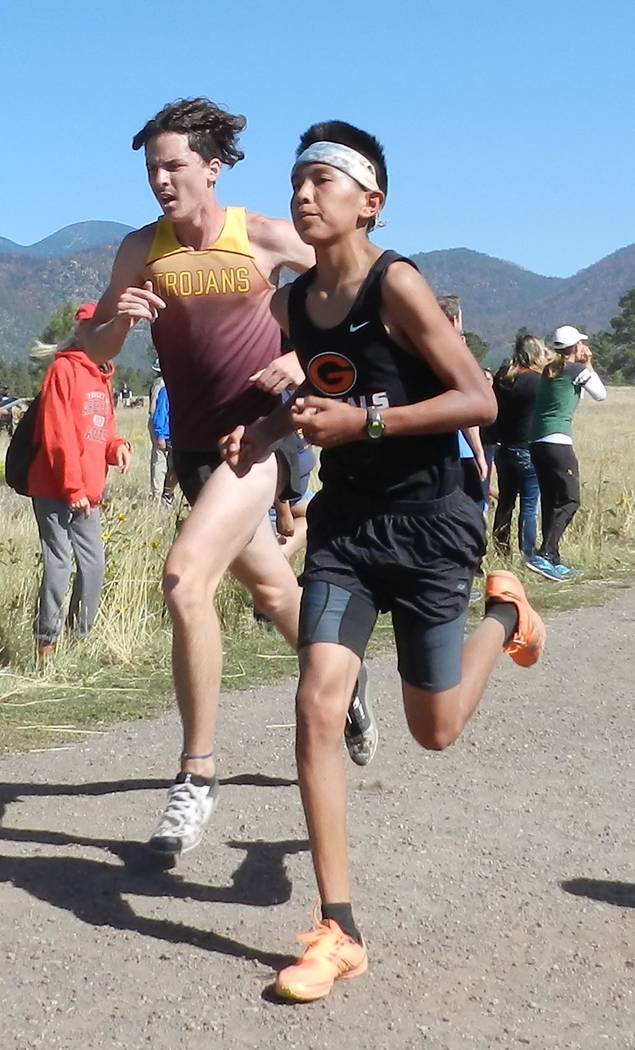 Tammi Odegard/Special to the Pahrump Valley Times Pahrump Valley senior Brandon Ruud, left, runs in the Four Corners Invitational on Sept. 21 in Flagstaff, Arizona. Ruud was the top Trojan on Saturday at the Falcon Invitational in Henderson, placing 29th in 18 minutes, 18 seconds. 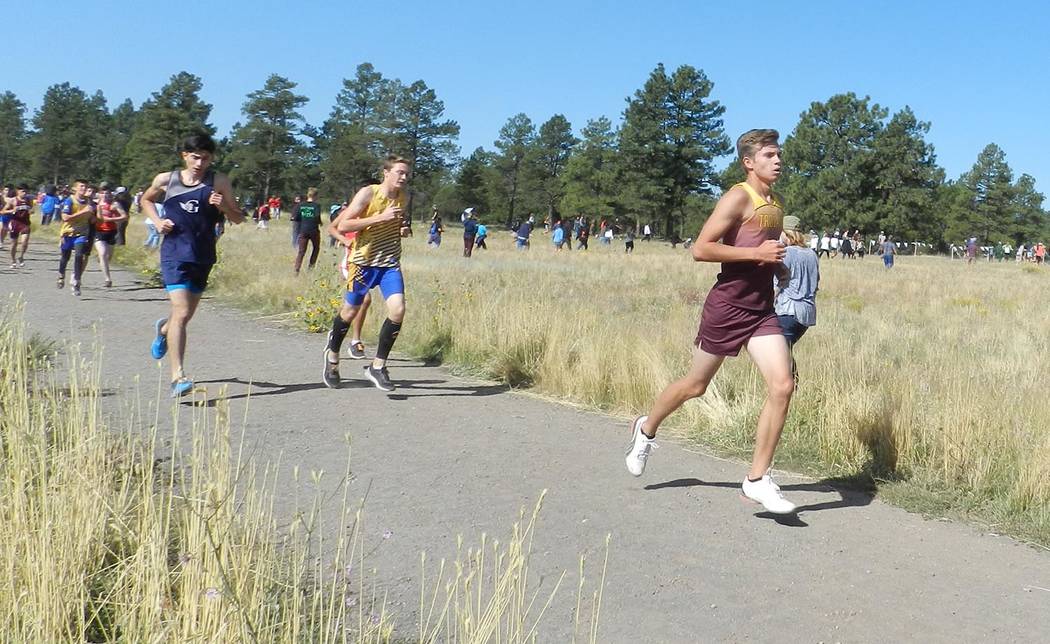 Tammi Odegard/Special to the Pahrump Valley Times Senior Andrew Hope runs for Pahrump Valley in the Four Corners Invitational on Sept. 21 in Flagstaff, Arizona, where he finished 5,000 meters in 21 minutes, 17.8 seconds in a tight pack with teammates Edson Roundy, Vincent Martinez and Ulises Sotelo.

Three other Sharks finished among the top 32 in the 81-runner field, with seventh-grader Ryleigh Denton placing 23rd in 17:11 followed by classmates Khylarann Park (26th, 17:19) and Jordan Onigkeit (32nd, 18:08). Rosemary Clarke totaled 103 team points, well behind first-place Bob Miller’s 24, 29 behind Cadwallader and 22 points ahead of fourth-place Leavitt.

In the boys race, seventh-grader Caleb Sierra-Hudgens finished in eighth place in a time of 13:49 to lead the Sharks to fifth place in a 10-team field.

Junior Breanne Nygaard’s 10-over 82 paced the Pahrump Valley High School golf team to another first-place finish in a Sunset League match, this time Sept. 24 at Legacy Golf Club in Henderson.

The Trojans easily have won the team title at each league match this year. This time around the margin was 61 shots over Western, even though the Trojans shot their worst score in relation to par, 158 over, of the season.

Nygaard finished second to rival Carolyn Lemon of Western, who carded a 79 to top Nygaard for the first time this season. Nygaard previously had been the medalist Aug. 29 at Aliante Golf Club and Sept. 18 at Las Vegas Golf Club, while the two tied Sept. 4 at Las Vegas National.

Four Trojans finished in the top six at Legacy, with Shania Hopkins fourth at 118, Toni Cross-Smith fifth at 120 and Alyssa Holmes sixth at 126.

Pahrump Valley will host the fifth Sunset League match of the year, as golfers from Western, Mojave, Del Sol and Valley will join the Trojans today at Mountain Falls.

Also running for the Hornets was junior Alfonso Sandoval, whose time of 20:26 was good for 101st in the field of 187.

As for the junior/senior race, Shanniah Tripp was the only Pahrump Valley runner, and her time of 30:07 was good for 92nd place.

The Pahrump Valley High School girls volleyball team had a very busy weekend but also a very successful one, winning seven of nine matches at the Boulder City Invitational.

All but two of the matches were done in straight sets, including victories over Liberty Baptist, Valley (twice), Spring Valley and Del Sol and losses to Silverado and Tech. The other matches were 2-1 wins over Virgin Valley and Lincoln County.