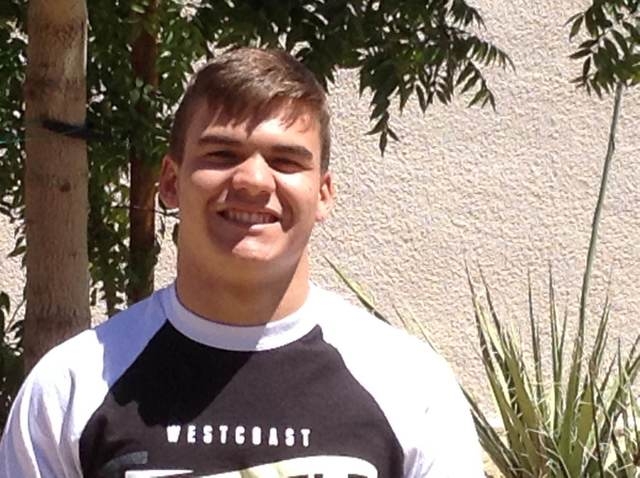 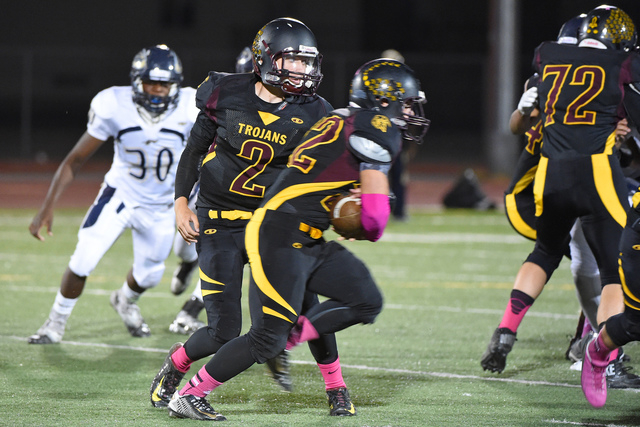 Junior Tommy Gascoigne Jr., a student athlete at Pahrump Valley High School, will have a busy summer this year and will be attending the West Point Summer Leaders seminar in June, followed by the U. S. Naval Academy Summer Seminar.

His goal is to eventually make it to West Point.

“I have been wanting to serve my country since I was 8 years old,” he said. “My father was an explosive ordinance disposal soldier with the 10th Mountain Division. He was my role model.”

Gascoigne led the Trojans in rushing with 119 carries for 506-yards rushing. He also lettered in wrestling. In addition to his sports, he has a 4.0 grade point average and is taking honors and advanced placement classes along with doing work in the community.

One of Gascoigne’s community projects was getting a grant for the VFW post 10054 food bank.

“Duty honor country those words I want to try to live by,” Gascoigne said. “I try to do this now by honoring the vets. I got a $2,500 grant from the Walmart Foundation for VFW post 10054. I have always wanted to serve my country and right now I am doing it in a small way by supporting my community and veterans.”

Gascoigne comes from a military family. His father is now out of the service but works at the Nevada test site as a safety officer. His older sister is going to the University of Nevada Las Vegas and is also an E-3 in the Nevada National Guard, driving trucks.

The young West Point prospect said he feels he owes the government and wants to pay them back.

“I feel I owe my country for what they did for me,” he said. “My father had a vasectomy and I was born because the Army gave my dad a free $20,000 operation to reattach his tubes so that I could be born. I want to serve my country the most effective way possible and I believe West Point will teach me the best way possible.”

He is currently going through the high school Junior Reserve Officers Training Program and his commanding officer is Lieutenant Colonel Patrick Nary. Nary says he believes Gascoigne has what it takes to make it in a military academy.

“Tommy is carrying a full load, participating in the community, doing sports and keeping up the grades,” Nary said. “He has the potential and the qualities that West Point wants.”

Nary said that being from Pahrump will not influence the application board at the military academy. He said what Gascoigne needs is the proper support from his congressional representatives and he thinks he does have that.

“Getting the right support network to get in is what is necessary,” the Colonel said. “Tommy met with Senator Pat Spearman from the Nevada State Assembly and she is aformer military police officer and showed some interest in Tommy at a JROTC function.”

Nary said Spearman is on the Congressional District Selection Committee for Military Academies.

Craig Rieger, Gascoigne’s wrestling coach and football coach, agrees with Nary that Gascoigne has what it takes.

“He is a great, hard-working student,” Rieger said. “He has big goals for the military. Tommy did a good job running the ball last year at fullback. I hope he is ready for his senior year. It would be great to have Tommy lead us in football and possibly he will come back to wrestling.”

Joe Clayton, his head football coach had nothing but praise for his running back.

“I have coached Tommy since he was a boy,” Clayton said. “He is dedicated to achieving success. He is a hard-working, hard-nosed fullback, very coachable, well liked by everyone. He had a great year for us last year as a junior. He was our Offensive a Player of the Year! I will miss him.”

Gascoigne said he has several other role models besides his father. He admires Robert E. Lee for his ability to get out of tough situations.

“He had no demerits at West Point and he won countless battles during the Civil War being outnumbered 3-1,” Gascoigne said.

In addition, he also admires Marshawn Lynch from the Seattle Seahawks and Frank Gore of the Indianapolis Colts.

“I like the cuts that Lynch makes and the way he knees people in the face when he runs and Gore is just a stud,” he said.

Gascoigne belives in surrounding his environment with constant reminders of his goals and things he needs to do.

“On my wall I have a West Point banner above my bed, I have a calender of things I need to do posted on the wall and I have next to my bed a copy of “Don’t Live Ordinary,” he said.

He added, “What I do at home, is very college preparatory, I am constantly studying for ACTs and SATs and keeping my grades up and I work out at 4 a.m. every morning.”

He plans on having his West Point package completed by November.