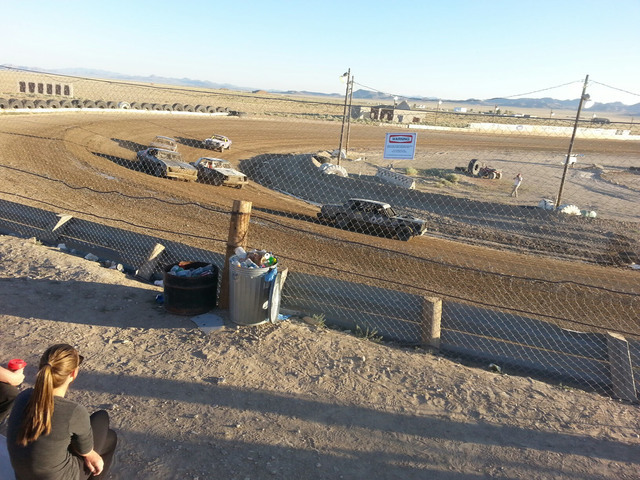 The bomber/hobbystock race during the recent Ironman Challenge. As the summer unfolds, the Tonopah Speedway is gearing up for several more weeks of racing action, featuring local competitors in addition to those from out of state. The speedway recently played host to the Ironman Challenge, serving as home to the event's opening races in Nevada. Lee Ketten/Special to the Pahrump Valley Times

TONOPAH  As the summer unfolds, the Tonopah Speedway is gearing up for several more weeks of racing action, featuring local competitors in addition to those from out of state.

On a typical night, we usually have about 35 to 40 cars, said Lee Ketten, speedway president. On big nights, we probably have 60 all total.

The speedway, off U.S. Highway 6 about eight miles north of Main Street, dates back to 1982.

Its been a big part of lot of people in the community over the years, Ketten said. Racing is a community event, as well as family and friends. Its a place for the community to gather together and with a common interest.

The speedway recently played host to the Ironman Challenge, serving as home to the events opening races in Nevada.

That was a 10-day event, Ketten said. The whole state of Nevada. Five different tracks. That was our big event.

More events are planned in the Saturdays ahead, with racing planned for July 30, Aug. 5-6 and Aug. 20.

Besides the recent Ironman Challenge, the Aug. 5-6 competition is considered a another BIG race, Ketten said via email.

The Jim Marsh Classic, as we call it. We expect a large turnout for this event and doubt anyone will not be entertained by the competition.

For spectators, general admission to the Tonopah Speedway is $10. The price is $5 for children, senior citizens and military members. Gates open at 6 p.m. with racing starting at 7 p.m.

We have a lot of seating area, bleachers, Ketten said in an interview. We also have concessions, which is hamburgers, hot dogs, nachos, chili, that kind of thing, beer and soda, candy.

The speedway features a kiddie corner for youngsters, including candy and toys. Hats and T-shirts are among the items that can be bought there.

Racing usually concludes by about 10:30 p.m.

Ketten describes the atmosphere at Tonopah Speedway as family-oriented on multiple levels. A lot of the racers out there are third-generation. Their grandfathers raced. Their fathers, and now the grandsons are racing too.

In addition to race cars, the track often features go-kart racing, except during big events such as the Marsh Classic. The go-kart racing allows youngsters to get a feel for the speedway.

That also broadens the age range of those taking part. We have racers from 6 to their 60s, Ketten said. We have grandchildren all the way up to grandpas out here running.

Racing occurs on a quarter-mile dirt track. Depending on the type of car and racing classification, they motor along at 45 mph to more than 70 mph.

The racers in Tonopah come from a diverse geographic region. On a normal night, probably about 70 percent of them are local, Ketten said. Thirty percent come from either southern or northern Nevada, and we get some from California, Oregon, Utah and Arizona.

Ketten, a life-long Tonopah resident, is a racer himself. Hes been racing at the Tonopah Speedway since 1985.

It is pretty exciting, he said. It gives you a lot of self-confidence. Its fun to be out there with your family and friends to be able to show your talents.

Theres also the camaraderie among racers. Its almost all friends out there, Ketten said. Even though were close competitors on the track, off the track we will do anything to help each other out. We pretty much all do it, and were thankful to God for it.

The speedway is overseen by a nonprofit through the Central Nevada Racing Association with the grounds leased from Nye County.

Were all volunteers, everybody out there is a volunteer, Ketten said. Any community support we can get is greatly appreciated. Were always appreciative to our fans, old fans, as well as hopefully some new ones, he added. We thank the community for all the years of support.