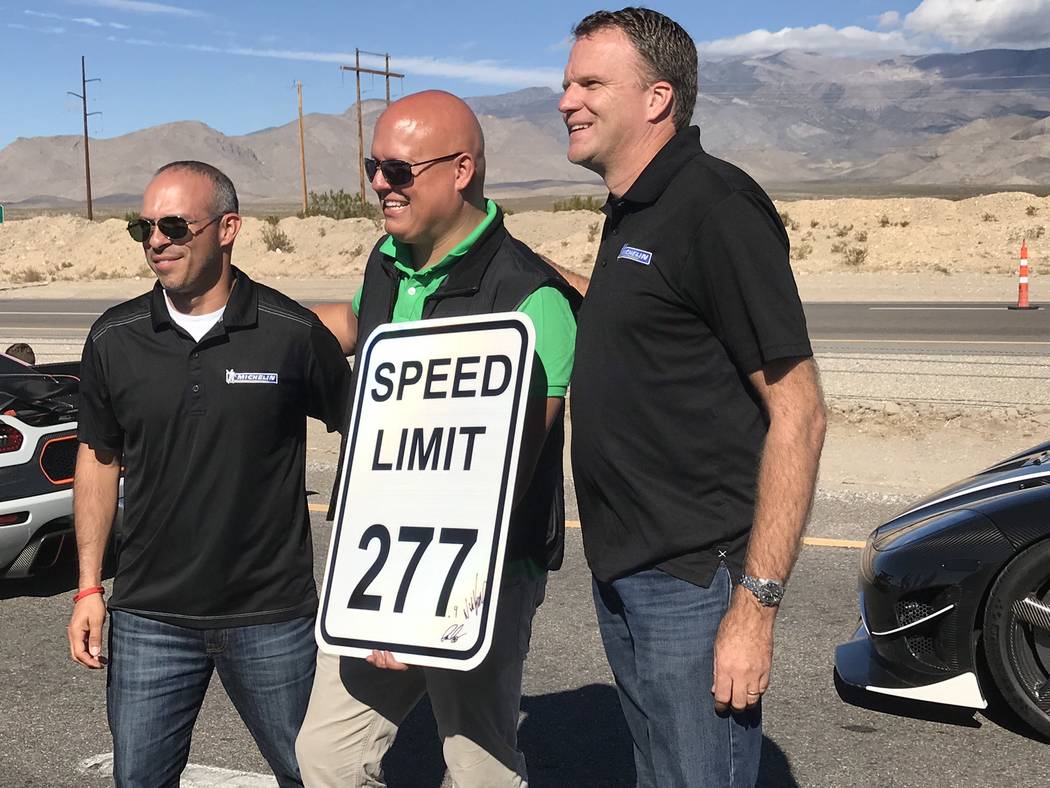 Jeffrey Meehan/Pahrump Valley Times Christian von Koenigsegg (center), CEO and founder of Koenigsegg, a Swedish car maker, stands with two unidentified Michelin representatives at his company's record-breaking day on Nov. 4 on Highway 160, near the Tecopa turnoff. Koenigsegg's Agera RS model toppled speed records for a production car at an average speed of 277.9 mph. The record was the average of a downhill and uphill ride on an 11-mile stretch along the highway. 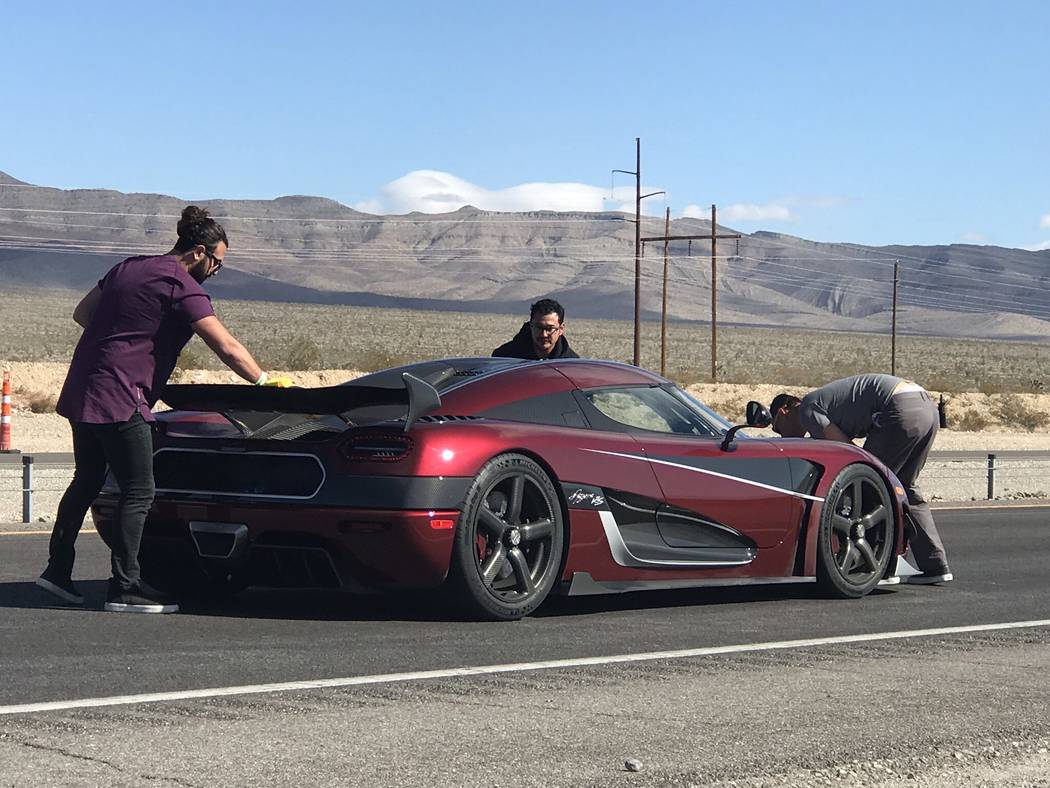 Jeffrey Meehan/Pahrump Valley Times The record-breaking Koenigsegg Agera RS is readied for another run along an 11-mile stretch on Highway 160 on Nov. 4, between the Tecopa turnoff and Spring Mountain. The high-performance vehicle shattered several speed records including the fastest speed for a production car at 277.9 mph. The speed was an average of an uphill and downhill run on the highway. 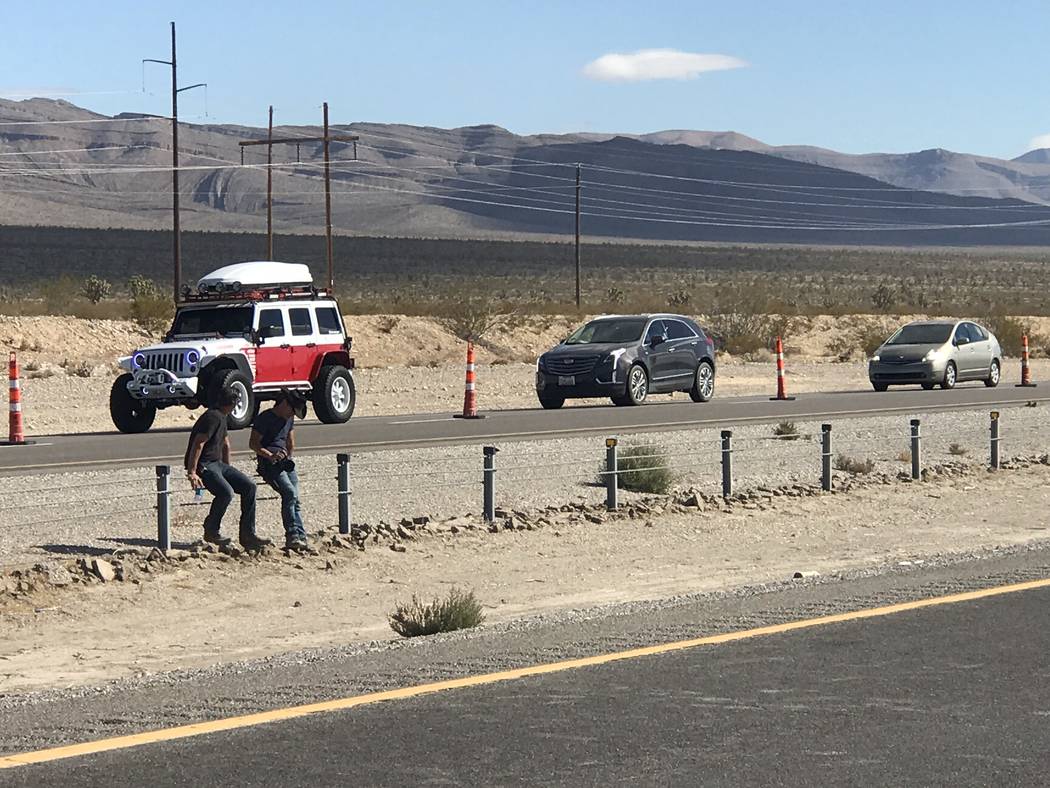 Jeffrey Meehan/Pahrump Valley Times Spectators of the record-setting speed event for Swedish supercar Koenigsegg's Agera RS on Nov. 4 at the Tecopa turnoff. Traffic from the southbound lanes were shifted onto the northbound side for several hours. 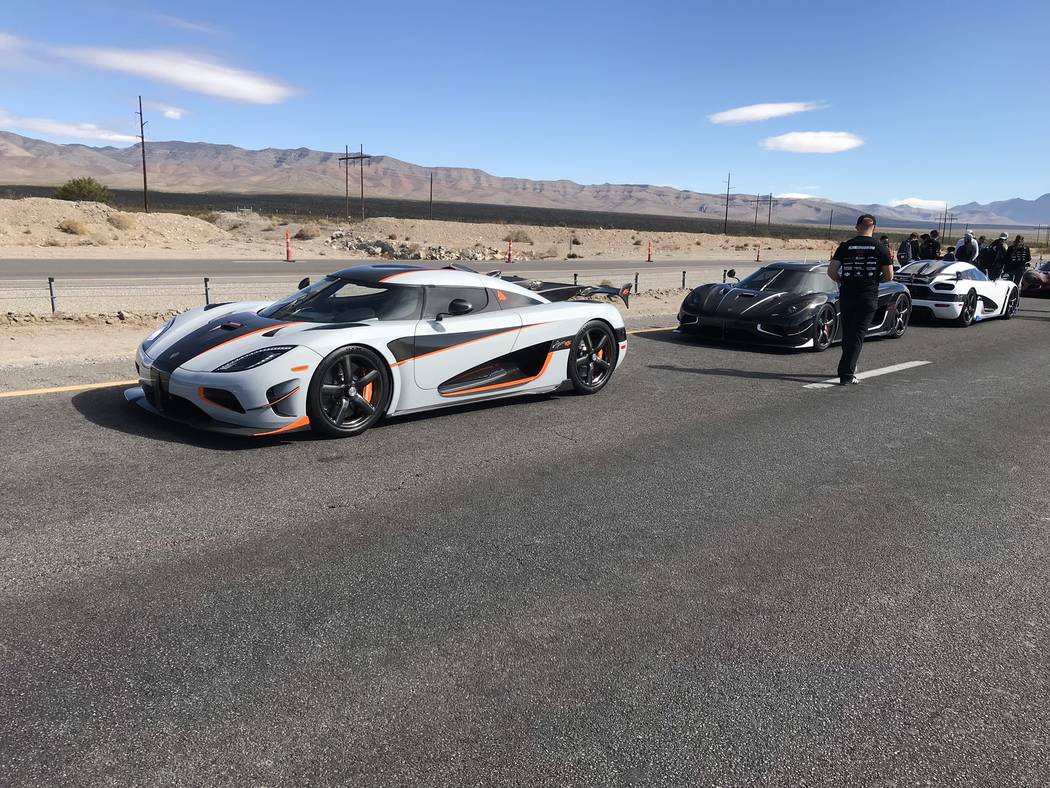 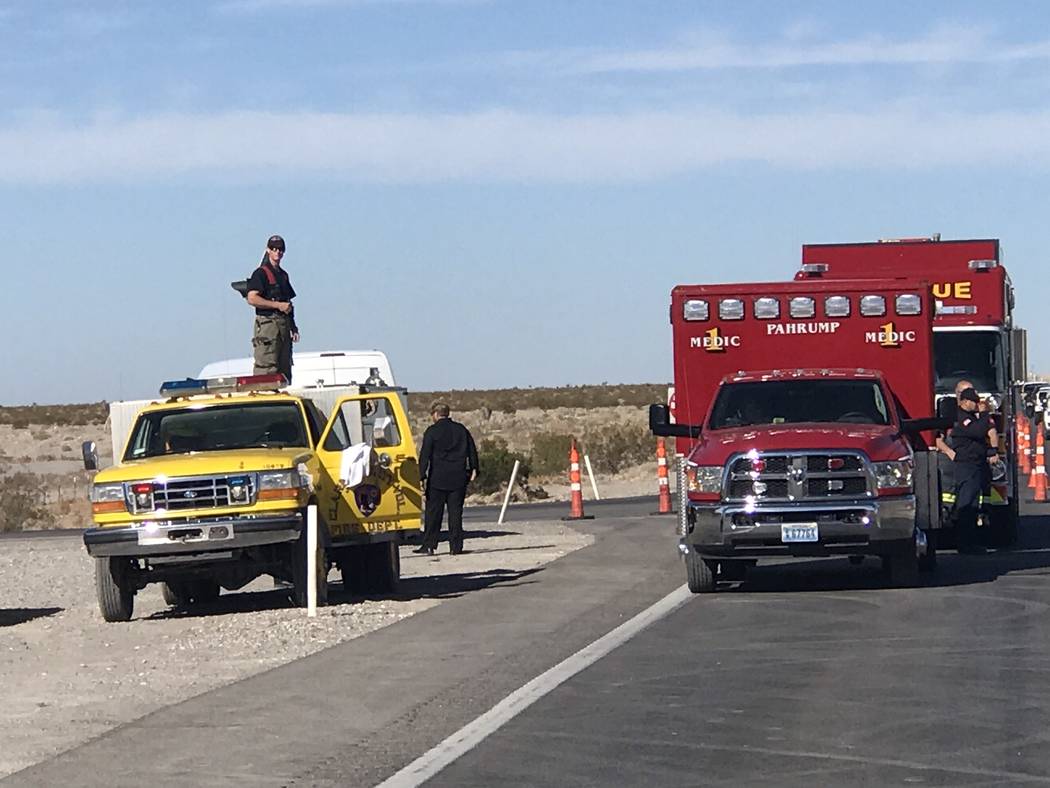 Jeffrey Meehan/Pahrump Valley Times Emergency and law enforcement personnel lined up at Highway 160 at the Tecopa turnoff on Nov. 4 in case of an emergency situation during a speed-record event. Several agencies, including the Nevada Highway Patrol, Pahrump Valley Fire and Rescue Services and the Nye County Sheriff's Department were in the area of Swedish car maker Koenigsegg ran its Agera RS model vehicle on an 11-mile stretch of the highway, breaking several speed records. 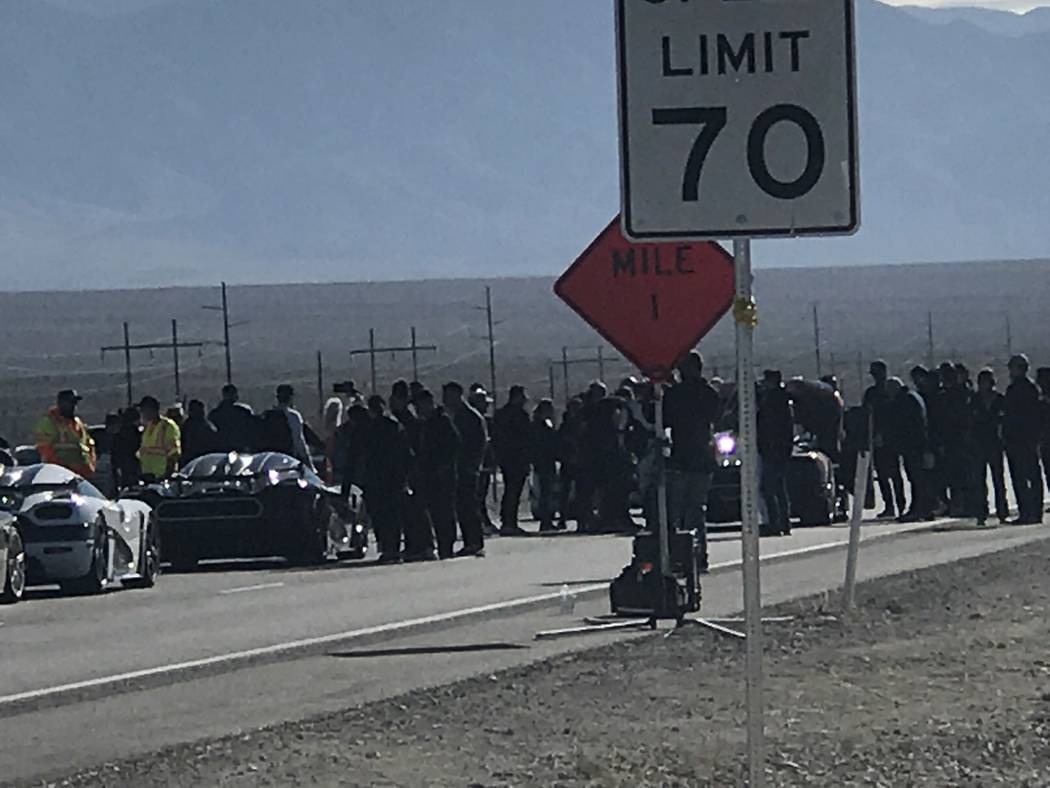 Jeffrey Meehan/Pahrump Valley Times Spectators and crew ready for a Koenigsegg Agera RS to make its run for speed history along an 11-mile stretch of Highway 160, between the Tecopa turnoff and Mountain Springs, on Nov. 4. The supercar hit multiple speed records along the Nevada highway.

Nevada Highway 160, the road that links Las Vegas and Pahrump and is a gateway to Death Valley, is now a road that many will equate to world speed records.

Swedish car maker Koenigsegg smashed multiple speed records along an 11-mile stretch of Highway 160, between the Tecopa turnoff and Mountain Springs, on Nov. 4. The event was hosted by the Spring Mountain Motor Resort and Country Club—a local race facility.

On the southbound lane of the highway, Koenigsegg’s 1,360-horsepower Agera RS supercar, driven by Koenigsegg factory driver Niklas Lilja, blazed across the desert floor to achieve an average speed of 277.9 mph on a two-way run, making it the fastest production car in the world.

“We’re very happy to be able to show what our products can do,” said Christian von Koenigsegg, CEO and founder of the supercar’s producer, Koenigsegg.

To get the record, the Agera RS, which can hold a price tag of more than $2 million, had to make its run, uphill and downhill, with the average of the two becoming the final speed on record, Koenigsegg added.

And the title goes to Koenigsegg

The last land speed record for a production vehicle was set by the Bugatti Veyron Super Sport in 2010 at nearly 268 mph (267.8 mph), over 10 mph below the Agera RS’s new numbers.

Guinness World Records defines a production car as a vehicle, in its original condition, that has no modifications or adjustments. That excludes those offered by the factory or manufacturer.

The speeds by Koenigsegg were verified by Racelogic, a U.K.-based company that designs and manufactures equipment that can be used to measure speed and other data from moving vehicles, according to information on the company’s website.

Racelogic’s VBOX 3i GPS logger was used to verify the Agera’s speeds, the company posted on Twitter.

The Agera RS also broke two other records on Nov. 4: fastest speed on an open public highway and the fastest time from zero to 249 mph (400 kph), and back down to zero, breaking the car’s own record from earlier this year.

In October, Koenigsegg announced the car had completed the exercise in 36.44 seconds. That announcement came just weeks after Bugatti announced its Chiron model had earned completed the zero to 249 mph and back to zero in record time at 42 seconds.

Koenigsegg’s Agera RS completed the task in under 34 seconds on Saturday, topping out at 249.3 mph (401.8 kph), giving the supercar another world record, Racelogic announced on Twitter.

According to guinnessworld.com, the fastest speed reached on a public highway was also hit in Nevada in 2012.

During the 2012 Nevada Open Road Challenge on Nevada Route 318, the record speed of 243.7 mph was hit by driver Jim Peruto, Guinness’ website stated.

Several months of preparation went into the record-breaking event, where Koenigsegg ran multiple attempts from 10 a.m. to about 3 p.m. on Nov. 4.

One hurdle, shutting down the highway, was somewhat costly.

“We have been working closely with them as a liaison to help them organize this event and the event is being put on by Straight and Narrow LLC, who are also members of our club,” Oscarson was quoted saying in that same article.

The racing facility received approval from the Nevada Department of Transportation to shut down one side of the highway, with southbound traffic shifting to the northbound lane, for two days, on Nov. 4-5. But they only needed to use one day to meet the grade.

Dozens of special guests, Koenigsegg representatives, media and others gathered at the site where the uphill test began, just south of the Tecopa turnoff on Highway 160.

At the testing site were several law enforcement and emergency personnel from the Nevada Highway Patrol, Pahrump Valley Fire and Rescue Services and the Nye County Sheriff’s Office.

But there was an issue.

“We’ve never had a long enough road to see what they can do,” Koenigsegg said.

That was until some of his contacts sent him looking at the Spring Mountain Motor Resort and Country Club, he said.

Media and spectators weren’t the only ones documenting the event.

A production company filmed the record-breaking day and is set to release the footage to the public at a later date.

Koenigsegg in the U.S.

Koenigsegg said the U.S. is the biggest market for his cars.

The 25 units of the Agera RS sold out in early 2016. And the next series of vehicles might not be out for a couple of years.

Koenigsegg said it takes about 4,000 hours to build a car, which are handmade.

“We’re coming out with a new model in two years, and hopefully these kinds of things will help build a following and make our existing customers happy and show what the cars can do, things like that,” he said. “It’s just exciting to push boundaries, generally.”