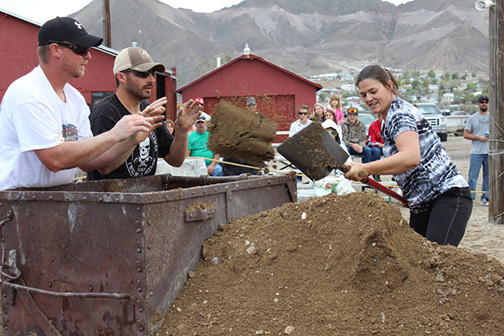 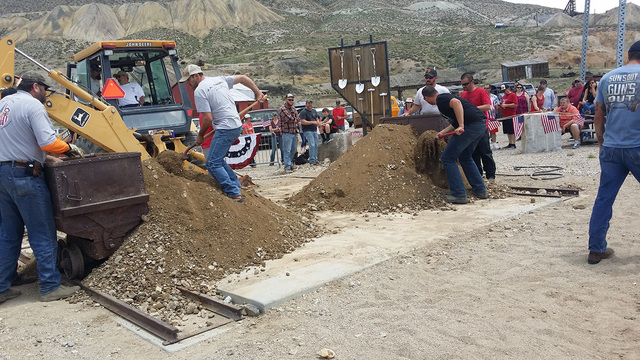 TONOPAH – There is no other sporting event in the county like the Nevada State Mining Championships at the Tonopah Historic Mining Park during Jim Butler Days. It truly is one of a kind, for it’s the only place one can throw dirt or hand drill and win money for doing it.

“I’m not even sure how many competitions there are,” Joni Eastley, organizer of the Tonopah competition said. “Carson City does a drilling contest (no mucking) during Nevada Day, Creed Colorado has an event, and I think there may be one in Montana. I think some of the mining colleges do collegiate events that include jackleg drills. And if memory serves, the Mackay School of Mines has a team.”

Of course it’s not about winning money, and all about preserving the history.

Jim Butler Days in Tonopah is an annual occurrance at the end of May and is a must-see if you haven’t seen it. One of the competitions is the mucking event. This year muckers from all over the state came to compete. But what is mucking and who does this? Is it just a competiton to see who throws more dirt on a pile?

This year there were 16 muckers attending the competition, 12 men and four women. The competition is always brutal and it is taken seriously by all the competitors. Mucking takes a lot out of a person and requires a person to be in good physical condition to win. Does this mean they train for this?

The event comes from the old mining days. Mucking is when a person uses a shovel to fill a mine cart. In the competition, muckers are required to fill an ore cart with one ton of muck and it is a timed event.

James Eason from Reno, who won this year’s mucking for the third year in a row and Toni Wombaker, a Pahrump resident and former state champion, took the time to reveal their secrets to successful mucking.

Eason has been mucking since he was a child and says he wins but doesn’t do any mucking all year. For him there is no training.

“I have been mucking since 1995,” he said. “I grew up doing this in my family. I competed as a kid and then did it in college on the Mackay Mining School team. So since college I only do it one time a year and that’s for this competition.”

Don’t get Eason wrong, muckers still must stay in shape to do this.

“I exercise and run and that’s all I do,” Eason said. “If you do this without working out it can be tough.”

Tough is an understatement, as Emma Baker, who won the women’s state championship this year and broke the state record, did so at a cost. She threw up continuously for 30 minutes after the contest, according to contest officials.

Eason talked about why he doesn’t need to practice.

“The reason why Tom can come out and drill (Tom Donovan, who won the single jack contest) is because he has done it also in college,” Eason said. “Many of these guys like Tom and I who win, did it in college. It’s all in the technique and form.”

When asked about why his time was slower by around 10 seconds from last year’s time and whether or not he was slowing down, he replied, “The time varies from year to year because of the shape of the dirt in the pile you have to muck,” he said. “When the pile is super wet you can get more dirt, but it’s heavier. So that’s why my time was different. It all depends on the dirt.”

As far as why Eason continues to do this, he said it all has to do with keeping history alive.

“There is no pressure for me to do this,” the champ said. “I do this because it’s part of Tonopah history and it’s fun and it’s tough. I am also passing this on to my kids. My daughter won her age bracket and my older son took second for his age.”

Former state women’s mucking champion Toni Wombaker, who took a year off this year, said she didn’t grow up mucking.

“I grew up watching it and I got the technique from watching my uncles muck,” Wombaker said. “Also I grew up with James Eason and I watched his partner, Brock Boscovich a lot. But when I was watching them I thought they were all crazy.”

She didn’t start mucking until 2009. “My father, (Bob Perchetti) started the mining competition,” she said. “And I started mucking because of him.”

Wombaker does believe in training. “I train to stay in shape,” Wombaker said. “This competition is about being in good shape and if I was in good shape, I can see not training for it, because it is all about form, endurance and going fast.”

She says when she first started, she struggled with the form.

“What helped me is that I watched old videos of myself mucking.”

Wombaker said if she can get in shape this year, she will be back next year.