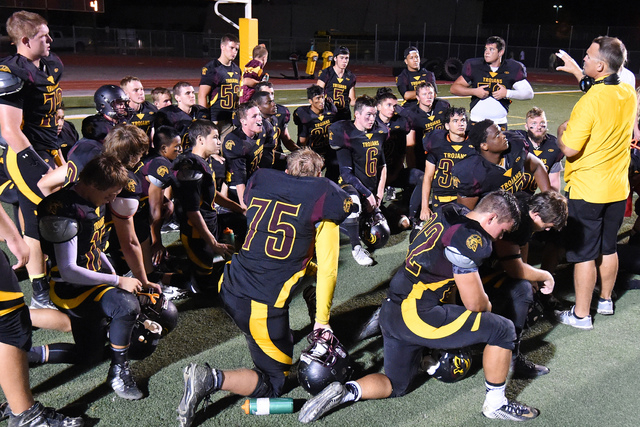 With January, comes the bowl games, the NFL playoffs and Super Bowl. Did you know there were 38 bowl games? It’s just a lot of football and so football is on my mind.

Watching Oregon lose to Ohio State on national TV got me thinking about Pahrump.

The Trojans have come a long way and like my other favorite team, the 49ers, they are looking for a coach.

The program is looking for a new coach, but not because Joe Clayton wasn’t doing well. Fans remember when the team was the doormat of the league. We were like Western at one time. Now we are not exactly a powerhouse, but teams don’t come to Pahrump looking for an easy win.

It’s hard to say who will continue where Joe left off. The problem in finding the coach is a nationwide epidemic. Young people coming out of college and getting into teaching just are not coaching. Why? Former Beatty athletic director, Leo Verzilli, said simply, young teachers are overwhelmed by all the extra things they have to do that comes with the job.

In addition to not having the time, coaches spend long hours away from their families and are not compensated well in Nevada. Combine this with the pressure to win and you get few takers.

In defense of the school districts in Nevada, money is hard to come by. The districts are in last place in a lot of categories academically and don’t have enough money to throw at athletic programs.

Are we a football town like some of the Texas towns? Not by a long shot, but we are getting there. We have no problem packing the stands. On a typical Friday night at a football game you can expect to see many people coming to see the local high school. The stands were packed all season long despite being a 4-5 team. The team came out and thrilled the fans every Friday night by winning all of its home games this year.

In addition to filling seats, to be considered a football town we need to win a few playoff games and make it to the state finals like Moapa does year in and year out. We have a ways to go, but who knows, with the right coach we can get there.

Somewhere out there our new coach is pondering whether or not to coach. He probably watched many of those bowl games and the NFL playoffs over the weekend.

The town is not short of talent. The team has some great young talent just waiting to be tapped. The football team is eager to play the game and wants to win. This winning spirit comes from one of its leaders, quarterback TJ Milk. He will be a senior next year and is a seasoned quarterback who can pass. Milk can throw in the pocket, and on the run. He is 5-11 and quick on his feet.

The team under Milk averaged 104-yards passing per game and 191-yards rushing. This year he had 53 completions for 911 yards. The offense is used to hitting the hole hard and running hard. The team has been known to break games wide open on the running game and the QB is not afraid to throw downfield.

The team had a great front line and next year some of those players will be returning like center Tyler Baumgarten at 6- foot-2 and 235 pounds.

Kelby Lindberg will be ready. I am sure he is already hitting the weight room this year. Lindberg currently stands at 6 foot 2 at 195 pounds. Look for him to put on 25 pounds. He should be the leading tight end for the Trojans next year with Jeremiah England gone next year.

In the rushing department, Tommy Gascoigne should nearly double his production running next year depending on the offensive system. He runs like Frank Gore of the 49ers and just sticks his head down and runs towards daylight.

Devlin Dillan is another upcoming receiver or running back. He had 185 all-purpose yards and three touchdowns for the Trojans this year. I am sure we will see more of him.

The new coach is probably looking at what he has to work with next year and is seeing all the seniors leaving, but what he should know is that Pop Warner has been doing well in Pahrump and so has the middle school football program. This keeps a constant stream of football players coming up to the high school. The program had over 100 players come out for the sport last season.

Could the team do well if the offensive system is changed? Of course it can, the players just want a coach to lead them to victory. They have proven they can win under any system.

Of course there are rumors who the new coach will be. I heard the other day that Jim Harbough was considering coming to Pahrump, but apparently he only ran out of gas on his way to Michigan. The other rumor is that school is close to choosing a new football coach. If they are, this is great news.

In all seriousness, whoever comes out to coach Pahrump knows he is doing it because he loves the town and loves the game of football.

He also knows that the only pay he will get is seeing the faces of those young men after they win a game. Hopefully those little things are big enough for him to take the job.