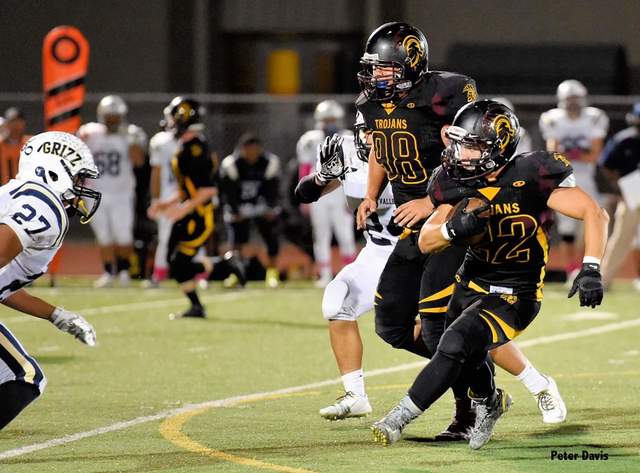 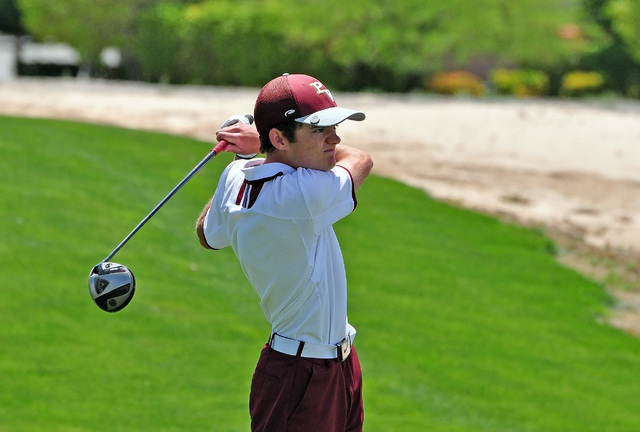 Horace Langford Jr / Pahrump Valley Times Golfer Derek Moore swung his last club for the Trojans in May at the state tournament at Mountain Falls. The Trojans finished second to Faith Lutheran. 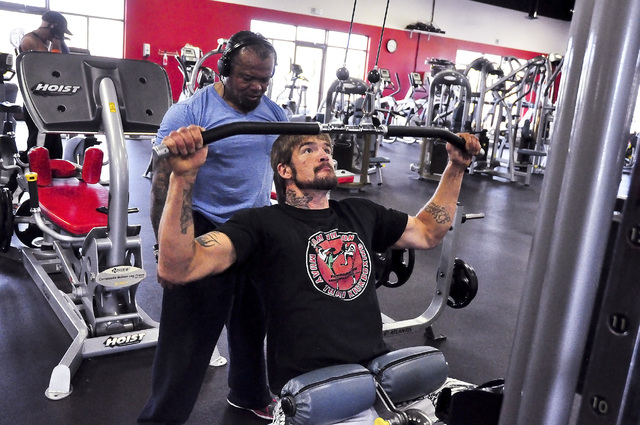 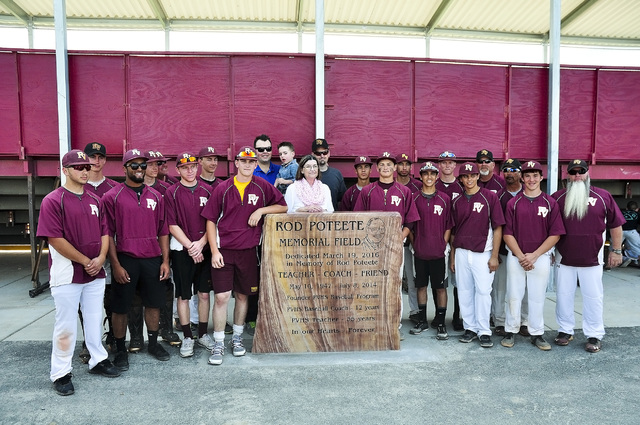 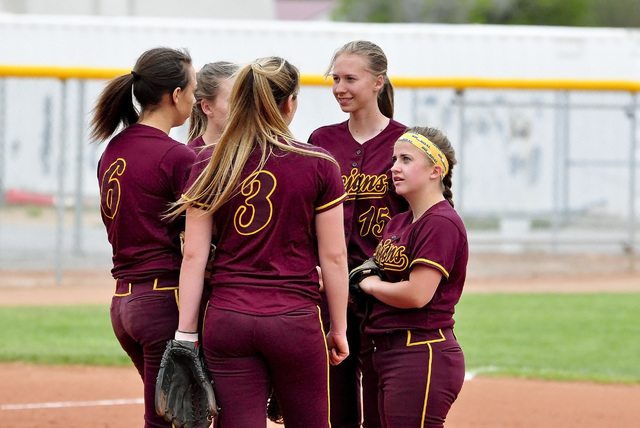 Horace Langford Jr. / Pahrump Valley Times The 2016 PVHS Softball team finished fourth in the old Division 1A and made it to the third round of the playoffs. 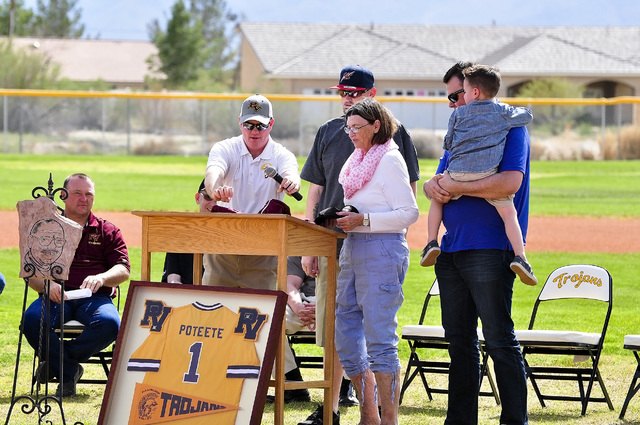 Horace Langford Jr. / Pahrump Valley Times At the Rod Poteete Memorial dedication on March 21 friends, family and former members of his team gather on the field to honor the man they once called coach and remember old times. 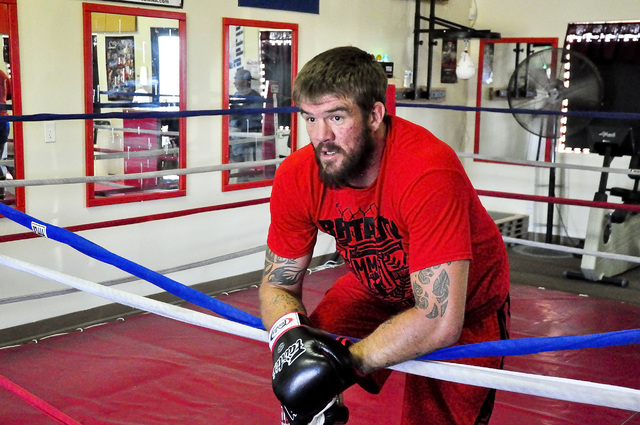 Horace Langford Jr. / Pahrump Valley Times Brandon Schneider thrilled the town with his toughness in the ring as an amateur MMA fighter. He hung up the gloves and finished his amateur career as the reigning Tuff-N-Uff light heavy weight champion. 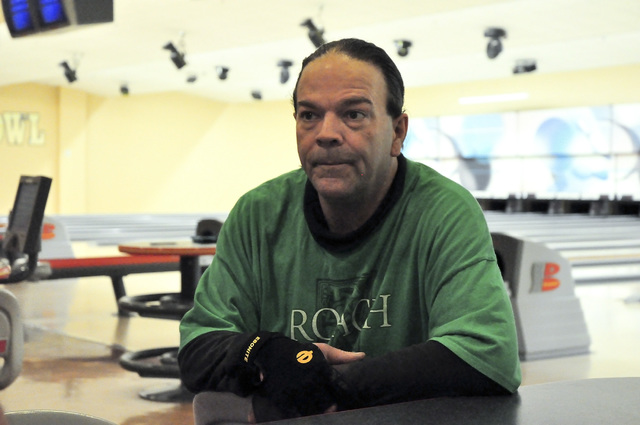 This year, more than others, is about change in people rather than events. Sure, there were some events worth mentioning, but for the most part, 2016 was a year of people coming and going more than anything else. The PVT looks at 2016 sports in two parts, with the second part coming out in Friday’s issue.

Winter sportsin January were not pretty for the Trojans basketball teams, they both finished in last place. For the Beatty girls, though, Beatty coach Aimee Senior and her squad had a productive year. The Hornets finished in third place, finishing 13-7. This team went to the playoffs, losing to Pahranagat Valley by two points in the second round. Senior was the Division 4 coach of the year.

The Trojans wrestling team had a rebuilding year, with only one wrestler making it to state; that was senior Gino Gusman, at 126 pounds.

The fight was the top bout on the card for the amateur Tuff-N-Nuff promotion. Schneider (5-3) said he just followed his game plan and never deviated from it.

“Cordova tried to sucker me into his game plan early on in the fight with the taunting,” Schneider said about the fight. “I had the reach advantage and I just stayed away from his punches until he got me in the mouth. I then reacted quickly to that and sprung back up.”

Schneider was a fighter that Pahrumpians loved to watch fight and it didn’t matter if the fight was only an amateur one. When he fought he filled the arena with fans.

Perhaps they came because he exemplified what hard work can get you. Schneider fought for his dream of becoming a professional fighter, not in the arena, but every day working hard as a mason to provide food for his son and training hard at the gym in his spare time. Although he decided to give up on his dream to provide for his son, Schneider to many will always be a champion.

After years of getting roasted in the spring sun, Trojans fans got some shade.

The Trojans baseball field got a facelift during the winter months.

In December of 2015, the school district hired local contractors to complete a new shade area and backstop for the baseball field. The construction was finished in the second week of January.

Loss of a Trojans fan

In January, the Trojans community lost its number one fan when Eusevia Veloz-Sanchez passed at age 79 on Jan. 12.

If you could measure how passionate a person is about a team, then Veloz-Sanchez would probably be pretty close to being the number one Pahrump Valley Trojans fan. Sanchez-Veloz was the mother of eight boys and two girls, 18 grandchildren, and 22 great-grandchildren. She was the widow of Ben Veloz, who passed away in 2005.

Daughter Maggie Villa-Veloz said that her mother was unique for our time.

“She really was never involved with the community or politics,” she said. “She was our mother. That was her job. She didn’t even drive. My mother and family moved to Hafen Ranch in 1976. The one thing she did was watch over all of us, cooking and cleaning. That was a big job to keep 10 kids going.”

Tragedy struck the valley again, but this time to the bowling community on Feb. 16 when one of Pahrump’s top bowlers, Nocky Roach, passed. One of the best bowlers in town, Enoch (“Nocky”) Roach, died at age 46. It was tragic because he was both talented and so young. According to friends, he had apparently gone to work after bowling on Saturday and was found at his job at Albertsons.

Bill Santoro, who has been bowling in Pahrump for over 20 years and once ran the bowling alley at the old Mountain View Casino, said he never saw a better bowler in town.

“He was the best right-handed bowler that I have ever seen,” Santoro said. “He was very consistent.”

Of course, Nocky was modest and said he was one of the top three.

Bowling was his life and he bowled in five leagues at the Pahrump Nugget Bowling Center.

Also in February, a young football player named Tommy Gascoigne fulfilled his dream when he was accepted to the U.S. Military Academy at West Point. His success showed the world that the students at Pahrump Valley High School are just as competitive as any other school in the country. The military academy told him he was the first from his high school ever to go to West Point.

Gascoigne said after West Point that he wants to serve in a special forces outfit.

“Since the first year I coached Tommy, when he was 8 years old, I knew there was something special about this kid,” Clayton said. “At the time, though, I didn’t realize that he would be so special that he would reach his dream of making it to West Point.”

The Trojans football program changed coaches yet again as first-year coach Adam Gent resigned in the winter months. Under Gent, the Trojans were 3-6 overall, 2-5 Sunset League.

Gent wrote a letter to Pahrump Valley, addressing it “Dearest Pahrump Valley Football Fans,” where he expressed how hard it was to leave this town.

“The last month has been a tough one, as I have been trying to decide if I should take an opportunity that recently presented itself,” he said. “Though it is a great opportunity to advance my coaching career, it wasn’t an easy decision because of the special things happening with our football program.”

He then complimented the kids in the football program.

Gent’s departure opened the door for the return of Joe Clayton.

Joe Clayton made this announcement in March.

Pahrump Valley High made it official and announced its new football coach for next season. He returned to the gridiron after a year of Gent ball, who said he will be moving up to coaching college football.

Clayton had left due to family matters. He had coached for 12 straight years with seven of those years at the high school. The last three years were as the head football coach.

On March 21, Rod Poteete, a former Pahrump Valley High School teacher and coach, received one of the highest honors that a school can bestow on a former teacher. The high school dedicated the baseball field in his name.

Of course, it wasn’t just any field. To the late Poteete, who died of cancer in 2014, this field was his “Field of Dreams,” for he was a man who was passionate about baseball. At the beginning of Pahrump baseball, he built the first baseball field.

He was the first baseball coach the high school had. Things were different back in the 70’s. Poteete had to scramble for money and equipment. The school was so cash-strapped that he even donated an old garage door he had lying around for the first scoreboard.

Poteete also taught at the high school from 1974 until 2009, teaching just about every subject in that time. He was an avid sports fan and also he was quite the baseball player in his day. Back in the 60’s he pitched for the Stanford Cardinals and even went to the college world series. He was also a minor league baseball pitcher, pitching two years for a Dodgers farm team.

There was a specially-designed stone made that had Poteete’s image and name engraved on it. The stone was installed by one of his former students, Ronnie Murphy.

Many friends and family and Rod’s former baseball and basketball players attended as the field was renamed “Rod Poteete Memorial Field.”

The boys golf team had the most successful season of the spring sports, going to state and finishing second to Faith Lutheran.

At state, the Trojans finished 77 strokes behind Faith Lutheran and did the same at the regional tournament. This was the boys’ third appearance at state in three years.

The girls softball team finished in fourth place and made it to the third round of the playoffs.

The boys baseball team missed the playoffs by one place, finishing in fifth. The track team had an uneventful year.

Trojans ended the 2016 spring season with hope. For the realignment process had Sierra Vista, Spring Valley, Clark and Faith Lutheran leaving the Division 1A and from that came the new Class 3A. This new Class 3 A Sunset League had Pahrump playing with Sunrise Mountain, Desert Pines, Mojave and Western in the fall.