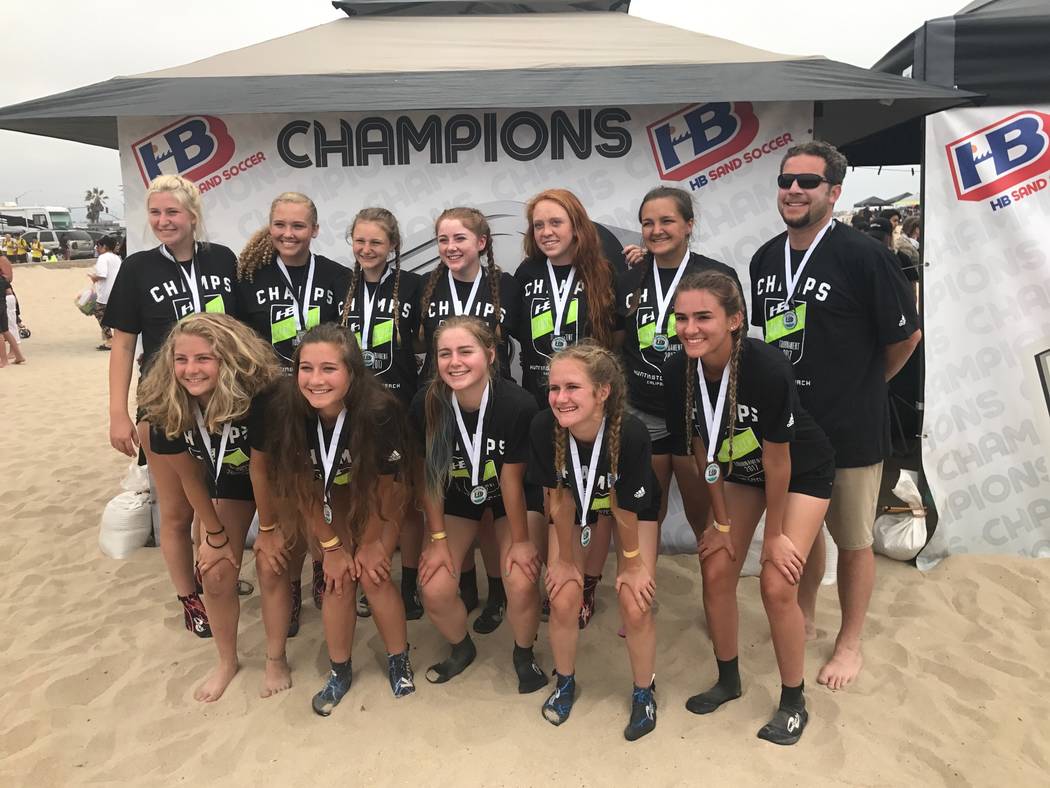 The “Vegas Girls,” a team made up of players from the Downtown Las Vegas Soccer Club with three local girls, Kaitlyn Carrington, Kathy Niles, and Vaniah Vitto, were victorious, winning the 2017 Huntington Beach Sand Soccer Tournament over the weekend.

The Vegas Girls exhibited a high level of teamwork, camaraderie, skill, endurance and mental and physical toughness, as they worked and played together in the rough and tumble sport that is a much different game than the sport they regularly enjoy.

To be successful, sand soccer requires different strategies and skill sets. As an example, on grass, the game can be a patient, studied exhibition of passing, “through balls,” and “crosses” to score the seemingly elusive goals needed to win.

Sand soccer is a fast-paced game where passing lanes are scarce and difficult due to the smaller field, and the fact that the ball does not roll well in pitted, dry, beach sand. The game can quickly become a spectator-friendly frenetic tangle of players, flying sand and frequent shots.

The girls won their first game, tied their second, won the semi-final match, and played for the championship on June 4, giving the girls plenty of time to enjoy the local sights, beautiful beach, and ultimate victory.

Sand soccer is actually played on the beach, without shoes, (most athletes opting to wear “sand socks” while many played barefoot) a different kind of soccer ball, and various rule changes designed to accommodate the smaller field and fast-paced nature of the game.

Instead of the 60-90 minute games, the girls are accustomed to, the sand soccer games are comprised of two 20-minute halves.

The team was coached by Samuel Barnett. The girls are part of a very active year-round soccer environment known as “club soccer” made up of teams and individuals that want to play soccer at the highest level, many of whom have aspirations of continuing to play soccer after high school.

Carrington, Niles, and Vitto are excited about playing soccer in their senior year for the Pahrump Valley High Trojans. Conditioning for the Trojan soccer program begins later this month.