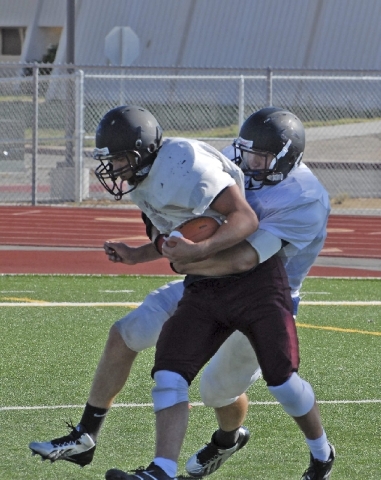 Last year’s Trojans offense ran the pistol and it is no secret it fired blanks.

The team could not run the ball nor could they pass.

Trojans quarterback AJ Segura spent most of the time running from defenders instead of running plays.

This year, the Trojans are different. The team is stronger in several areas.

Coach Joe Clayton has simplified the offense and will be using a new play called the Jet Sweep.

In addition, Clayton is really excited about his new offensive line and their size. With the line comes a new weapon, junior tight end Jeremiah England.

England was a sophomore last year when he came out for football, which was his first year playing the game.

England did not get any varsity playing time and played entirely with the junior varsity squad.

“I really like the game and last year I just decided to play,” England said. “I went out and played it and liked it. I was definitely lacking in knowledge on the sport, but this year is different. My view of the game is a lot better.”

When he came out he was on the scrawny side at 6 feet 4 inches tall and 190 pounds. He needed to bulk up a bit, so he hit the weights.

“He is big and strong with great hands. He works and works and I am excited about him. He is great kid to be around. He gets good grades and it is hard to find something negative to say about him,” Clayton said.

England will allow Trojans quarterbacks AJ Segura and TJ Milk to throw high out of the reach of the opposing defense. Something the Trojans could not do last year because they did not have any height in their receivers.

“Our idea is to try to teach him to climb the ladder,” the coach said. “He gets up high and nobody else will get to the ball but him. He played at the camp and had some good catches. Having the big tight ends adds to our running game as well. It’s just a bonus that he has good hands and can block.”

England says in the junior varsity games it took two or three players to bring him down. He hopes to bring this game to the varsity level. He believes this year should be a good year for him and so far he has had some success early in the summer when the team went to the Southern Utah University Football Camp.

“I grew from the experience,” he said. “The whole team grew from the camp and I think we are ready for the season. The camp really built up our confidence. My goal for the season is really to help our team as best as I can. I want to get some touchdowns and try not to drop any passes. Also, I am working on my speed.”

England should be a great addition to the team in just his blocking alone. If he makes catches this will be icing on the cake.

The tight end feels if all goes well he can take his good grades to college and play some more football.