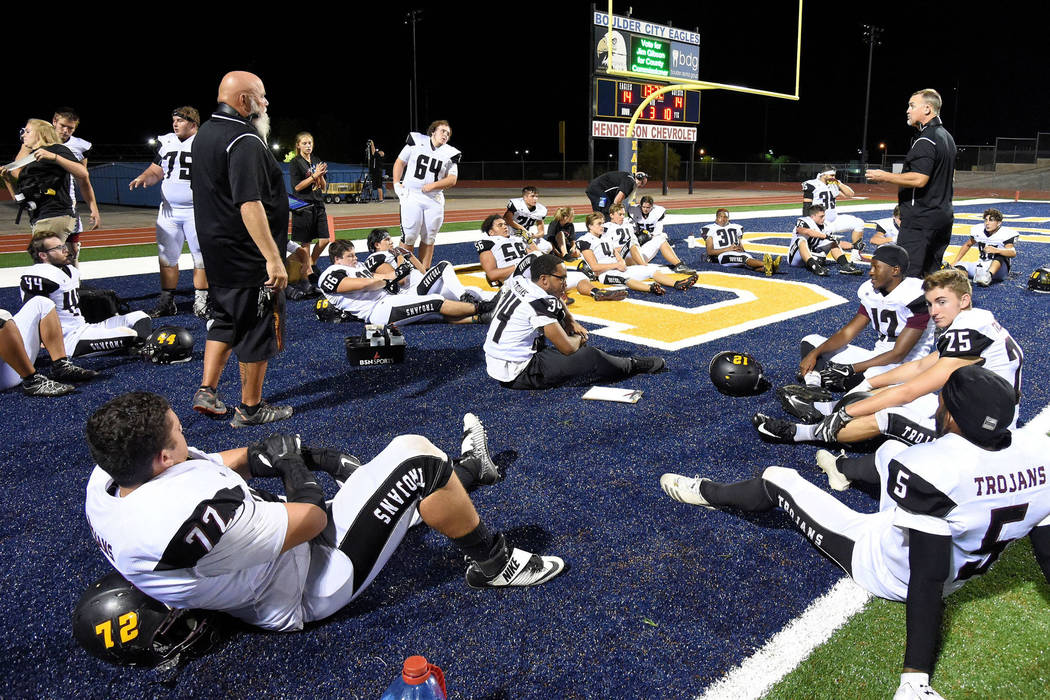 Peter Davis/Special to the Pahrump Valley Times Pahrump Valley football coach Joe Clayton, right, talks to his team at halftime of a 32-28 loss to Boulder City on Sept. 7. 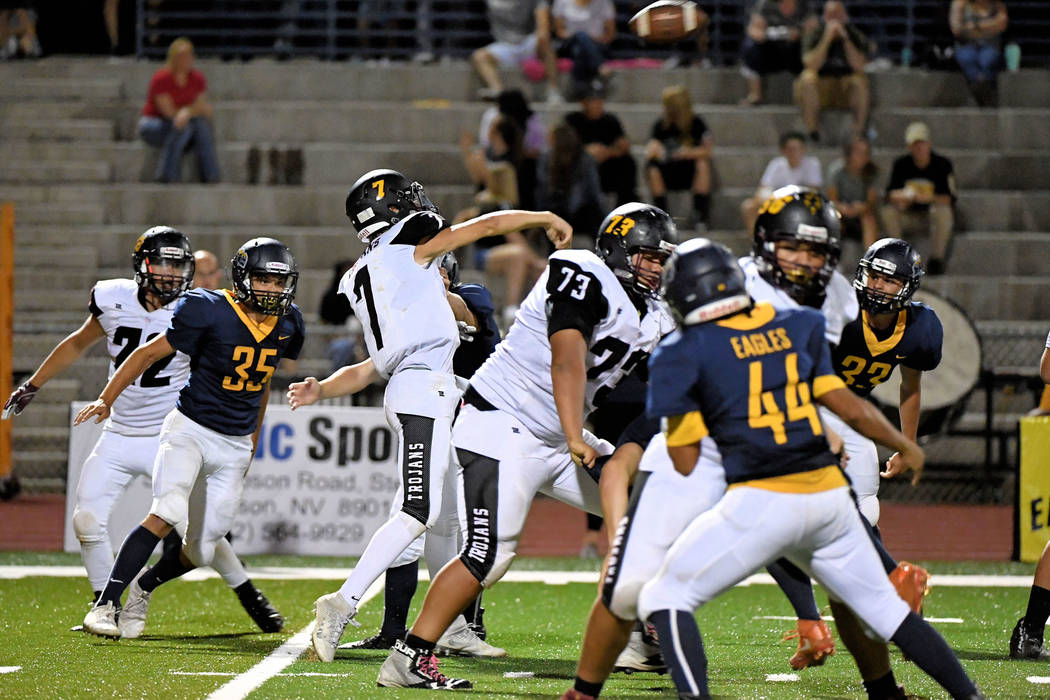 Peter Davis/Special to the Pahrump Valley Times Sophomore quarterback Dylan Wright uncorks a pass against Boulder City. Wright threw for 116 yards and a touchdown in a 32-28 Pahrump Valley loss. 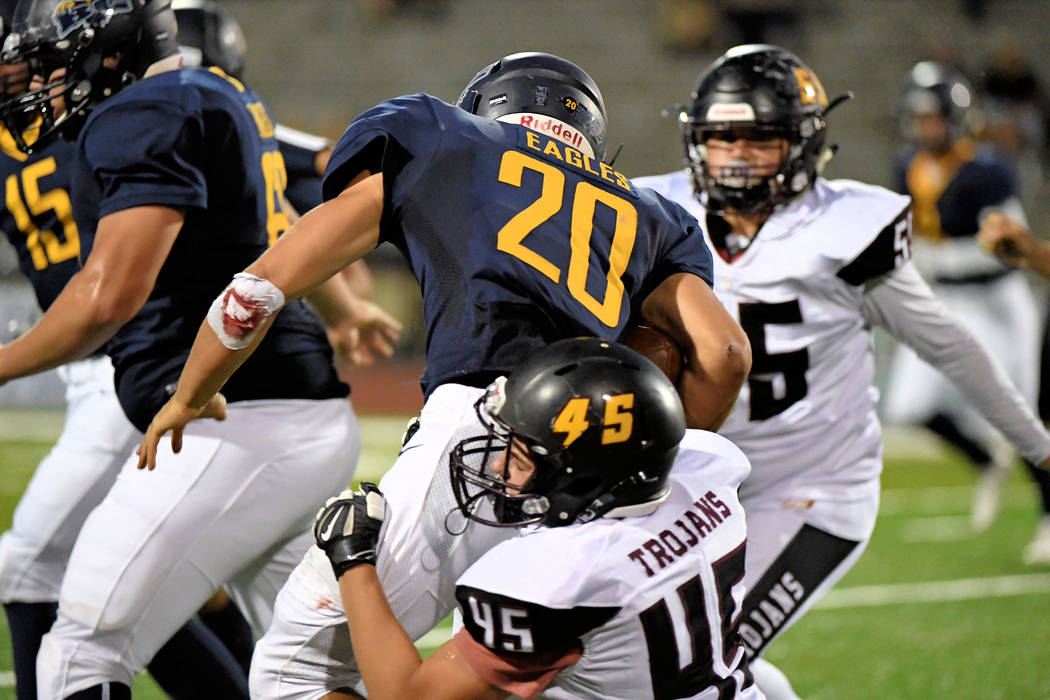 You are what your record says you are.

NFL coaching icon Bill Parcells’ well-known saying means that a close loss is still a loss and a narrow win is still a win. There is a reason, after all, why they keep score.

You know where this is going. But stay with me, it gets better.

Pahrump Valley is 1-3 after completing its nonleague schedule with a 32-28 loss to Boulder City two weeks ago. It’s safe to say that nobody connected with the program expected to be 1-3 after four games. It’s even safer to say nobody is particularly pleased about it, at least if you overheard any of the, um, discussion that took place in one of the end zones afterward.

From a distance, it was easy to hear coaches being rather direct with the players, although it was impossible to make out exactly what was being said. But when head coach Joe Clayton’s turn came, every word was crystal clear, no Miracle Ear necessary.

Whether or not words translate into action won’t be known until tonight at Rancho High School, when the Trojans open Class 3A Sunset League play against Democracy Prep.

Having a week off after that demoralizing loss in Boulder City is a double-edged sword. On the one hand, it would have been something to see a fired-up group of Trojans charge the field loaded for bear after what had to be an intense week of practice. On the other hand, perhaps spending a week focusing on themselves rather than an upcoming opponent could very well have done everyone some good.

Pahrump Valley is a 1-3 football team. That’s what the record says, and there’s no getting around it.

It’s also true the Trojans are 10 points away from being a 4-0 football team (going with how many points it would have taken to win each game by a point). Of course, the flip side of that is that in games that could have gone either way, the Trojans are winless.

Another one of those dastardly double-edged swords.

After losing to Virgin Valley to go 0-2, each player and coach asked affirmed his confidence in the team. In fact, more than one had an expression that said, “What kind of a silly question is that?” Luckily, they are far too polite to actually say that.

The question just as easily could be asked again after two more losses. Most likely, you would get the same answer, but probably without the expression. But talk is cheap.

So while Pahrump Valley is a 1-3 football team — that’s been well established by now, right? — there remain two completely different possibilities: This team is not as good as people thought it was, or the tougher part of the schedule is behind it and the same kind of effort — minus some mistakes — will bring better results the rest of the way.

So what’s next? Don’t mention this to Joe Clayton, who does not want to hear it (and his players shouldn’t be thinking it), but what’s ahead is a mediocre Class 3A Sunset League schedule. The Trojans went 2-3 in the league last year, and every team they lost to is gone. All three of them. Moved on. Or over. Either way, the Trojans will not face a team the rest of the way that beat them last year before the playoffs.

The teams in the league this year are a combined 10-14. Cheyenne (4-1) looks pretty good, and Del Sol (3-2) certainly can throw the ball, which doesn’t bode well for Pahrump Valley. Clayton has said that opponents see on film that the Trojans’ pass defense is a weakness and throw the ball more against them as a result. But after those two, the league doesn’t look all that good, and the top three teams will make the playoffs.

Democracy Prep is 1-4. Among the losses are three teams the Trojans have played: Boulder City (a 23-8 loss), Sunrise Mountain (a 24-13 loss to a team Pahrump Valley routed), and Virgin Valley (33-18). Compare the scores. Yes, I know the transitive property doesn’t work in sports, but that’s a lot of evidence.

Valley is 2-3, but the wins are against perennially downtrodden Rancho and that same Sunrise Mountain team. The Vikings have given up 103 points in their three losses. Not very scary.

Which brings us back to Pahrump Valley. As previously stated, the Trojans are a 1-3 football team. Right now.

If there is one problem other than a possible decrease in confidence, it’s injuries. The Trojans started with a thin roster.

Clayton said Dee Brown, last year’s leading rusher who has not played this season, is now officially out for the year and will need surgery for a nerve issue. Josh Belcher, who has already missed some time, is now also out with a knee injury, and Anthony Pearson is done for the year with a shoulder injury.

Clayton said Tyler Floyd is healthy after going through the concussion protocol, but sophomore Dylan Wright, who found Joey Koenig twice for 116 yards against Boulder City, will start again at quarterback against Democracy Prep.

But they all know that, and the coaches know this team is good enough to get those things right. Doing it, of course, is another matter. But tonight would be a great time for a fresh start.

In Sunset League play, Pahrump Valley is 0-0. Cheyenne is 0-0. So is Del Sol. Democracy Prep, Valley and Western all are 0-0.

You are what your record says you are.