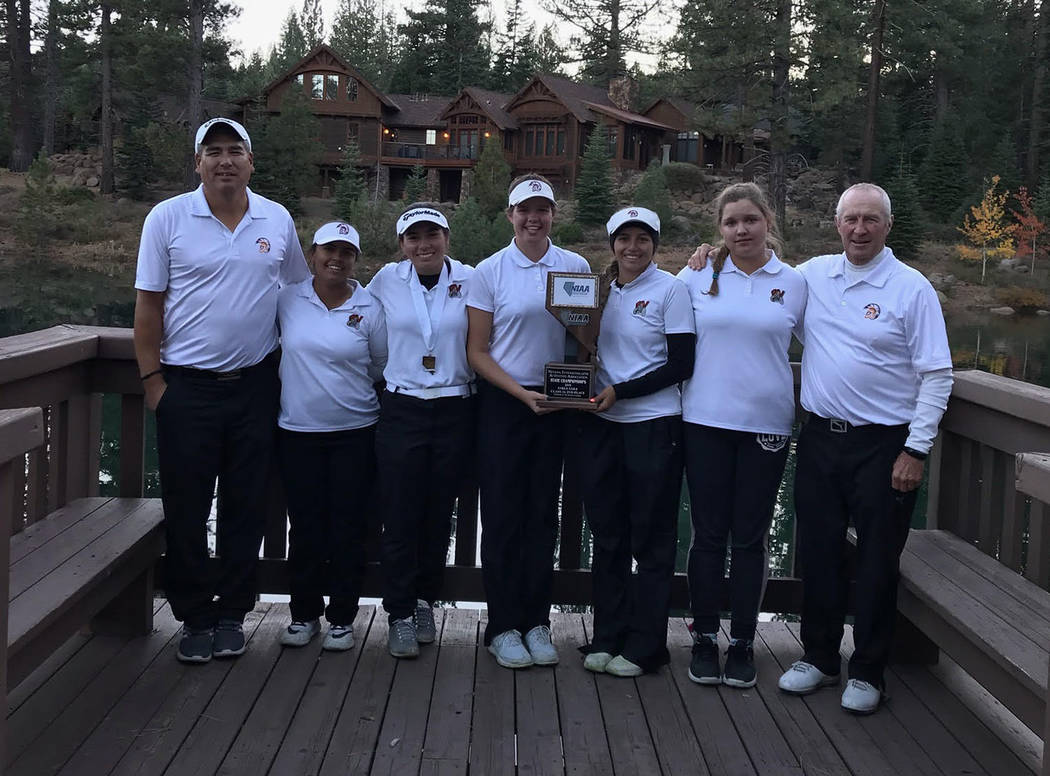 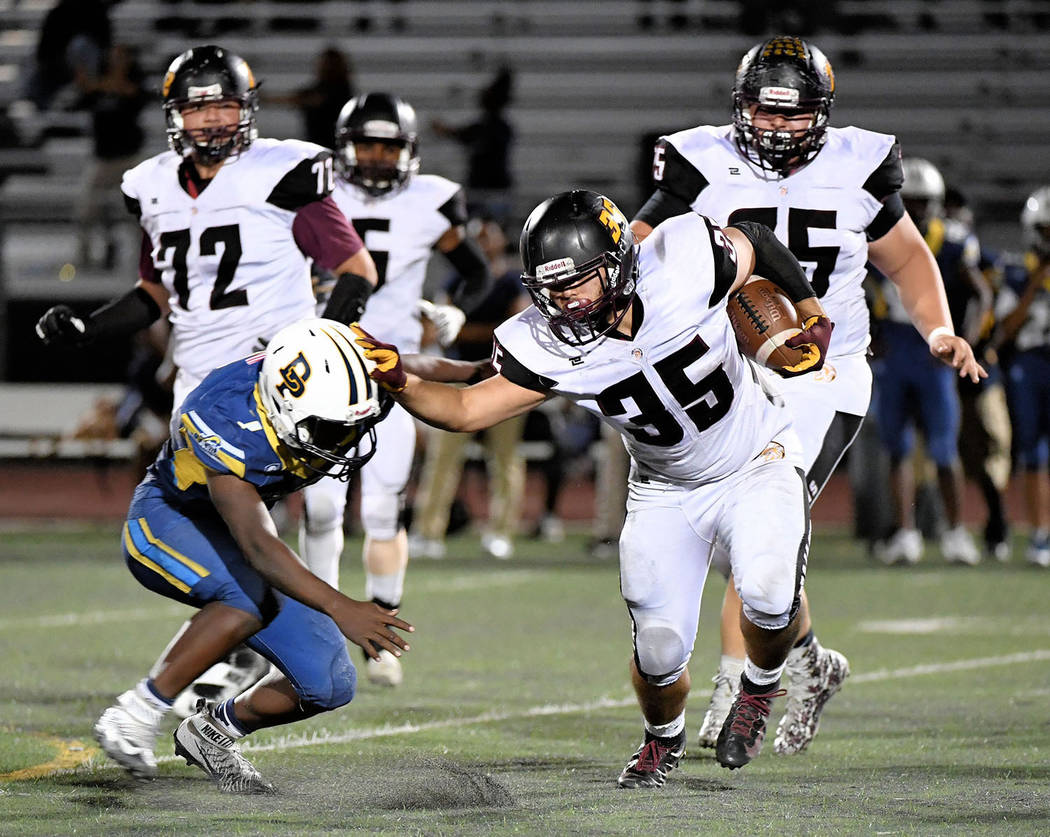 Peter Davis/Special to the Pahrump Valley Times Pahrump Valley senior running back Nico Velazquez, shown during a Sept. 21 game against Democracy Prep in Las Vegas, finished with 1,622 all-purpose yards and 19 total touchdowns as the Trojans went 7-4 and won the Sunset League title. 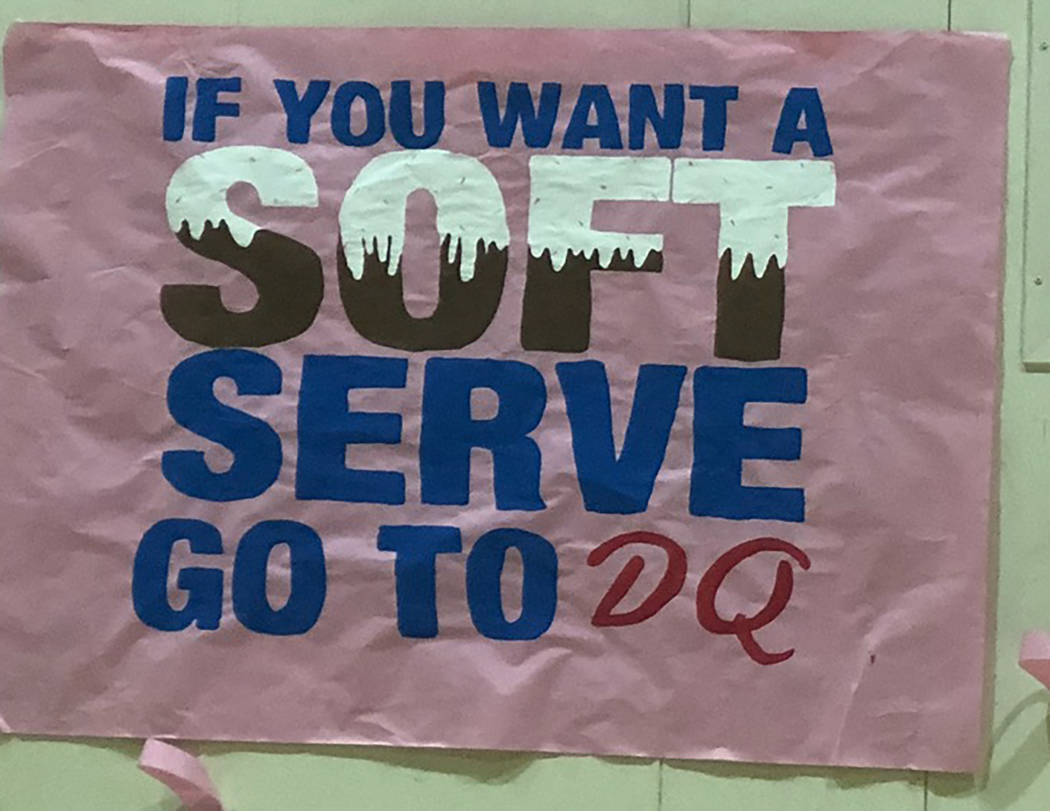 Tom Rysinski/Pahrump Valley Times The Pahrump Valley High School girls volleyball team's Pink Out match brought out the creativity in the signs showing support for the Trojans in their home match against Mojave. 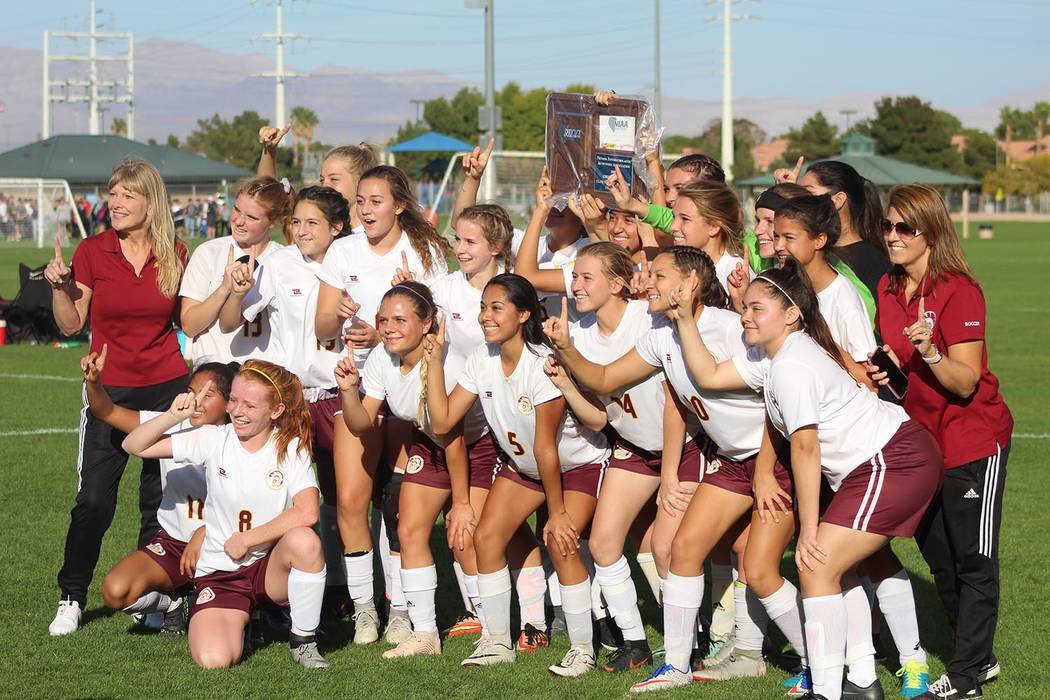 Tom Rysinski/Pahrump Valley Times Pahrump Valley girls soccer players and coaches pose with the Class 3A Southern Region championship trophy after their 1-0 win over Western on Nov. 3 in Las Vegas.

The Sunset League provides little competition in many sports, and realignment this year weakened it even further, but Pahrump Valley teams and individual athletes stepped up, again and again, to go beyond just doing well in league competition.

The fall season was one of success across the board, from the football team winning its first playoff game in 40 years to the girls soccer team returning to state in a “rebuilding” year to two teams claiming region championships. Along the way, there were drama, outstanding individual performances and even a bit of humor.

First, the girls golf team, which literally had no competition in three of five Sunset League matches and routed Del Sol in the other two by 129 and 142 strokes, headed to Mesquite for the Southern Region Tournament with eyes clearly focused on rival Boulder City.

And the Eagles played well, placing five golfers among the top nine. But Pahrump Valley sophomore Breanne Nygaard’s chase for the individual title, while coming up two strokes shy of Western’s Carolyn Lemon, was enough to pull the Trojans past the Eagles. Nygaard shot even-par 72 on the second day of the tournament to finish at 153, a full 15 strokes ahead of Boulder City’s best, third-place Ryann Reese.

That margin helped overcome the Eagles’ balance, as Pahrump Valley edged Boulder City by just three strokes for the region title. Makalea Petrie (fourth, 171), Jessica Pearson (eighth, 198) and Anastassia Furman (10th, 207) contributed to the team score of 729 for the Trojans.

Nygaard, Petrie and Pearson were named first-team all-Southern Region, while Furman was chosen for the second team.

Three weeks later, the girls soccer team accomplished the same feat. A year after falling to Sunrise Mountain in the region final, a much younger edition of the Trojans returned to the title game in dramatic fashion, following a 1-0 win over Moapa Valley with a 2-2 draw with Sunrise Mountain that the Trojans won on penalty kicks.

That brought Pahrump Valley into the final against Sunset League rival Western, a team the Trojans had split two league games with during the regular season. And for about 75 minutes they were split again, with neither team mustering much of an offense. But an odd bounce brought the ball to Makayla Gent at point-blank range, and the sophomore scored the game’s only goal to give the Trojans the trophy that had eluded them last season.

“It was our team,” Gent said after the game. “We were working our butts off the entire time. And that goal wasn’t me, it was everyone working together the entire game.”

The girls volleyball team finished 17-12, but the Trojans went 11-1 in the Sunset to share first place with Mojave. The Trojans defeated the Rattlers in their first meeting in North Las Vegas, as Elaina Dattilio posted 10 kills, Nicky Velazquez added seven and Jackie Stobbe recorded 19 assists in a dramatic 19-25, 25-21, 25-23, 10-25, 15-12 victory.

The Trojans’ season ended in the regional semifinals with a 3-0 loss to eventual Class 3A state champion Boulder City.

In cross-country, the Trojans boys team came up with a strong effort Oct. 13 at Basic High School to win the Sunset League title. Despite Valley’s Christian Franklin dominating the day by running the 5,000-meter course in 16 minutes, 0.4 seconds, the Trojans’ balance overcame the Vikings.

The Trojans went on to finish second to Valley in the Southern Region meet and fifth in the Class 3A state championships behind three Northern Nevada schools and Valley, with both meets at Veterans Memorial Park in Boulder City.

“I think I’m going to have a heart attack.” — football coach Joe Clayton after the Trojans defeated Boulder City in the playoffs.

“I played for the tennis club last year, and we had a lot of people. I don’t know where they all went. Probably died or something.” — sophomore tennis player Veronica Dela Rosa, on the small size of the roster for the Trojans’ first varsity season.

“Don’t put any of my sarcastic (expletive) in the paper.” — a coach who does not need to be identified, uttered while placing a hand firmly over the microphone of a digital recorder.

This was a surprisingly easy call. On Sept. 6, Pahrump Valley’s boys soccer team welcomed Mojave to Trojan Field for their first Sunset League game of the season. The Trojans held a lead for much of the game, but the Rattlers tied it with just five minutes to go and overtime loomed.

But Christopher Vega was having none of it. The freshman made the most of a late run, scoring with less than a minute left to give the Trojans a dramatic 2-1 win. Mojave finished 12-5, 8-4 in the Sunset, so it was a quality win and, considering the Trojans made the playoffs by one game, every league win counted.

“Once I got the ball I just ran with it,” Vega said after the game. “Right when I saw the keeper, I just shot the ball. It just happened.”

Seriously, the entire Trojans football team could be listed here, but the player who best symbolized Pahrump Valley football this fall was the team’s most visible force.

Sometimes he seems smaller, such as when he’s hitting a hole quickly, but Velazquez mostly left speed to fellow senior running back Casey Flennory. More often, Velazquez seemed bigger, as he will be best remembered for his power, his refusal to go down after the first hit and the way he consistently would drag two or three defenders for extra yardage.

All of that led to 1,417 yards and 17 touchdowns rushing as the Trojans rolled up an average of 286 yards per game on the ground while making a little history. While the league championship was the first in 13 years, it had been 40 years since the Trojans won a playoff game.

That all changed Oct. 30 when Boulder City — which had defeated the Trojans 32-28 during the regular season — came to Pahrump for a second-round game. The Trojans rallied from a 10-point deficit during the second quarter behind 180 rushing yards from Velazquez, who also returned a kickoff 90 yards for a score, and held on for a thrilling 32-30 win.

“Ultimately, it comes down to Nico Velazquez,” Clayton said after the game. “He’s our guy. He’s so deceiving with his size. He’s not quick-footed, he just reads holes really, really well. And once he hits the hole, he can punish you to finish.”

Sign division: The Trojans girls volleyball team’s Pink Out match brought out the creativity. Along with the signs promoting breast cancer awareness was one that might well have been placed by a sneaky local business owner with a sharp eye for promotion: “If you want a soft serve, go to DQ.”

T-shirt division: Cross-country always will be a sport many people just won’t understand. Well, not so much the sport but the people who do it. After all, what would compel people to run that far that often with nobody chasing them?

The spirit that motivates such athletes brings out the best in T-shirts, and several good ones were seen at the Class 3A Southern Region meet in Boulder City. The best: “Our sport is your sport’s punishment.” “This seems like a lot of work for a free T-shirt.” “If I pass out, please pause my Garmin.”

Sure, it’s not entirely fair to compare sports. Some rely on individual efforts, some demand a lot of teamwork, and some only work best when a lot of teamwork is supplemented by one or two star players.

So it’s dangerous to try and pick one person from across all seven fall sports to single out for his or her accomplishments.

Unless you watched pretty much any of Pahrump Valley’s boys soccer games this fall.

Jose Chavez was simply a dominant force. There’s no other way to say it. Coach Chris Roberts said early this season that he detected more of an edge in Chavez this year, more of a killer instinct. The result was the kind of player who does the things that don’t show up on the stat sheet while simultaneously filling it up.

Playing bigger than his 5-11 frame, Chavez seemed to be in the middle of everything game in and game out. He scored a team-leading 33 goals — three times the number of second-leading scorer Fernando Martinez-Fontana — as the Trojans reached the playoffs for the first time in a decade. And if anyone is foolish enough to think Chavez is simply a ball hog, he also tied fellow senior Alvaro Garcia for the team lead in assists with 13.

And he came up big when it mattered most. Chavez scored both goals, one on a penalty kick, as the Trojans defeated Del Sol 2-1 on the last day of the regular season to clinch that elusive playoff berth.

“It’s been 10 years,” an emotional Chavez said after the game. “It means a lot. We finally get to go. I’m happy, my team is happy, our seniors are happy.”