Tom Rysinski/Pahrump Valley Times Officials conduct a high-level meeting to figure out what happened on a play near the Pahrump Valley goal line during the Trojans' 20-18 loss to Boulder City on Sept. 13 in Pahrump. 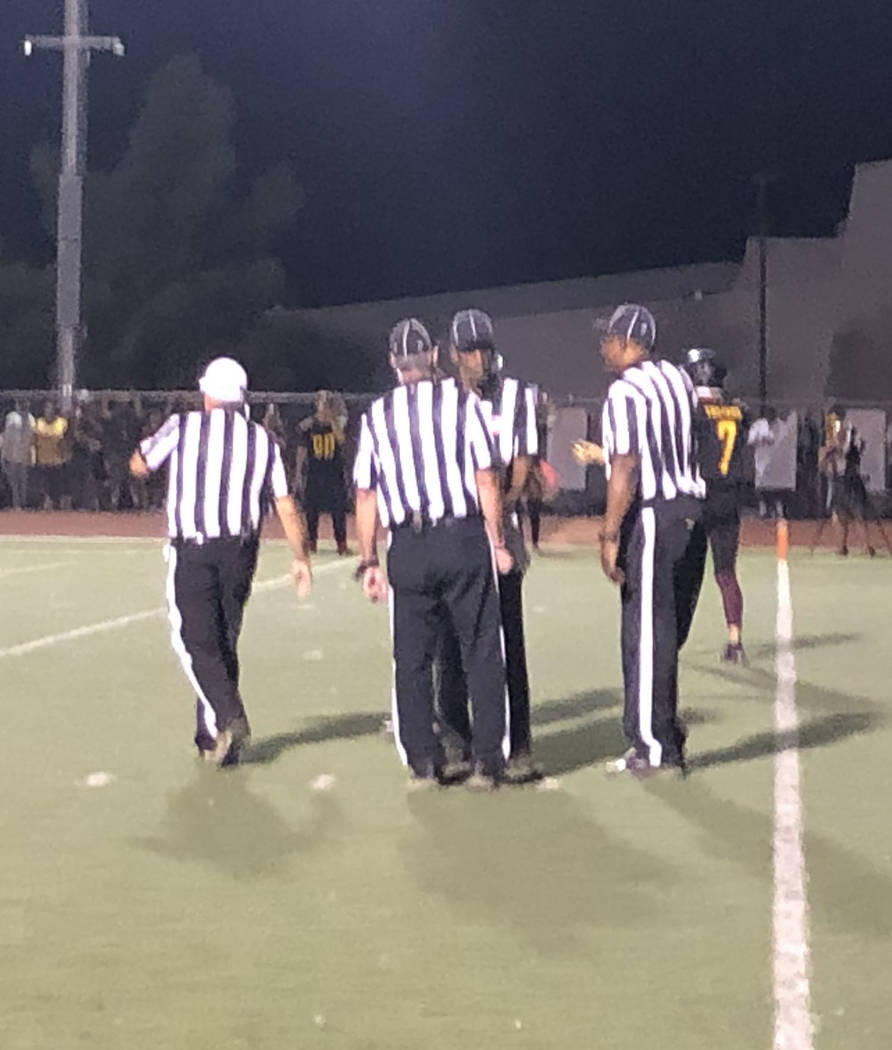 Tom Rysinski/Pahrump Valley Times The referee leaves a Politburo meeting as Pahrump Valley's Dylan Wright decides he has time for homework before the officials make a decision during the Trojans' game against Boulder City on Sept. 13 in Pahrump. 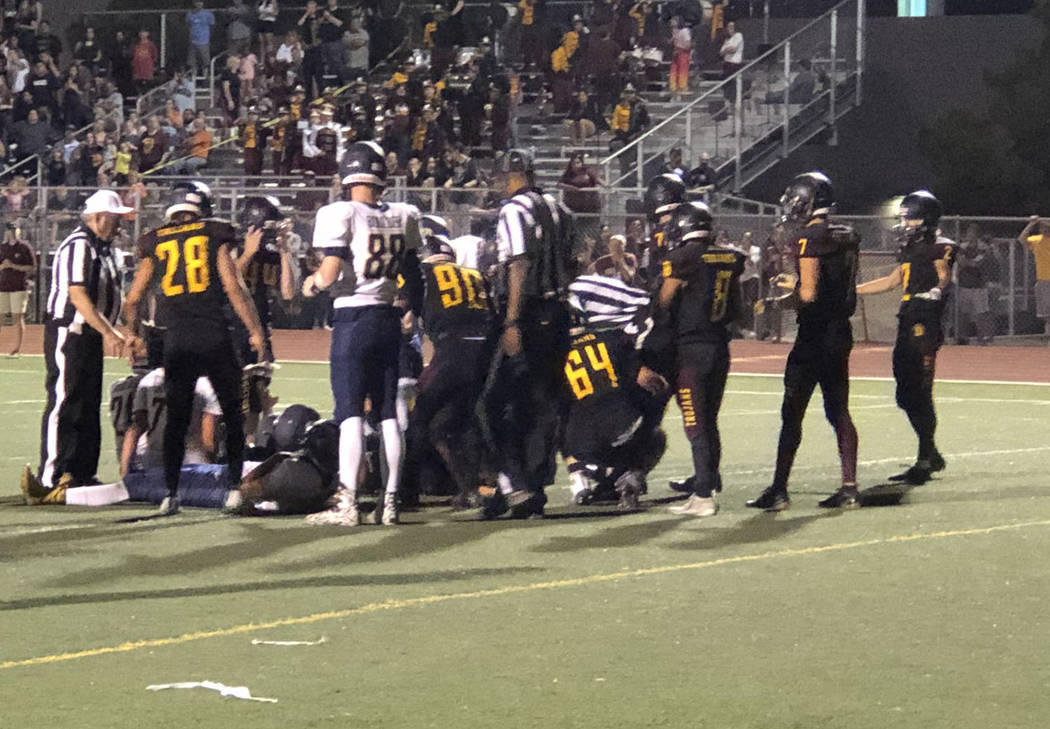 Criticizing officials who work high school games is not something I enjoy doing. They’re not making a fortune, they put up with a lot, and you really have to love doing it to devote so much time and energy to it. And in most sports there is a shortage of them. So criticizing them is usually inappropriate.

Then there was Friday night.

A mockery. A farce. A joke. A borderline disgrace. The officiating was that bad. Actually, it was worse, but the Oxford English Dictionary only lists 171,476 words and I can’t find one strong enough to describe the gross incompetence on display for all to see at Trojan Field.

I do not want to make this about age. Plenty of people in their 60s, 70s and 80s do useful work. Not in Washington, perhaps, but in a lot of other places. Some are even copy editors.

But the doddering referees who appeared to be finalists for the next Life Alert commercial looked, sounded and acted as if their best days were behind them. Actually, most spectators were left wondering if they had “best days” at all.

From the Trojans’ first drive, when the home sideline was incensed over what seemed to be phantom holding calls, right through overtime, when an Eagles player flabbergasted by a bizarre call was told to “settle down” by an official who had long lost the respect of those on the playing field, the referees dominated the game.

“I’m not one to complain about the refs, usually, but it was to the extreme,” Pahrump Valley coach Joe Clayton said after having three full days to calm down.

Be clear about one thing: This is not about one team or the other getting shafted by the zebras. Clayton called the officiating “not lopsided” but “atrocious” and noted that Boulder City coach Chris Morelli was in full agreement when they met after the game.

“The scary part is it was worse once we watched the film,” Clayton said. “It was worse than we thought. What was so disturbing to me was how they dictated the game. … We’re getting first downs and controlling the ball, and every three plays there’s a 10-yard holding penalty.

Then came the challenge of ineligible receivers. First, it was the Pahrump Valley side screaming that Boulder City junior Trey Davis was ineligible after catching a 13-yard pass from Parker Reynolds on the third play of the third quarter. Then, in overtime, the officials called the Eagles for having an ineligible receiver, causing the visitors sideline to erupt.

“When we saw film, two of their big pass plays that they got, the two kids who caught the ball were ineligible receivers,” Clayton said. “The guys up top noticed that the tight end was not eligible; they called it later, but they still missed another one. We confirmed that watching the film.”

One of the biggest things you must learn (unless, apparently, you are a parent in the stands or, in at least one instance, a Mountain View Christian coach during the Beatty game) is that the rules on Sundays are not the same as the rules on Saturdays, much less on Friday nights.

You ever notice wide receivers and refs talking and signaling to each other before a play? It’s the receiver making sure he is either on or off the line, depending on where he is supposed to be.

“I guess you probably need to have men in there that know the rules officiating a high school football game.”

And can see. And walk. Again, I don’t want to make this about age, but when you see officials looking as if they are about to fall over every time they cover more than 3 yards, it does not inspire confidence. I swear I heard bones creaking from about the middle of the third quarter.

Some silly calls did not affect the outcome, and many people didn’t notice them. For example, there was the non-touchdown touchdown Roman Roberts “scored” on third down during the first overtime.

As Roberts was stopped, with no hint from anyone else that a touchdown was scored, there they were: a pair of 127-year-old arms, inexplicably extended high in the air. Few saw him, but I did, which is why you are reading this right now.

Anyone who saw Methuselah make that signal had to wonder what game he was watching. Perhaps Washington State vs. Houston on his phone? Not likely, those rotary phones get really bad internet service.

On top of that, it took several minutes — TWICE!!! — for the League of Extraordinarily Unqualified Gentlemen to figure out exactly what happened on a play. And these were crucial calls: One was whether or not the Boulder City quarterback reached the end zone on a keeper on fourth down on the next-to-last play of regulation, and the other was whether or not there was a fumble on a play near the goal line in overtime. Or maybe it was who recovered the fumble.

I wasn’t going to ask. I figured one of them would yell at me to get off of his lawn. (Hey, I said I didn’t enjoy criticizing the officials; I didn’t say I wasn’t good at it.)

What could they have been talking about for so long? “You see a fumble?” “No, did you?” “I saw one, but I also saw Elvis at the Maverik on 160 before the game. You ever have those mini tacos?”

The teams combined for an astounding 26 penalties, with the Trojans hit for 87 yards and the Eagles for 100. Neither figure accurately reflects the rules violations that occurred.

“I voiced my displeasure after the game and told them they took this game away from our boys,” Clayton said. “They played so well offensively and defensively, and to have them dictate the game was really, really frustrating.”

The players will bounce back. You know about the attention span of teenagers, right? Sometimes it comes in handy.

But they won’t forget this one.