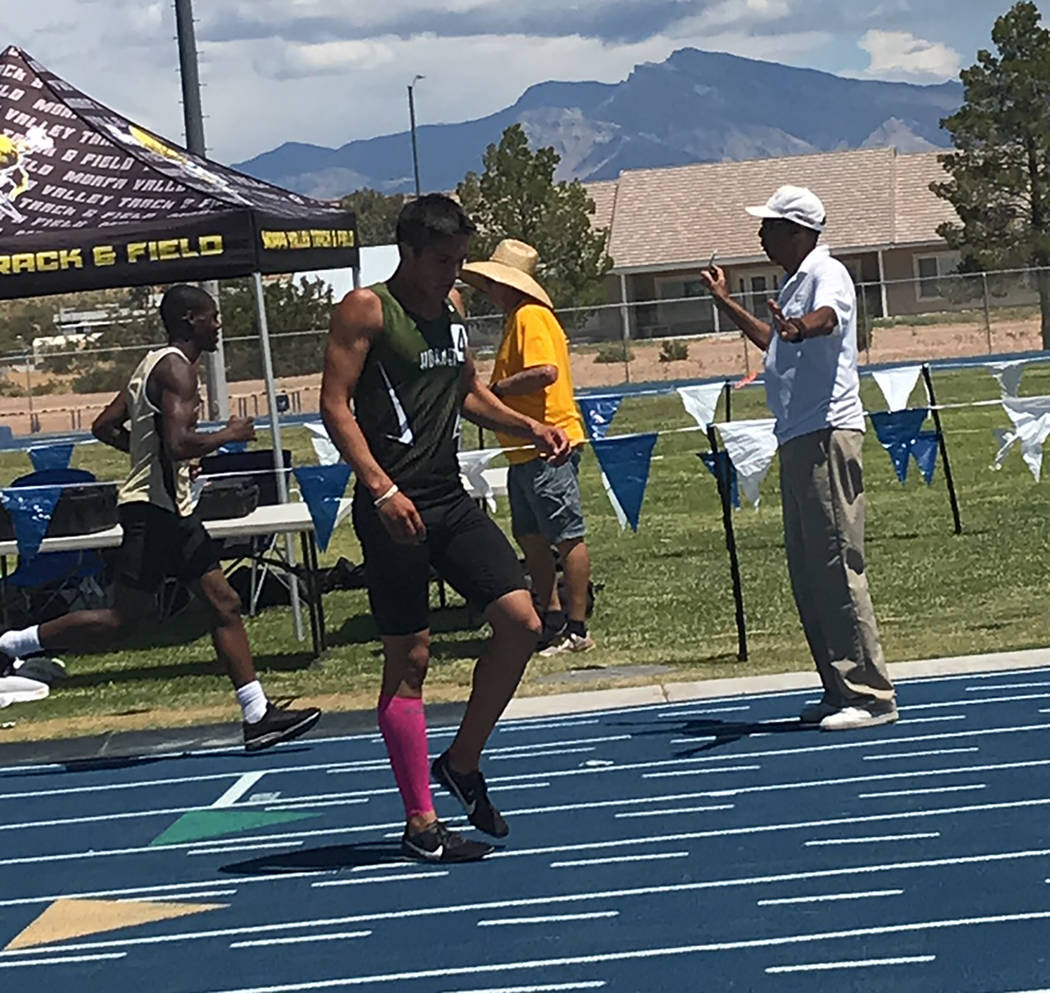 Ashley Anderson/Special to the Pahrump Valley Times Beatty junior Jose Granados winds down after completing one of his three record-setting performances at the Class 1A Southern Region Track and Field Championships in Overton. 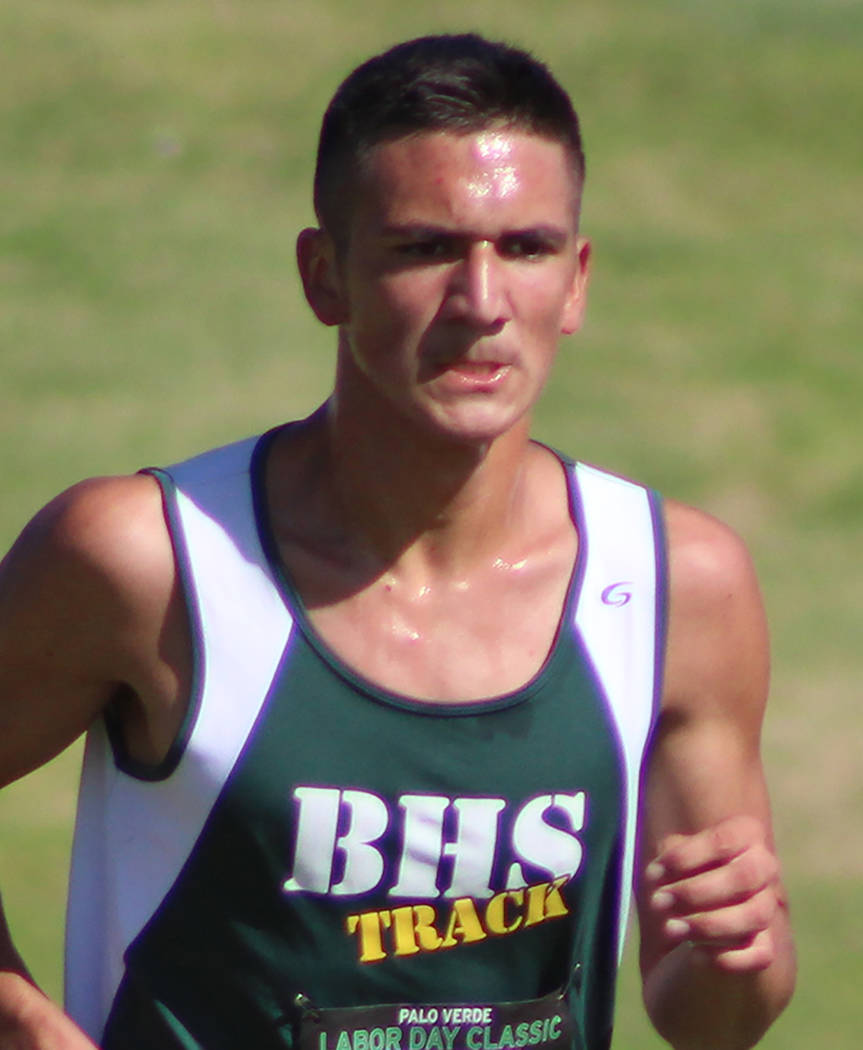 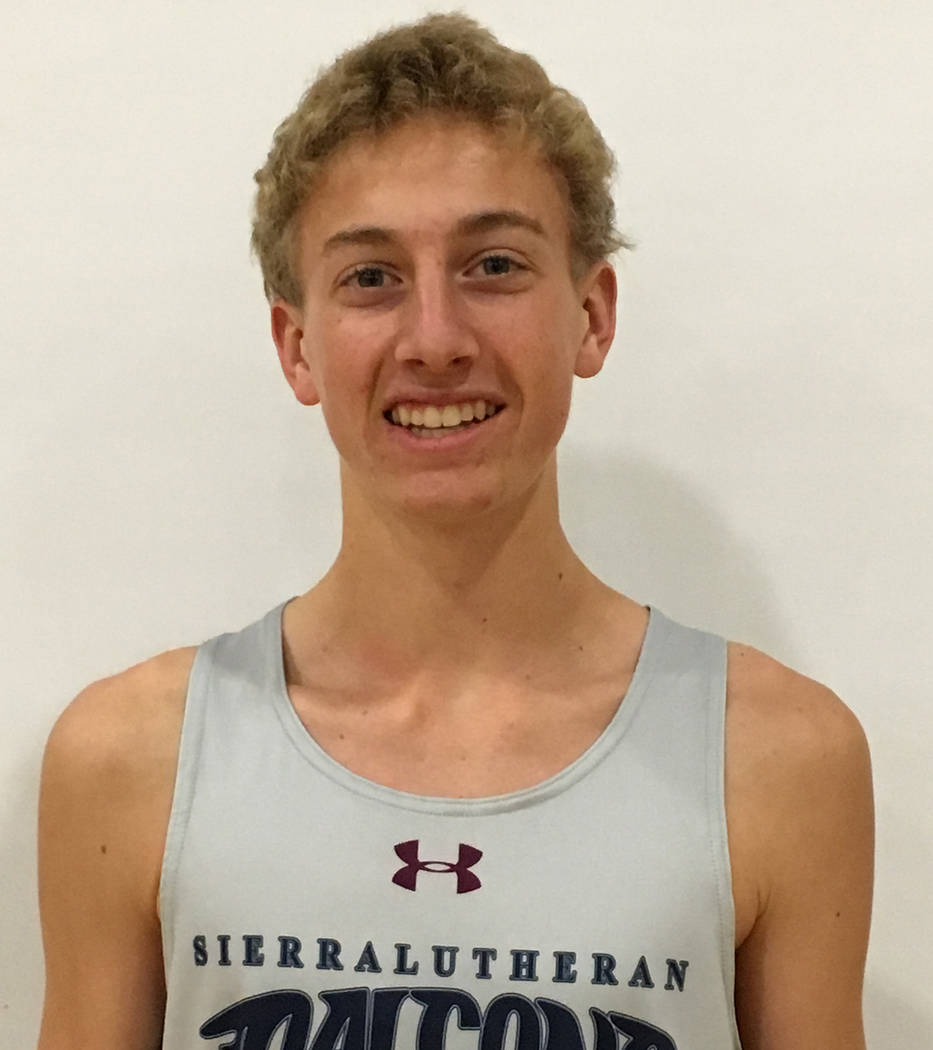 A state championship track meet is the ultimate example of organized chaos. There is a very specific schedule for each of the events in all four classifications, yet with so much happening at once it can be difficult to pin down exactly what’s going on.

But those who will be at Desert Oasis High School for this year’s championships would be well-advised to pay serious attention to the track at 8 p.m. today and again at noon Saturday, as one of the weekend’s most fascinating matchups features athletes from the smallest schools running the longest races.

Beatty junior Jose Granados and Sierra Lutheran senior Jared Marchegger waged three dramatic battles last season at the Class 1A championships, with Granados winning the 800 meters and 1,600 meters, each by less than a second, and Marchegger taking the 3,200, an event he has won in each of his three seasons.

They met again during the fall, when Granados decided to run cross country. Marchegger, who has won the Class 2A state title three times — 2A schools run with 1A schools in that sport — won the title at Veterans Park in Boulder City with Granados finishing third.

Marchegger is not running the 800 this year, except as part of the Falcons’ 4 x 800 relay, an event Granados also will run along with Alan Sandoval, Jovan Oseguera and Alfonso Sandoval for the Hornets. But for head-to-head drama, the 1,600 Friday night and the 3,200 Saturday afternoon will be a hot ticket.

Despite the high quality of the competition — and the fact the competition has won one of those races three years running — Granados said he will not be satisfied with anything less than a sweep of the three races. Then again, he wasn’t satisfied with his performance at the Southern Region Championships, even though he won the 800 (2 minutes, 1.03 seconds), the 1,600 (4:39.27) and 3,200 (10:29.03) in record times.

I respect a perfectionist as much as anyone, but that sounds almost insane. Not satisfied by setting region meet records in all three races? Doesn’t that put a little too much pressure on a person?

“Yes, but I just wait until I get to the starting line, and from there all of the nerves run out,” he said.

Still, expecting that kind of performance requires a lot of training, and Granados is known for his intense workouts.

“After cross country, I took maybe a week or two off, then throughout basketball season I’ve been training,” said Granados, who played basketball for the Hornets until this year, giving it up to devote more time to school and running. “I have a schedule of differing intensity. The highest has got to be a ladder that goes from 400 all the way to 800 or just speed workouts, adding a lot of sprints but high reps.”

That’s on top of regular track practice. In fact, Granados realized that he might have been working a bit too hard.

“At the beginning of the season I did, but I realized that’s probably too much,” he said. “The most I’ll do after practice is maybe a 2- or 3- mile, but that’s it.”

Run 2 or 3 miles. After track practice. But that’s all.

I do a mental victory lap when my car makes it 2 or 3 miles, with or without the check engine light.

Marchegger, who has signed with the University of Nevada, Reno, to be part of the Wolf Pack’s first men’s cross country season, won the Northern Region 1,600 in 4:44.84, 5 seconds off Granados’ pace in the Southern. For the 3,200, Marchegger and Granados were less than a second apart in winning region titles. But conditions were not identical, and the competition plays a role.

“It does depend on competition because depending on how fast they set the pace pretty much determines what my time is going to be,” Granados said. “If they’re going very slow, I guess I’ll have a slow time.”

Granados’ owns Class 1A’s best 800 time this spring, while Marchegger has the top times in the 1,600 and 3,200. Not only has Marchegger owned the 3,200 since he entered high school, Granados says that is his weakest of the three races.

“There are different strategies,” he explained. “The 800 is more of a get-it-out and then stay behind someone until the last lap, and from there on see who has the stronger kick.

“For the longer ones, for me, it’s setting my own pace and see if they can stick with you or stay with them and have them pull you around.”

The only other runner Granados gives much thought to is Marchegger’s junior teammate, Teagan Hansen. Last year, Hansen finished right behind Marchegger in the 1,600 and right behind Granados in the 3,200 while taking fifth in the 800. He also happens to be the runner who finished between the two at last fall’s cross country championship.

Hansen finished within a second of Marchegger in both the 1,600 and 3,200 at the Northern Region meet, showing that he might not be willing to wait until the older runner graduates to start winning titles.

As for contenders from the South, the same runner, Spring Mountain sophomore Charles Ross, finished second to Granados in all three distance races at the region meet. But the gaps, almost 13 seconds in the 800, 38 seconds in the 1,600 and 32 seconds on the 3,200, suggest he won’t be a major factor this weekend.

“I think all three races are going to come down to who has the most guts,” Granados said.

Tom Rysinski is sports editor of the Pahrump Valley Times.