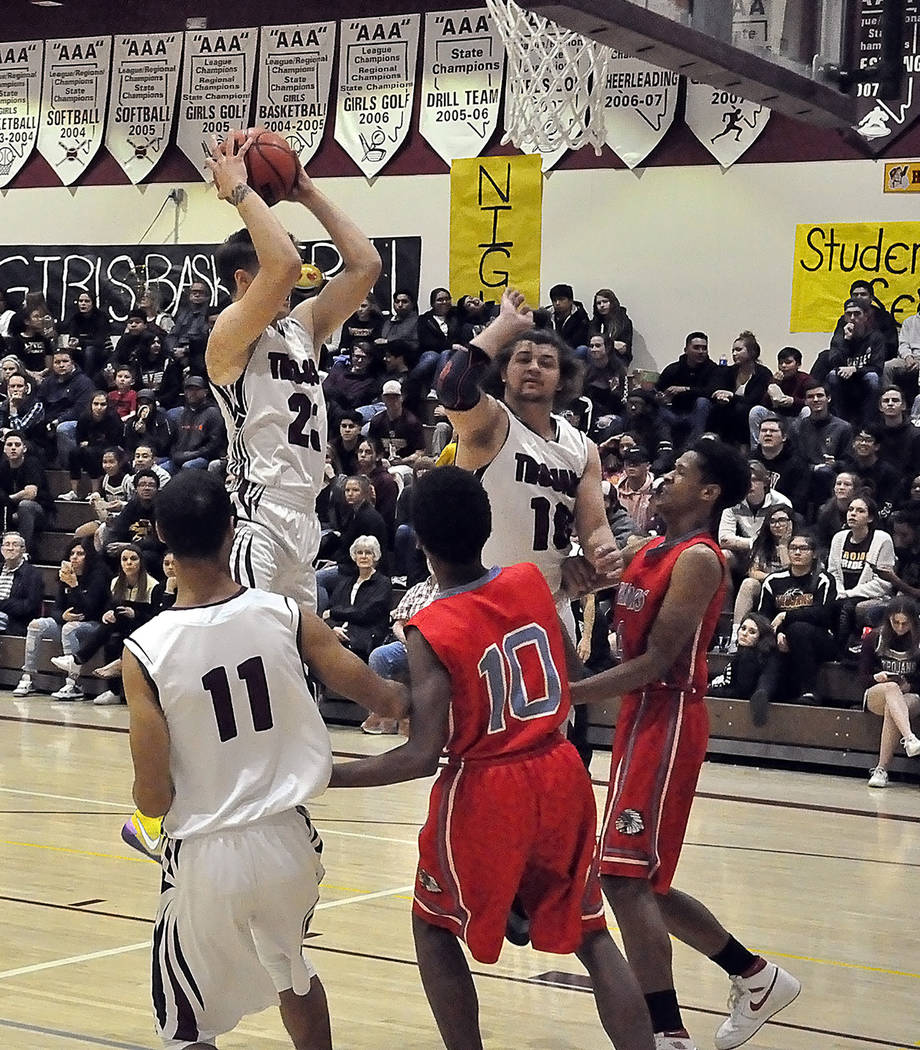 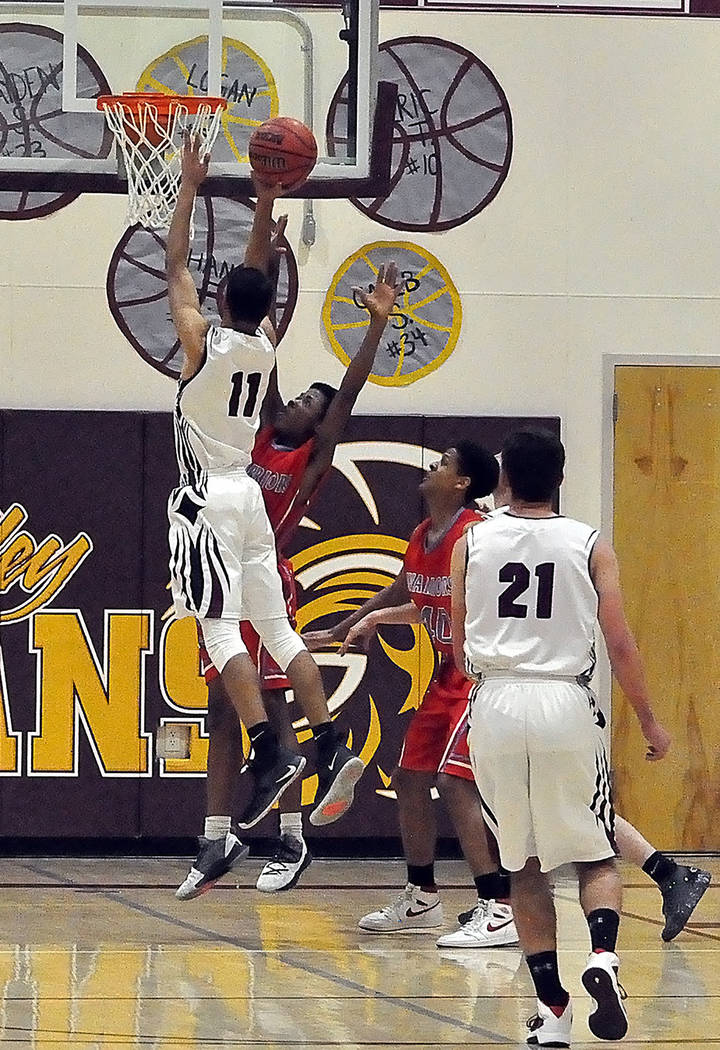 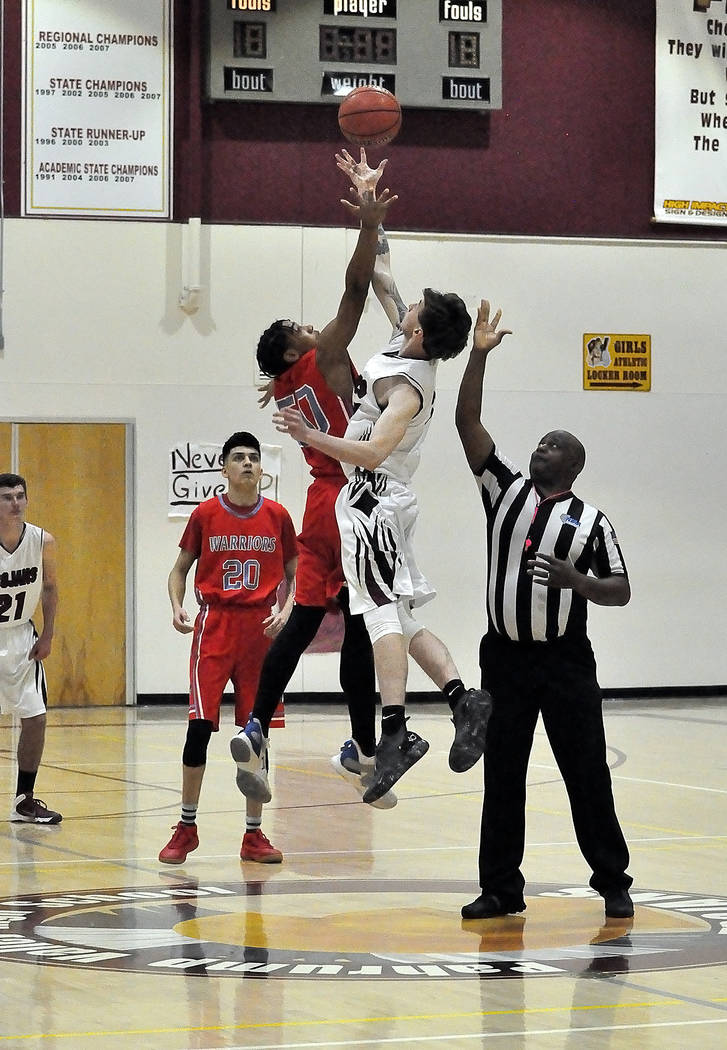 They went into the game with a 5-18 record, 0-8 in league play. Those are depressingly familiar numbers around the Pahrump Valley High School boys basketball program, for the same demographics and socio-economic factors that help create little league competition for the baseball, softball, golf, girls soccer, girls volleyball and girls basketball teams create a murderer’s row of opponents during boys basketball season.

The Trojans have not won more than one league game since 2009-10, when they were in the Class 4A Southwest League. None of their 10 playoff appearances has come since any current player was past first grade. Since that 2008 playoff appearance, they have gone winless in their league three times and have seven seasons of 20 or more losses.

With Western coming in for the home finale, there was little reason to believe things would be any different. While the Warriors were nothing special at 6-17 overall and 3-5 in the Sunset League, the Warriors had routed the Trojans 57-25 in their first meeting Jan. 16 in Las Vegas.

“The first time we had Chance (Farnsworth) out, and they beat us by 30 or so at their place,” Pahrump Valley coach Dan Clift recalled. “But those kids knew that we could play with them. They weren’t a team that was overly aggressive in terms of pressuring the ball. They knew traditionally in the past that’s one of the teams we can compete against and have competed against.

“It was Senior Night, and this was the time to go get one.”

Despite the lopsided outcome the first time around, the Trojans brought some confidence into the Western game, and the large Senior Night crowd certainly helped.

That was the sentiment shared by three of the seniors as they watched the girls basketball team clinch another Sunset League title by beating Mojave last week.

“We were very confident,” said Brayden Severt, who merely led the Trojans with 22 points, sent the game into overtime with a last-second 3-pointer and scored all 7 of his team’s points in the extra session. “Because we played them before, and the first time we played them we had a chance. But we just got tired like usual. This time it was different because it was Senior Night, and we really wanted to win this game.”

“I thought we had a chance,” agreed Ethan Whittle. “I think we have a chance going into every game.”

“I wasn’t particularly sure how it was going to play out, because I was gone for the first game for personal reasons,” Farnsworth said. “But we had it in our mind we could beat them. They weren’t anything too special, but they were a tough team.

“It was Senior Night for us, so we really wanted to go out and give it our all. We had great teamwork the whole time, probably the best teamwork we had in any game.”

Western is an old-school type of team. Coach Rudy Johnson runs a tight ship and prefers solid half-court execution on both ends of the floor.

“He doesn’t want them reaching; he wants them to move their feet,” said Clift, who said he has a great deal of respect for Johnson. “He’s got talent on that team, but he wants them to be disciplined. His philosophy is he wants to run a half-court offense and be solid in those sets.”

So while the Mojaves and the Democracy Preps press opponents all over the floor and give the Trojans fits in the process, the Warriors are content to play solid defense and run a disciplined offense.

“At halftime it was 23-23,” Clift said. “It was close the whole way. They let us bring the ball up the floor without too much pressure, and we were able to get into the half-court offense and we were able to do the things offensively that we wanted to do without being pressed like crazy.”

“I don’t think it was much about their defense, we just know the offense better now than we did when we first played them,” Severt said. “We knew how to move the ball around to open spots.”

When you can’t get the ball over midcourt without throwing it away, that doesn’t matter much.

Given the chance to get into their sets against Western, the Trojans took advantage and ran their offense the way it was meant to be run. Keep in mind that despite having several seniors, the Trojans did not bring a lot of experience into the season.

“I think we got a lot out of these kids,” Clift said. “I had three kids that played varsity basketball. Chance probably played half the minutes he got this year as a junior, and Brayden and Grant (Odegard) played as many minutes as I could get them on the floor, but the other six guys had not played varsity before.”

Clift points to Garrett Ward as an example of the kind of player he has on the roster. “He played on the JV last year as a junior, and then he comes out and starts 12 to 15 games for us as a senior and does a heck of a job. That’s the kind of team I had. Just a great group of kids, and that made it as much fun as you can have with the record we had. It was good.”

Senior Night is a ritual that happens several times a year as each varsity team reaches its last home game. Parents come out, usually there are flowers, often a lame speech or two, and then the game goes on as if nothing ever happened.

The crowd was larger than usual, obviously so. The competitiveness of the game kept the larger crowd involved. And the players noticed.

“The crowd definitely helped us,” said Severt, the team’s leading scorer for the season at more than 11 points per game.

“If we would have more people in our crowd to hype us, to give us a motivation boost you could say, a morale boost, I think we would have won a lot more home games,” Farnsworth said. “I’d say there are four or five games that we lost at home by less than 5 or so.”

But it’s not just the stands that don’t have enough bodies. Pahrump might not be a basketball town, but you have to believe a better history on the court might lead to more kids wanting to play.

“I think it’s hard for some of those kids to want to participate in basketball because the challenge is so much different than it is on the baseball field or the softball field,” Clift said. “Kids want to belong to something that has success. Kids don’t want to be in the situation where they go to school the next day after they got beat by 35 by Del Sol.”

Celebrating when you can

The closing moments of regulation against Western were pretty crazy but very clear in Clift’s memory.

“One of their kids had a chance to put it away and he tried to dunk it, and he missed it,” he recalled. “We had to go the full length of the court down 3, and Brayden comes down, 5.6 seconds left, and I didn’t think we could dribble the ball up the floor. So I wanted to make one long pass. We threw it in to Koby (Lindberg) at the top of the key, who threw it right back to Brayden, who shot somewhere about 25 feet. And he was defended. Brayden went by him and shot it and put us into overtime.

“That was a great way for Brayden to finish. … He scored all of our points in overtime. We don’t give up a bucket in OT. They go 3 for 4 from the line and we beat them by four.

“Brayden refused to let us lose.”

“That game I had 16 points,” Farnsworth said. “I ended up fouling out at the end of the fourth, and Brayden had to take over, and he did. Luckily, he stepped up to the plate.”

“Those are games I don’t get to coach that much, and you don’t want to make that coaching mistake that will hurt your kids,” Clift added. “I was trying really hard not to forget to do something that will help us get this win.”

Clift, who acknowledges it can be challenging to keep kids engaged during a tough season, said this particular team deserved to enjoy its big night.

“Best group ever. Hands down,” he said. “That’s easy to say because there’s no worries here. Kids are going to come to practice, there are going to be no behavior problems, academics, no issues in the community. I worry about turning the ball over; I don’t worry about is this player not going to be eligible or get into a fight and be suspended. I didn’t have a selfish kid.”

The record will say 6-19, 1-9 in the Sunset. Another year of not making the region tournament, a drought that now runs 11 seasons.

But for one special night, the Pahrump Valley boys basketball players were winners. And they will keep that memory alive in their minds for far longer than any of those 19 losses.