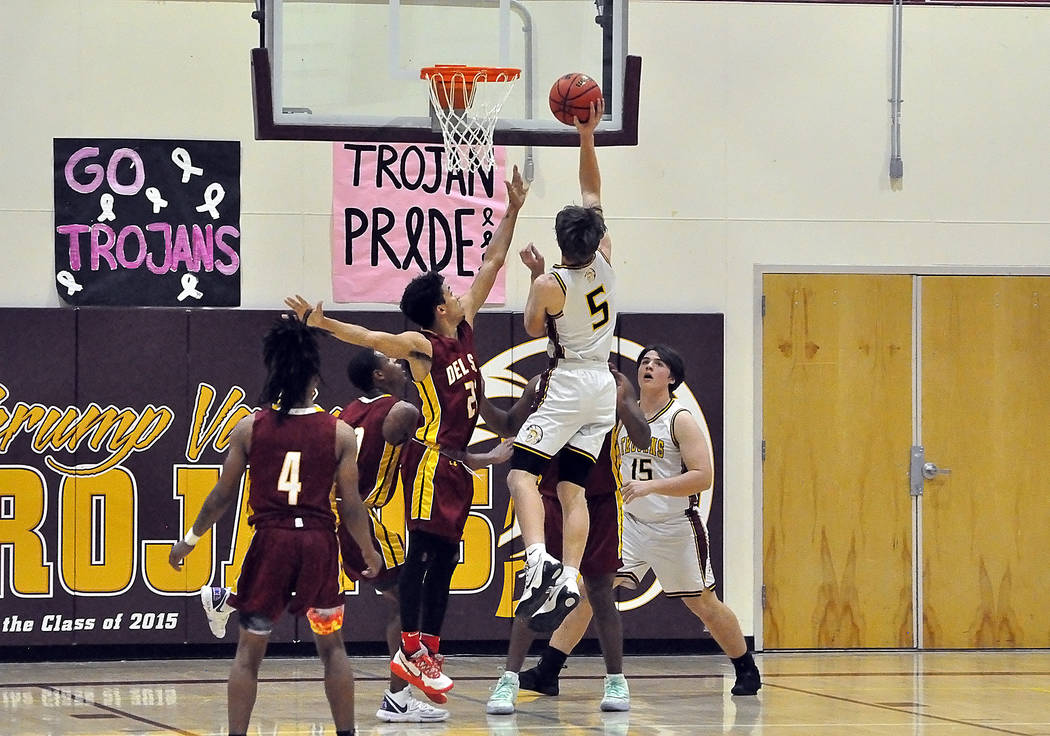 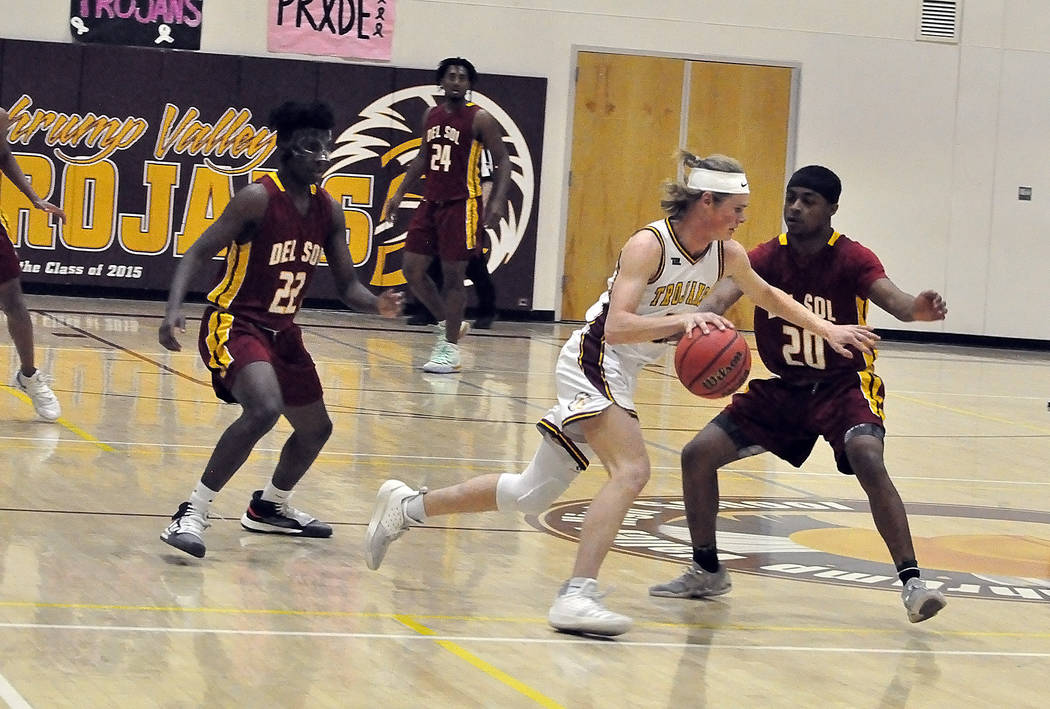 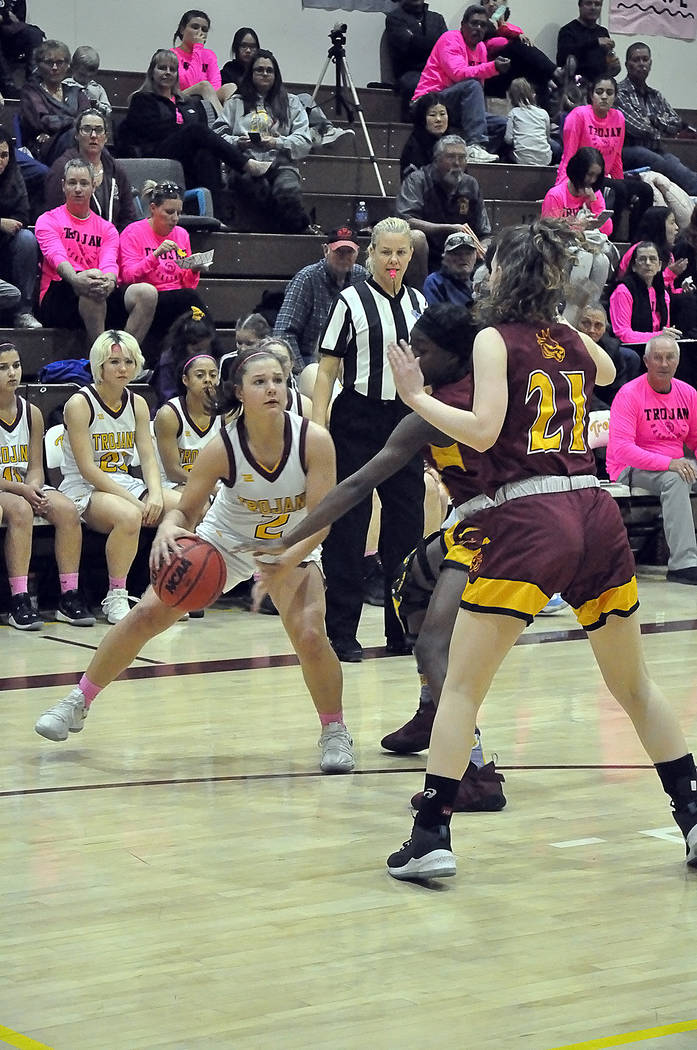 Full disclosure: I had no intention of talking to either coach after Tuesday night’s basketball doubleheader at Pahrump Valley High School.

On paper, it sure looked like a normal night in the Sunset League, with the girls team making a joke out of the opening game and the boys team suffering a one-sided defeat.

Plus, the games were at night and I had to be back at the school at 7 a.m. the next morning for signing day, one of the best days of the year. So I wanted to flee ASAP from the gym Tuesday night.

And I did. But after what I saw Tuesday night during the Trojans’ 70-61 loss to Del Sol, I had to call boys coach Dan Clift the next day to ask about it.

What the Trojans did against the Dragons was not just put forth a terrific effort, not just play well against a superior team — actually, they were kind of sloppy, but so were the Dragons — but go toe to toe against a vastly more athletic team for almost the entire 32 minutes. Save for the opening minutes of the third quarter, the teams were basically dead even.

“It was fun,” Clift said. “They were all clapping afterward, and I thought this was good. We get beat, but there were smiles.

“Grant (Odegard) comes in after the game and says, ‘That’s the team that beats everybody in our league by 10.’ ”

Let’s face it. Boys basketball games, especially when league play comes around, can be tough to get through. The Trojans will look good for a while, but the opposing teams are almost always quicker with a few guys who can leap out of the gym. They will press the Trojans, and it’s only a matter of time.

“We can’t afford to come out and have a quarter where we score 4 or 6 points,” Clift said. “We’re notorious for that. We’ll go score 17, 18 points and then turn around and score 3 the next quarter with the same kids on the floor.”

The difference in the game was the stretch just after halftime, when everyone in the building knew the Dragons would be angry about ending the first half with a precarious 33-31 lead and come out with greater intensity. Indeed, the Dragons came out guns blazing, scoring 16 consecutive points over a span of 4 minutes, 34 seconds.

“I called two or three timeouts in that third quarter because I knew they were on a run, we hadn’t scored, and we’re getting tired,” Clift said.

By the time Odegard nailed one of his six 3-pointers, it was 49-34, and the Trojans looked dead.

The way Odegard came to hit that 3 was a hint that the Trojans would not go away meekly. Rob Simms, who played a career-high 12 minutes in his seventh varsity game, missed a 3-pointer from just to the right of the top of the key. The rebound went far to the left, but Simms chased it down and got the ball to Odegard, who shot 50 percent from downtown on his way to a game-high 26 points.

“After Andrew (Avena) was out with the injury and Koby (Lindberg) was out with the concussion, I told (Simms) you’re going to play JV and on varsity we’ll get you in. If you had told me a kid like Rob Simms would play 12 minutes in a game like that … but he took care of the ball and did a good job.

“We need a lot of kids like Rob Simms and Chris Briscoe and Dylan Severt to step up and be better basketball players.”

Those young guys each have shown signs this season of doing just that.

“We’ve got Dylan playing some JV basketball, some varsity,” Clift said. “We’re going to play 26 games, and he’s going to play somewhere around 40 games. And that’s why you’re seeing such growth from him. Chris Briscoe, Rob Simms, they’re also getting stronger.”

Right now, this team needs its more experienced players to come through as they did Tuesday night. Junior Logan Gavenda poured in 16 points — 8 of them during the first quarter, which ended with the Trojans leading 19-17 — and grabbed 6 rebounds. Combining with Odegard for 42 points gave them double what they produced during the first game against the Dragons.

Odegard caught fire after the Dragons’ scoring run, nailing 5 of his 6 3-pointers and scoring 17 of his 26 points after halftime. The senior guard was at his best when he just casually came up the floor and launched a 3-pointer, and while quick shots are usually the last thing Clift wants, on this night he went with it.

“I told those kids last night, shoot the ball. shoot the ball every time you have it,” Clift said. “They were giving us the high post, so throw it in and throw it right back to Grant. Grant’s eyes kind of lit up. We’re down 10 points and we can’t be trading 2s for 2s.

“He was smiling because I said there’s no control. Shoot the ball every time you have it. And he did that, and he did that well.”

The free throw shooting wasn’t good, and with the teams combining for 60 free throws, a better performance there could have made a difference. But the Trojans managed just 11 of 25, while the Dragons hit only 17 of 35.

Two 3-pointers by Odegard sandwiching two 1-for-2 trips to the line for Del Sol pulled the home team within 5 points at 63-58, and they were within 5 again after Severt’s driving layup while falling with 49 seconds remaining.

But that was it for the Trojans’ scoring until a free throw with less than a second left, but when the final horn sounded neither the Trojans nor their fans appeared disappointed.

Look, nobody wants to be 6-17, and if wasn’t for Equipo Academy joining the Sunset League the Trojans would be winless in the league. The tremendous effort aside, the cold, hard fact is Pahrump Valley has only three more chances to get the kind of victory they enjoyed near the end of last season, when an overtime win over Western on Senior Night made their season and prevented a winless league record.

“Every year I’ve been here, we beat someone we shouldn’t have beaten,” Clift said. “We beat Sunrise Mountain my first year, we beat Western last year. We have three games left, and we have to do that.”

The Trojans might or might not reverse any of those scores and get that win Clift says they need. Either way, I would suggest watching them try to get it in person. Because despite the record, this team can be fun to watch, and there’s not much time left to see for yourself.