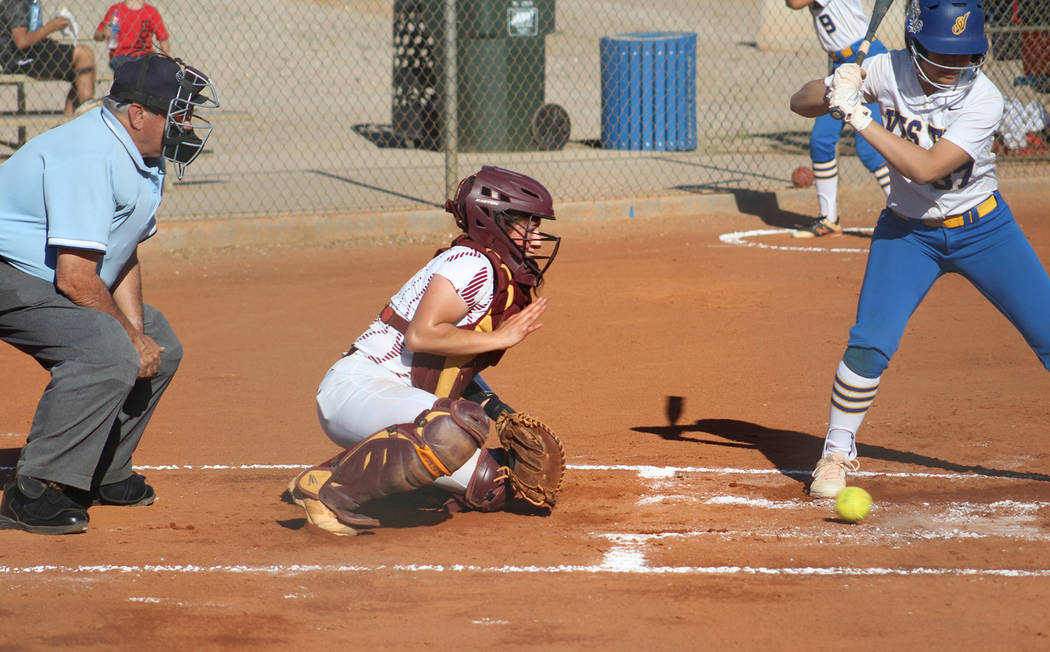 Cassondra Lauver/Special to the Pahrump Valley Times Senior catcher McKayla Bartley goes low to block a ball in the dirt during Pahrump Valley's game Saturday against Sierra Vista at the Colorado River Invitational in Needles, California. 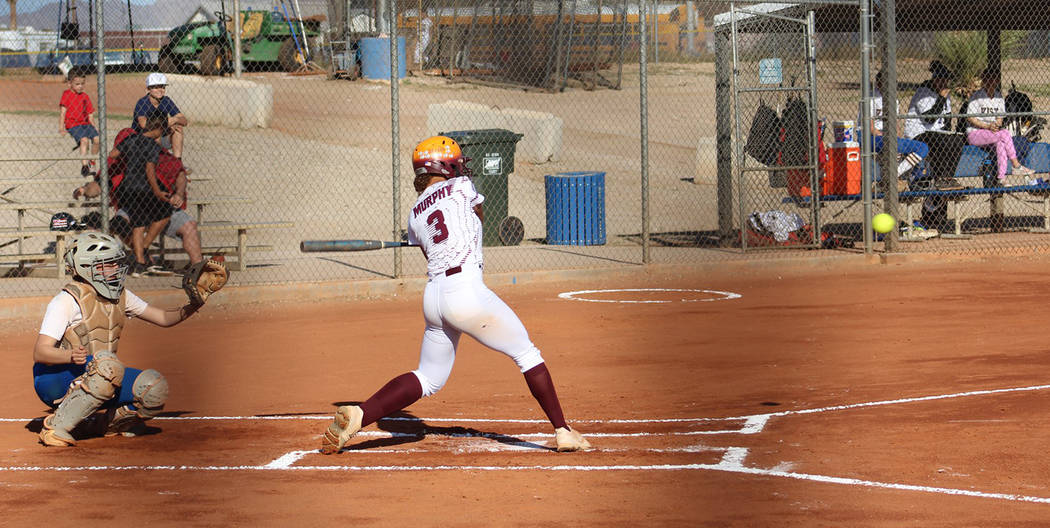 Cassondra Lauver/Special to the Pahrump Valley Times Ashliegh Murphy keeps her eye on the ball during Pahrump Valley's Colorado River Invitational game against Sierra Vista on Saturday in Needles, California. 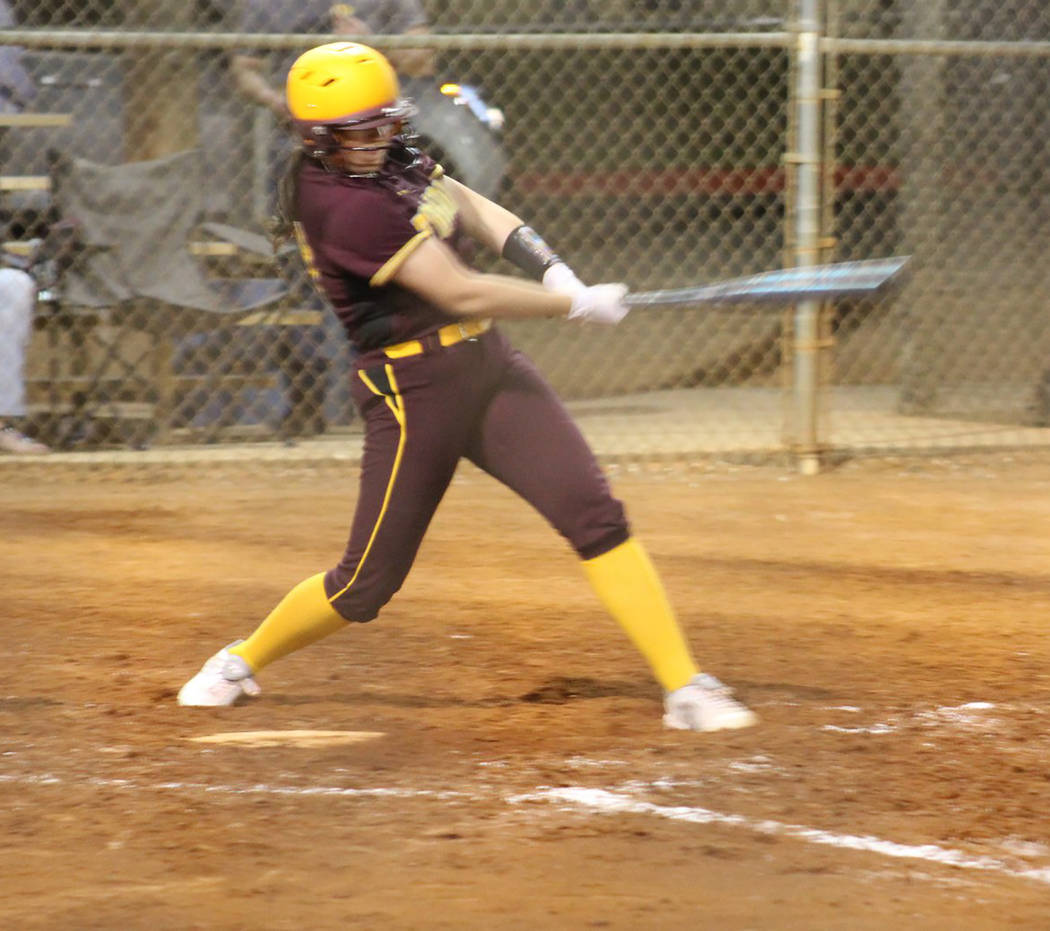 Even stranger, it kind of makes sense.

But first, an explanation is in order for the eliminated-four-times thing, and half of the reason is that Pahrump Valley sent two teams to the tournament.

“We kept all of the seniors on one team, and then just filled spots in where there were no seniors,” Lauver explained. “The other team we put together strong players and filled in spots there as well.

“We feel like we have two very competitive teams that we can put together, and we wanted to give opportunities to people to be in big moments like this, see what we’ve got going before we put something great together.”

“Something great” definitely was not found in the results from the tournament. The senior-dominated group was winless, while the “other” team won one game in pool play and won another Saturday morning in what best could be called the “second-chance” round.

This is where the eliminated-four-times part comes in.

The tournament included several teams from California schools, and they got caught up in a rule change.

“I guess there’s a new rule in California where when they play a tournament they max out at five games,” Lauver said. “They can’t play any more or it counts against their game count.”

That would require canceling games already scheduled for later in the year, and it’s just plain easier to skip town a day early than deal with that.

In any event, despite both Pahrump Valley teams losing in the first round of bracket play — making the seniors 0-4 and the unseniors 1-3 at the end of the first two days, both teams were there at 8 a.m. Saturday morning for the quarterfinals. And while the seniors were eliminated — again — by a 9-1 count against Sierra Vista, the unseniors posted their second win, beating Holbrook as Allyson Rily struck out eight.

Sierra Vista then eliminated Pahrump Valley for the second time that day, beating the unseniors 13-2 in a game halted during the third inning by the mercy rule.

So why was this a productive weekend again?

Well, for one thing, dividing the roster into two teams meant that each one was literally playing with one hand tied behind its back. As talented as the seniors on this team are, they aren’t the only ones who can play. So the record was going to take a beating, but twice as many players were going to get to play.

For another, these weren’t games against the mind-bogglingly god-awful teams the Trojans will see in the Sunset League, where they will take a 30-game streak of mercy-rule wins into the March 31 league opener at Mojave. Assistant coach Rich Lauver estimated that all but two of the teams the Trojans faced were “really good varsity teams.”

And of course, it’s the first week of March, and it isn’t necessarily about wins and losses — at least not yet.

“It’s just to see what positions we have strength in, where we’re trying to build depth and grow a lot,” Lauver said.

That doesn’t mean Lauver is oblivious to the string of defeats suffered by her most experienced players.

“Our senior team had a lot of soul-searching to do this weekend,” she said. “In this very last game things started to spark with them, and they started making adjustments and better decisions.”

That would have been the 16-5 loss to Silverado that eliminated the seniors, for the first time, anyway. The Trojans trailed 13-0 after the first inning and were three batters into the second before they seemed to wake up. An infield error opened the door, and the Trojans barged through it, putting together a five-run, two-out rally featuring RBI singles by Hannah Cuellar, Skyler Lauver and McKayla Bartley.

And there were some bright spots on the pitching staff as well.

When we last left this team, “struggle” was not in the vocabulary. They steamrolled through the Sunset League and then went undefeated in the postseason to win 3A region and state titles. But May 2019 was a long time ago.

“We talked to the girls a lot about how last season was awesome, but we can’t live in the past,” Lauver said. “We have to look forward, and there’s still work to do.”

The work began early this season, and as tough as it might have been to lose that many games that quickly, they seemed to understand that they sacrificed a meaningless early-season won-loss record to build their program.

“Two teams was tough, but I’m glad we did it,” Lauver said. “It has been a great experience for the younger girls and has allowed the older ones to push themselves and build endurance. Both groups fought hard and battled through some adversity. It would be hard to believe that any other program got their players this much high-caliber competition this weekend. We are all exhausted.”