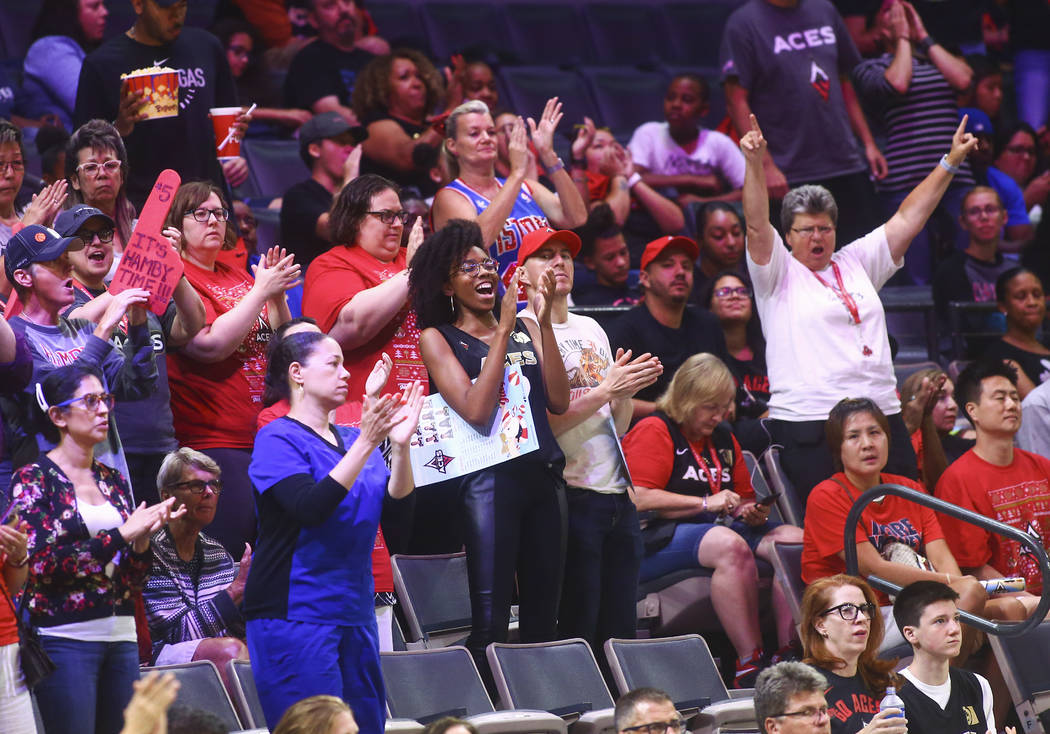 Chase Stevens/Las Vegas Review-Journal Las Vegas Aces fans cheer during the second half of a WNBA game July 23 at the Mandalay Bay Events Center in Las Vegas. The Aces averaged 5,208 fans per game during their first season in Las Vegas, lower than all but one of their previous 21 seasons in Salt Lake City and San Antonio. 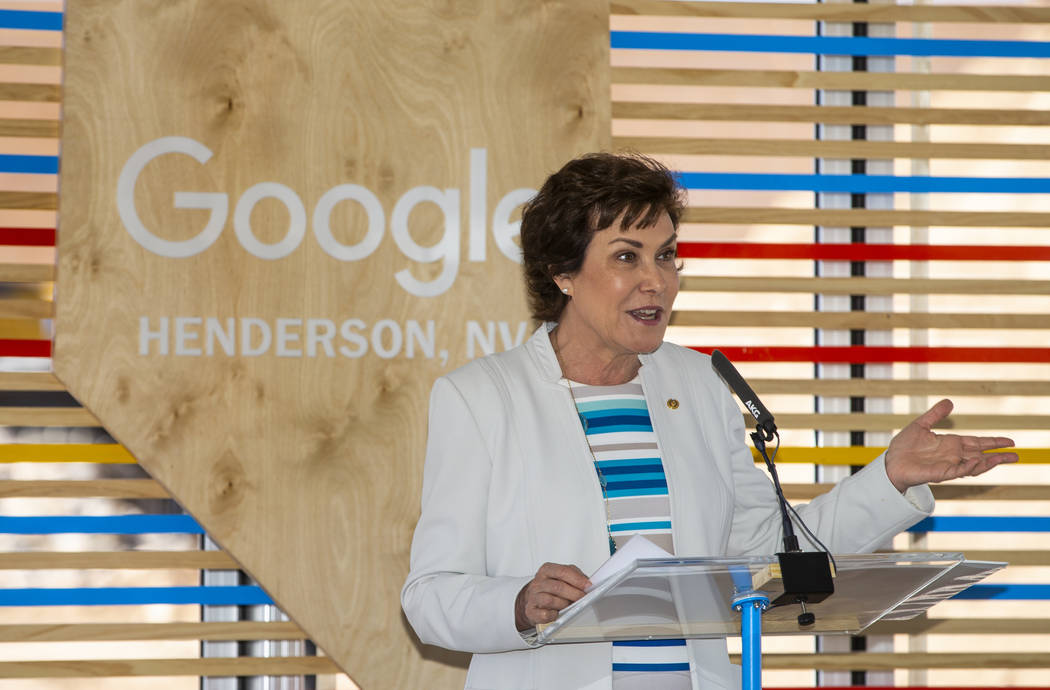 Almost invariably, politicians sound foolish when they wander into sports. They seldom know the context of the issues and certainly don’t know much about the background of the situations, and they just seem out of touch when they chime in.

That didn’t stop Nevada’s Jacky Rosen, who, along with Senate colleague Amy Klobuchar of Minnesota, apparently thinks it will take a committee hearing to learn why NBA players get paid more than WNBA players.

It made big news recently when it was revealed members of the U.S. Women’s National Team in soccer get paid less than the men’s team, and apparently a similar problem exists in ice hockey. A lawsuit has been filed on the matter, and that suit should be allowed to proceed and, hopefully, settle the issue.

But that’s not enough for the senators, who recently sent a letter to the chairman of the Senate Committee on Commerce, Science and Transportation asking for hearings on the subject of gender pay equity in professional sports, going well beyond the soccer and hockey national teams and specifically mentioning the NBA and the WNBA, among others.

It shouldn’t take much more than public pressure to resolve the soccer and hockey situations — which have nothing to do with how successful the women’s soccer team is nor how utterly classless some players were during and after the World Cup — and if not, that lawsuit will do the trick. And if they need a Senate hearing on why players in the NBA and WNBA don’t get paid the same, the republic is in more trouble than we thought.

Last year in the Women’s National Basketball Association, the maximum veteran player salary was $115,500, while the men in the National Basketball Association earned a minimum salary of $582,180. Despite four Grand Slam tennis tournaments in which men and women players are compensated equally, women tennis players are only earning 80 cents on each dollar that men earn in other matches. Although the Ladies Professional Golf Association this year will distribute a record of roughly $70 million in prize money, this is only close to one-fifth what the men will receive from the Professional Golf Association Tour.

But, politics aside, this nonsense requires a response.

Novak Djokovic needed five sets to outlast Roger Federer in an epic Wimbledon final, while Simona Halep dispatched Serena Williams in a matter of minutes. They got paid the same.

It’s fair because they all generate revenue. The majors are among the very few tournaments in which men and women play under the same umbrella; otherwise the tours are run separately. So at the majors there is no separation of revenue, and people pay to watch both genders.

So let’s apply the same concept to the NBA and WNBA. Paying them equally would be monstrously, outrageously laughably unfair. What kind of simpleton needs help figuring this out? Not one minute of the public’s time and money needs to be spent investigating this. Tell one of your staffers to get off of Match.com and do a couple of quick Google searches and you’ll be all set.

That’s what I did. The Google searches, I mean.

The NBA’s last TV contract was a nine-year deal with ESPN and TNT signed in 2014 and worth $24 billion dollars, more than $2.6 billion per year. That’s billion with a “b.” The average NBA franchise is worth $1.65 billion as of 2018, more than triple what it was just five years earlier.

Meanwhile, terms of the WNBA’s deal with CBS Sports Network, best known for carrying such high-profile fare as Conference USA football, Patriot League basketball and World Team Tennis, were not announced. The other part of the TV rights belongs to ESPN, which pays the WNBA a whopping $25 million per year.

Got that? The same network whose share of NBA broadcasts is worth well more than $1 billion a year pays $25 million a year for the WNBA. In the big-money world of TV sports, that’s dumpster diving.

Senator, how much more do you need to know? And how many staffers need to spend how many more hours developing questions for expert witnesses to figure it out?

To save time, I’m here to help.

The Philadelphia 76ers led the NBA in attendance this past season, averaging 20,441 fans per game. Sixteen teams averaged more than 18,000 fans. The team with the worst attendance, the Brooklyn Nets, drew 14,941.

As for the WNBA? Its peak attendance year was 1998, when it averaged 10,864 fans per game. I could stop there, but let’s be very clear: In its best attendance season — 21 years ago — the WNBA averaged more than 4,000 fewer fans than the NBA team with the worst attendance last year.

Throw in the fact that NBA players play 82 games plus a very long playoff system, while WNBA players play 34 games and a very abbreviated playoff season, that includes one-game playoffs. And the WNBA lost $12 million last season, par for the course over its history. A pro sports league routinely loses money, and a couple of know-nothing senators wonder why its players don’t get paid more?

It’s not like there’s a group of businessmen around a table in a small room with a big bag of money, liberally throwing cash at Kevin Durant and Anthony Davis just because they’re men and prying open their dusty wallets to drop a couple of coins in the hat on the sidewalk where Maya Moore and Diana Taurasi are playing saxophones for tourists. Far fewer fans paying far less money to watch far fewer games is pretty basic information to grasp.

You might as well ask why Major League Baseball and Major League Lacrosse players don’t get paid the same. They sound the same, don’t they?

You can’t force people to watch something they don’t want to watch. And you can’t force the leagues or the pro tours to take less money from sponsors or the networks so they will cut salaries and prize money and pay what the women’s leagues and tours are able to afford.

Sen. Rosen, are you going to try and force the NBA and WNBA to operate as a single entity? Force the men’s and women’s golf and tennis tours to merge, so they will have to pay men and women equally? Great idea. You know what happens when a big corporation has an underperforming unit?

In high school and college, gender equity is absolutely vital. A university cannot morally or ethically decide it’s just fine to offer 234 scholarships for men’s sports and 32 for women’s sports. A high school can’t allow a boys team to have fancy locker rooms (OK, pretty unlikely, maybe at Gorman or Faith Lutheran) while the girls have to use a restroom in the hallway near the gym.

And if anything like that is happening at a high school or a university, it should be rooted out and eliminated. That is what Title IX of the Civil Rights Act is all about. Money doesn’t matter. Fairness demands equality.

But in the real world, when men and women “work” for separate organizations with separate revenue streams and separate collective bargaining agreements, it’s all about the Benjamins. If the senators have any ideas on how to grow WNBA revenue or increase interest in women’s golf, I’m sure the powers that be will listen. But trying to find some insidious sexism here is a waste of the public’s time and money.