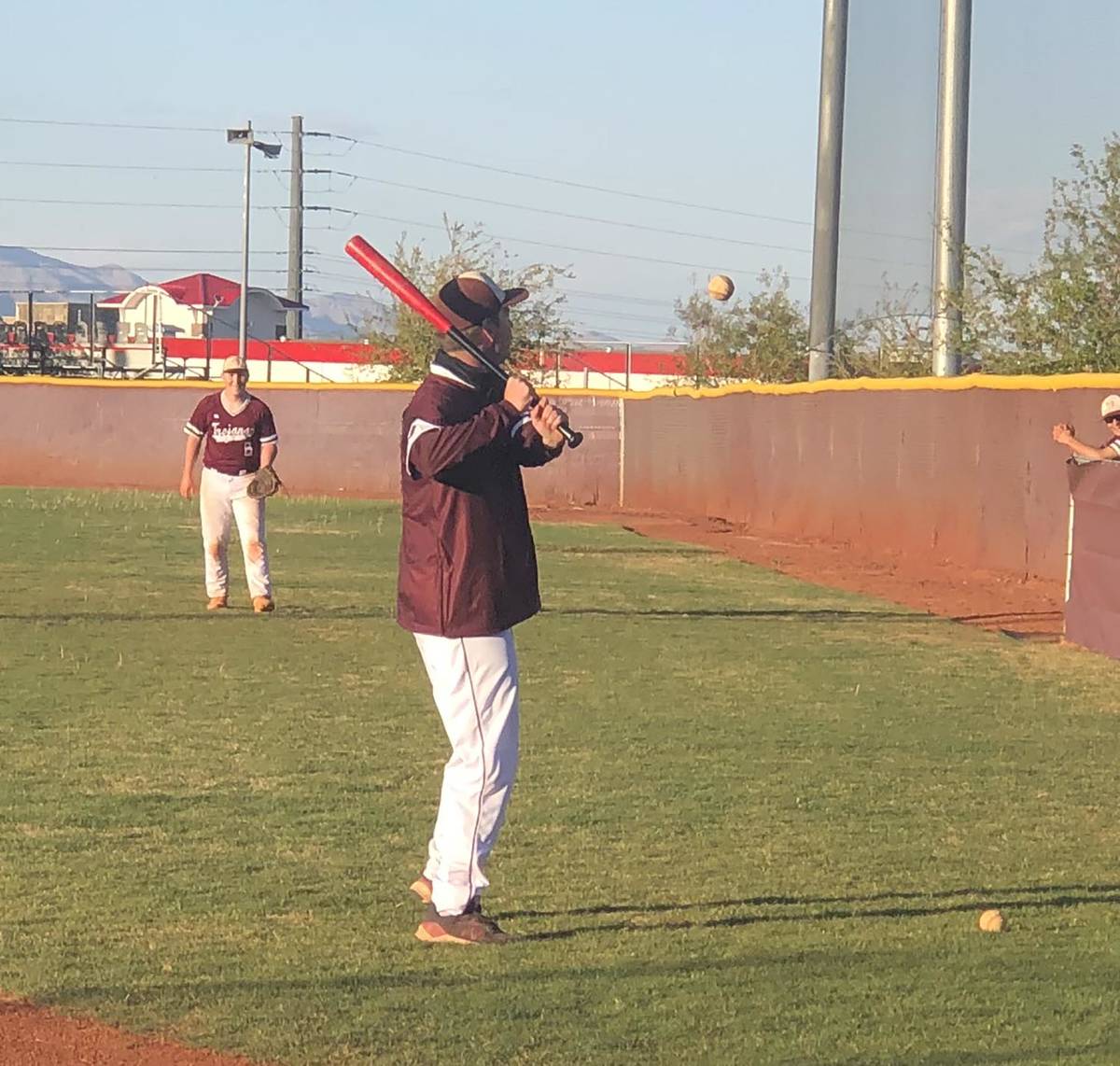 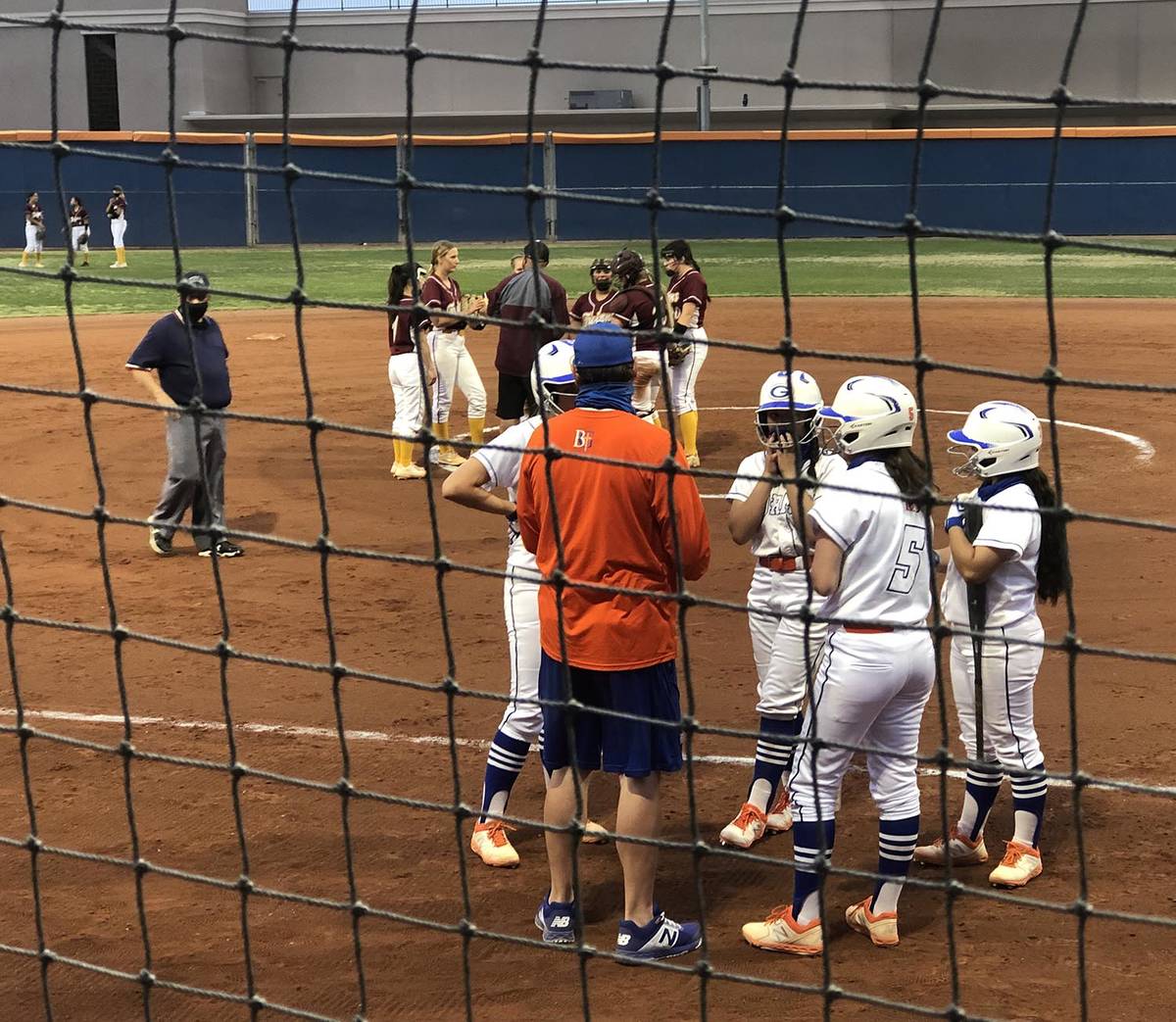 Let’s get this out of the way right up front: The opening weekend of baseball and softball season for Pahrump Valley High School was ugly. Awful. Brutal. Horrific. Gut-wrenching. And … damn, I dropped my thesaurus.

OK, maybe not that bad, but it sure wasn’t good.

Of course, like most things in life, perspective is needed. But let’s be really, really clear about what, exactly, requires perspective. Deep breaths, everybody.

Both Trojans teams on Thursday traveled to Summerlin to take on Faith Lutheran in a pair of doubleheaders. I could complain about the distance between the two fields, or the very slippery curb that easily could send someone falling on their face in decorative stones while avoiding an oncoming vehicle on a very narrow strip of asphalt, a tumble that could require the assistance of two bystanders to reverse, hypothetically speaking, but let’s stick to the gory details in the statistics.

The baseball team had a respectable 4-0 opener followed by a 13-1 rout in the nightcap. Faith has good lights, so it really was a nightcap. The softball team lost consecutive 11-4 games, allowing 29 hits and making 9 errors in the process.

Having enjoyed their visit to Gorman Lite, the softball team went to see the real thing Friday. The Trojans had visions of an upset after two innings, taking a 5-0 lead, but Bishop Gorman doesn’t have an athletic training facility for nothing. The Gaels scored 15 consecutive runs to hand the Trojans a six-inning, mercy-rule defeat.

And lest you think the Crusaders and Gaels are simply much better programs and the Trojans shouldn’t be playing them, think again. During their Class 3A state championship softball season two years ago, the Trojans defeated both of them, topping Faith Lutheran 7-3 in the Colorado River Invitational then edging Bishop Gorman 14-13 in the last game of the regular season.

But one look at the rosters will tell you this is not 2019. I am at a lot of these games, and I didn’t know a lot of the names on the softball roster, and I wouldn’t have known a lot on the baseball roster if I hadn’t seen a bunch of them play in Little League back when they won the district championship. Yes, Drew, I remember.

But, as I said at the beginning, perspective is required. First, despite past success against these teams, the Trojans were punching above their weight. Faith Lutheran plays in Class 5A for baseball and softball; Bishop Gorman is in 4A for softball and 5A for baseball. Second, missing last season was a giant setback in terms of player development, and other schools need that more than Faith and Gorman, who, in most sports, get ready-made athletes.

“We’re always looking for ways to get better and teams that are going to help make us better,” PVHS softball coach Cassondra Lauver said. “We’ve established ourselves as a pretty legit team, and they’re wanting to come and play us as well. It didn’t go the way we wanted it to, of course, but we learned a lot in the past two days.”

And third, unless you have a lights-out pitcher who has had success at the varsity level, nobody really knows what’s going to happen early in a new season. Teams get better between opening day and the season finale, or at least they should. So take anything that happens on opening day with a grain of salt.

Still, it’s difficult to put lipstick on this particular pig, but both Lauver and baseball coach Brian Hayes haven’t won league championships by getting down on themselves and their teams after a rough couple of games.

“Yesterday was just hideous, and I think every single player and coach would agree with that,” Lauver said Friday of the debacle the day before. “We had a really long conversation about expectations and standards for ourselves. I think we came out a completely different team today. The energy that the girls had was significantly better than what it was yesterday. Yes, we lost the game, but there was so much more that was gained today.

“We know that we have a lot of work to do and progress to make and fundamentals to build on and development to try to make up for from the past year, but today my girls showed that they are gritty and have heart and have desire and they’re not going to quit. They’re going to be competitors. They want to compete.”

That’s not coach-speak. That’s Lauver, and her consistently upbeat attitude plays no small role in the team’s success. The softball coaching staff is well aware that the competition in their league is, to be kind, often embarrassing, and it’s definitely not good preparation for the postseason, when, of course, there is a postseason.

Hayes, at least, had one competitive game to discuss, but even the one-sided second game didn’t get him too down on his squad.

“Overall, we were pleased with our performance during the games Thursday,” Hayes said. “We came out in Game 1 focused and ready to play. Jake Riding did a phenomenal job shutting them down with only an unearned run allowed in 4 innings before being pulled due to pitch count. Offensively, we came out aggressive, expecting the fastball and swinging early, just a lot of balls hit right at the other team.”

Hayes noted that most of the damage in the second game was done in one inning, when the Crusaders took a 9-1 lead after the first.

“We allowed 9 runs (2 earned) on 10 freebies in the first inning of Game 1 before settling down and getting back to work,” he said. “Freebies” are walks, hit batters, errors, all of the fun things that make coaches go gray. Or drink heavily. Or go into real estate. “The first game was also a tale of a bad inning, as the first run they scored was off of a miscommunicated play on a fly ball between the infielder and outfielder.”

So neither coach is hitting the panic button, although obviously each saw things that need to be addressed.

“We had plenty of opportunities to score runs in both games but could never get that big hit,” Hayes said. “We need some guys to step up in the following weeks and do their jobs both in the field and at the plate in order for our team to be successful in the win/loss column.”

“We are always talking to the girls about how you need to become a better athlete, not even athlete, just a better person in general, making sure your work ethic is there, did you play the best game that you can, did you leave it all on the field, did you give everything you had to your team today, because that’s what successful people do,” Lauver said. “They give their all.”

And Pahrump Valley’s baseball and softball players have plenty of chances in this shortened season to do just that.