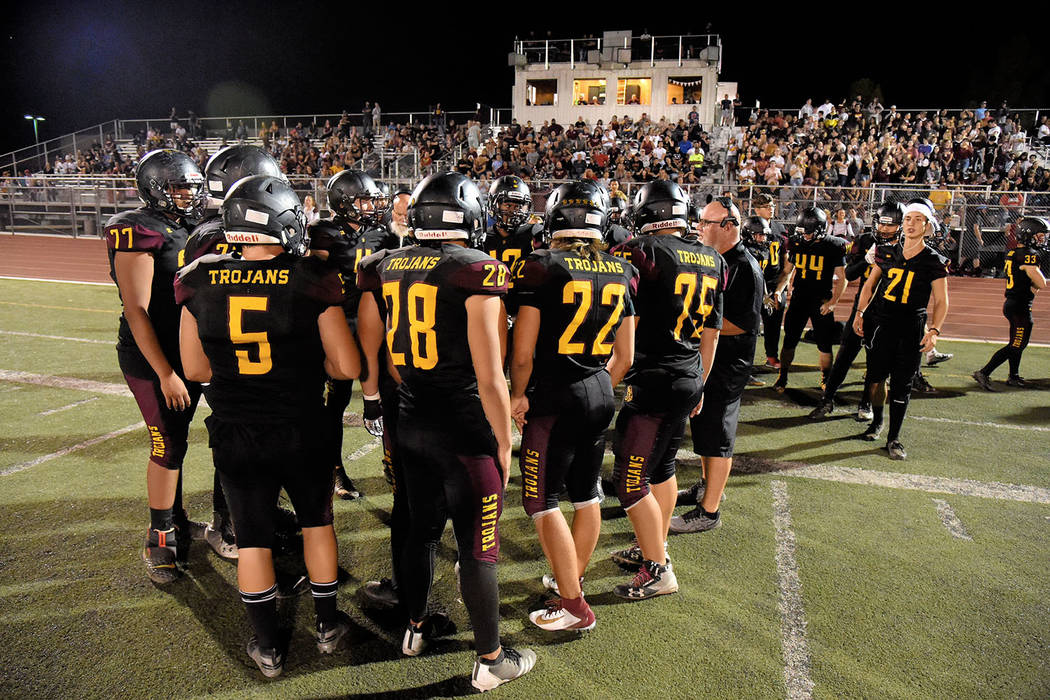 Peter Davis/Special to the Pahrump Valley Times There are some good football players at Pahrump Valley High School, just not enough of them. Football coach Joe Clayton needs more students to come out for football for the program to have sustained success. 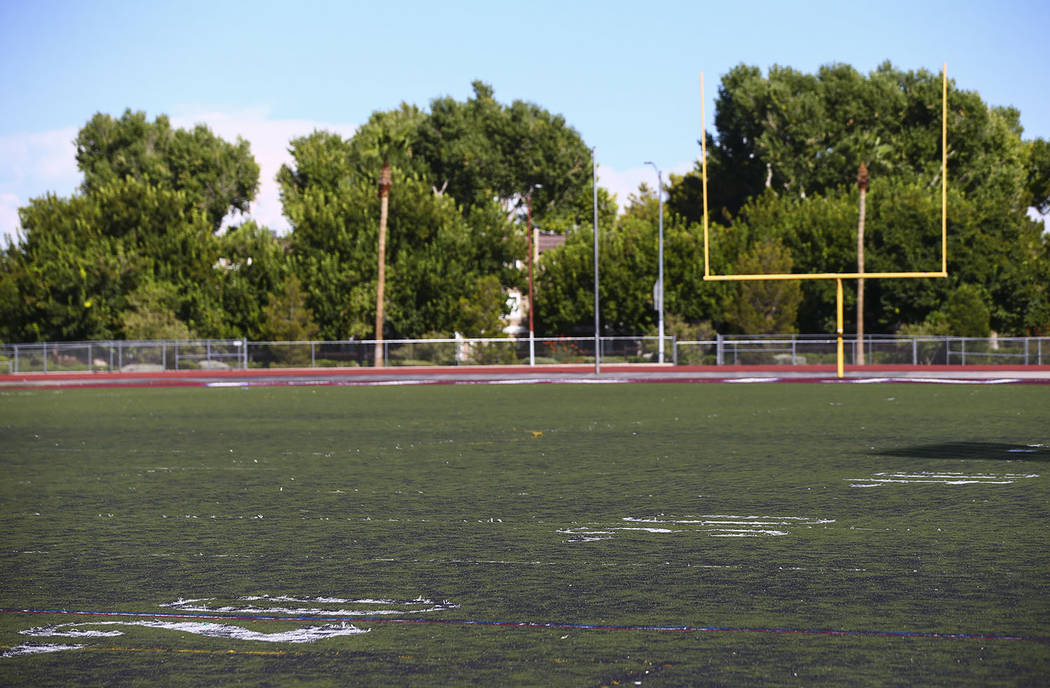 Chase Stevens/Las Vegas Review-Journal A view of the deteriorating turf at the football field at Valley High School in Las Vegas. The team's football field, along with the fields at Clark and Rancho, have been deemed unsafe, but many Clark County schools have fields that need replacing. 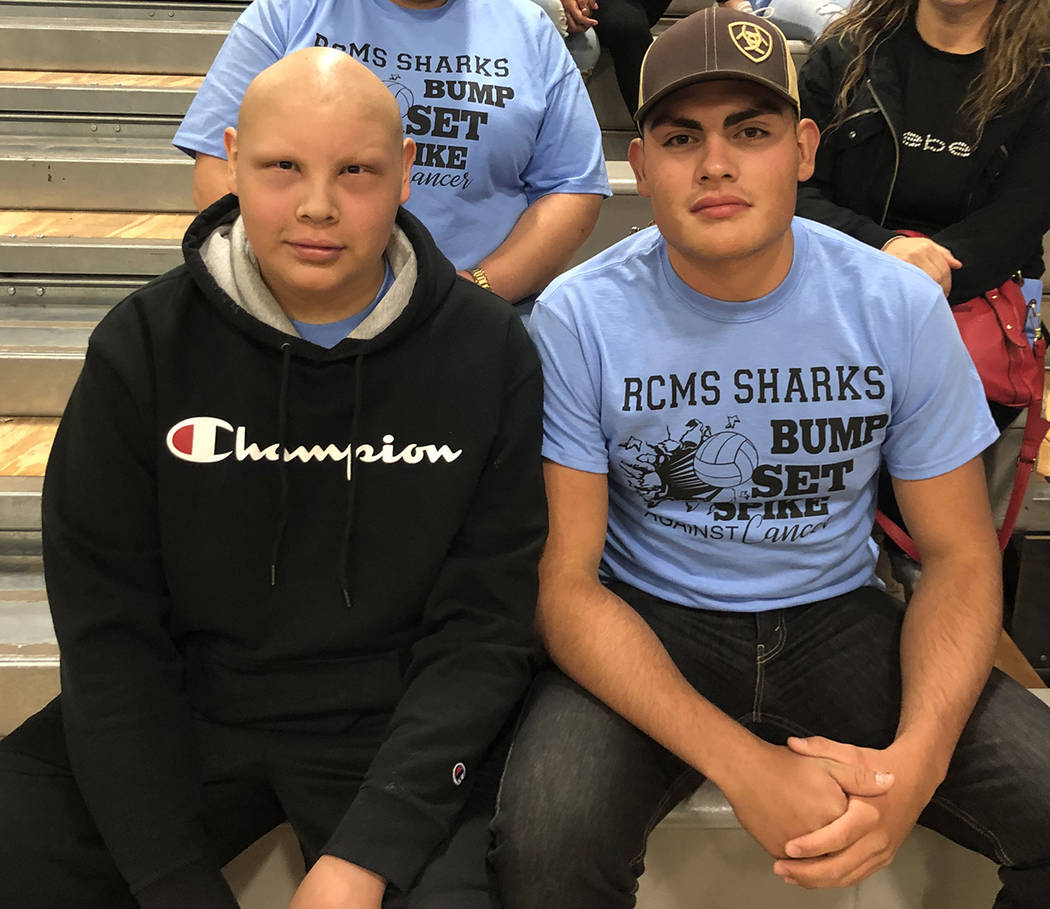 Tom Rysinski/Pahrump Valley Times Some things are beyond even Santa's control, but if it was in his power, Damon Chavez, left, would win his battle with cancer and have a spot on Pahrump Valley High School's soccer team next fall. Ex-Trojan Jose, Damon's big brother, is at right.

Call it a holiday tradition. Or call it being lazy. But it works for me.

Many, many years ago and many, many miles from Pahrump, the editor-in-chief of a daily college newspaper decided she wanted to decorate the office for the holidays. The very hard-working sports editor, who somehow managed to find time to run the sports department while being on time for all of his classes, spending hours on end in the library and never parking illegally, respectfully suggested the sports department did not need seasonal adornment.

Yet, upon returning to the office after going to class and certainly not blowing it off to go to the student center snack bar, he found a string of multicolored lights around the sports department’s bulletin board. But the perpetrator was gone, off to her two-hour-plus night class, leaving plenty of time to remedy the situation.

Down came the lights, and some tape was found. If you’ve ever tried to use tape on a cinder-block wall, you know it takes some dedication to make it stick. But eventually, and after a couple hundred pieces of tape and at least that many words that do not fit the holiday spirit, those happy, cheerful lights designed to make the season merry and bright spelled out, in script, “die.”

One of the paper’s photographers came over to record this for posterity, taking a picture of our hero in front of his masterpiece, sitting in his chair, feet up on the desk, giving the photographer a signal that he was No. 1. Well, sort of.

Years later, that photograph found its way into my then-place of employment and more recently has been used to wish Facebook friends a Merry Christmas. (It’s OK. They get me.)

So some of us have a different approach to the holidays. We love the Grinch until he goes all soft in the end, partly because of that whiny pest Cindy Lou Who. We think Mother Nature should have stayed out of it when Heat Miser and Snow Miser refused to help show Mrs. Claus the world loved Santa. And that idiot elf should stop this dentist nonsense and get back to making toys.

But that does not mean gift-giving is beyond our range of talents. There’s something magical about waiting until the last minute, then going to a mall (this was before the internet took over shopping) at 10:30 a.m. on Christmas Eve and finding the perfect gift for everyone in your family of five and still getting to Mom’s house in time to cook Wigilia dinner. (Google it. I’m busy.)

So, even the grumpiest among us enjoys playing Santa Claus, and he has a nice, big bag of hypothetical presents to give out this year.

For Pahrump Valley football coach Joe Clayton: Joe’s letter to Santa looked familiar, but in his case it wasn’t being lazy but having the same need as last year: more humans. There is no way a coach at a Class 3A school should open a football season with 23 varsity players. You’re asking for trouble. But Clayton is not the type to put players on varsity who are not ready. There were decent numbers on the junior varsity, but varsity depth is needed, almost desperately. So let’s send him more bodies.

For the Clark County School District: New turf fields for every high school. It is pretty hard to believe that little ol’ Pahrump has a better field to play on than most high schools in that enormous district. Ever see the football field at Liberty? And that’s a terrific program. How about Western? The soccer field there looks like the Western Front after the Germans pulled back. Then there’s the moat at Mojave’s soccer field. And before you say it’s a luxury item, it’s not. It’s a safety issue. Line it for football and soccer (and, if you’re planning ahead, lacrosse and field hockey, because they’ll be here someday) and ensure a safe field.

For every football-playing school in Nevada: A registered letter from the principal at Western High School announcing the Warriors no longer will field a football team. This is not just because the program is an on-field embarrassment, but it’s worth running the numbers. Since 2008, the Warriors are 10-98. That includes 2-7 this past year, when they beat a Class 2A school and a school that played an independent schedule.

In games against Class 3A opponents (the Warriors are in the Class 3A Sunset League with Pahrump Valley, for now) they were outscored 298-0. Zero. And if they were keeping score for class, the scoreboard would look even less kind. Those players showed zero respect for themselves, their opponent and the game of football, mocking Pahrump Valley players before and during the game, inflicting cheap shots left and right and basically acting as if they were raised by wolves.

And it’s NOT the school. Western has very good boys and girls soccer teams, and I saw the school’s wrestling coach recently and that man does not tolerate nonsense. So don’t tell me nothing can be done because it’s just the way the students there are. It is not. Combined with how noncompetitive they are on the field, the best thing to do is just pull the plug and leave the field to players that get it.

For Terrena Martin, Skyler Lauver, Chase McDaniel and McKayla Bartley (and those who will come later): Academic and athletic success at the collegiate level. The very first event I covered was signing day at Pahrump Valley High School in 2018. There were four student-athletes there. Then, last year, there were three. Here it is December, and this year’s class already has four, with a chance for more. All of them play baseball or softball, and all of them have played for club teams in Las Vegas. Draw your own conclusions.

For Damon Chavez: A chance to play soccer for Pahrump Valley High School. Anyone who knows the story about this brave young man’s fight against cancer would love to see that happen, and if it does, soccer attendance will skyrocket. And right there on the sideline will be big brother Jose, league MVP as a senior for the Trojans, who will have to fight me for a good view of the field.

For Beatty High School baseball (and, really, all Class 1A baseball teams): One legitimate front-line starting pitcher. Most 1A schools have the same problem, and that’s because the towns are so small there is not much, if any, youth baseball. Many players learn the game when they get to high school, and the results speak for themselves. Now, I don’t care if a team can’t hit or field, but when a team can’t pitch, the games are, well, kind of tough to take.

OK, insufferable. Interminable. Painful. They should record them and show the tapes in prisons instead of putting people in solitary. Drop tapes on North Korea and watch Kim knuckle under (if that’s what the current administration actually wants, anyway). Keep out of reach of children. Really, it’s that bad. Last year I saw umpires call the second game of a doubleheader early because the window for which they were being paid to umpire was about to close. On another day, Beatty won both games of a doubleheader by the absurd scores of 21-8 and 18-15.

A doubleheader between Round Mountain and Green Valley Christian was so bad, I tweeted out, “Changing pitchers in this game is like changing the color of chalk in the outline of a corpse.” My buddy Drew Middleton said it was the tweet of the year, but I’ll just say that kind of witty, insightful commentary is a good reason to follow our Twitter feed. It’s @PVTimesSports. Go follow it. Now. I’ll wait.

You back? Good, I’m almost done.

For Boulder City High School athletics: Sure, Santa shouldn’t play favorites, but hanging around Pahrump Valley High School too much has an effect. So Santa has a nice, big bag of coal for the Eagles and all of their minions. (Except softball coach Angelica Moorhead, who was so nice to me when she saw I was wearing a special shoe while recovering from foot surgery during the 2018 softball regionals.)

Plus, Prancer and Cupid had way too much Tex-Mex and need to make a pit stop. Boulder’s football field seems like a fine place for that.

Santa could go on, but nobody gets unlimited space, and threatening to unleash flatulent reindeer in the office seems like a bad way to demand more. So we’ll call it a day.

Besides I have an important issue to tackle. We are under attack by the media, according to some yammering yahoo with a badge, and while I don’t exactly know who “we” are, I do know I work in the media and have for 30 years. And yet I haven’t received any instructions as to my role in this attack thing. I’m feeling left out. What am I supposed to be doing? Convincing 9-year-old boys that they want to be gay, or perhaps converting teenagers to Islam?

I have no clue. Maybe I should look in my spam folder.

Oh, and speaking of the latter possible task, want to have some fun around Pahrump while doing boring things like standing in a checkout line? Casually work into conversation that Mohammed is now one of the top 10 boys baby names in the United States and see how many heads explode. I’d put the over/under at four, depending on whether or not you’re in the express lane.

Anyway, it would have been way too easy to give everybody wins and championships. Those require hard work; they are not gifts. And elves don’t know squat about sports.

Merry Christmas, Pahrump Valley Times readers. And be careful out there.