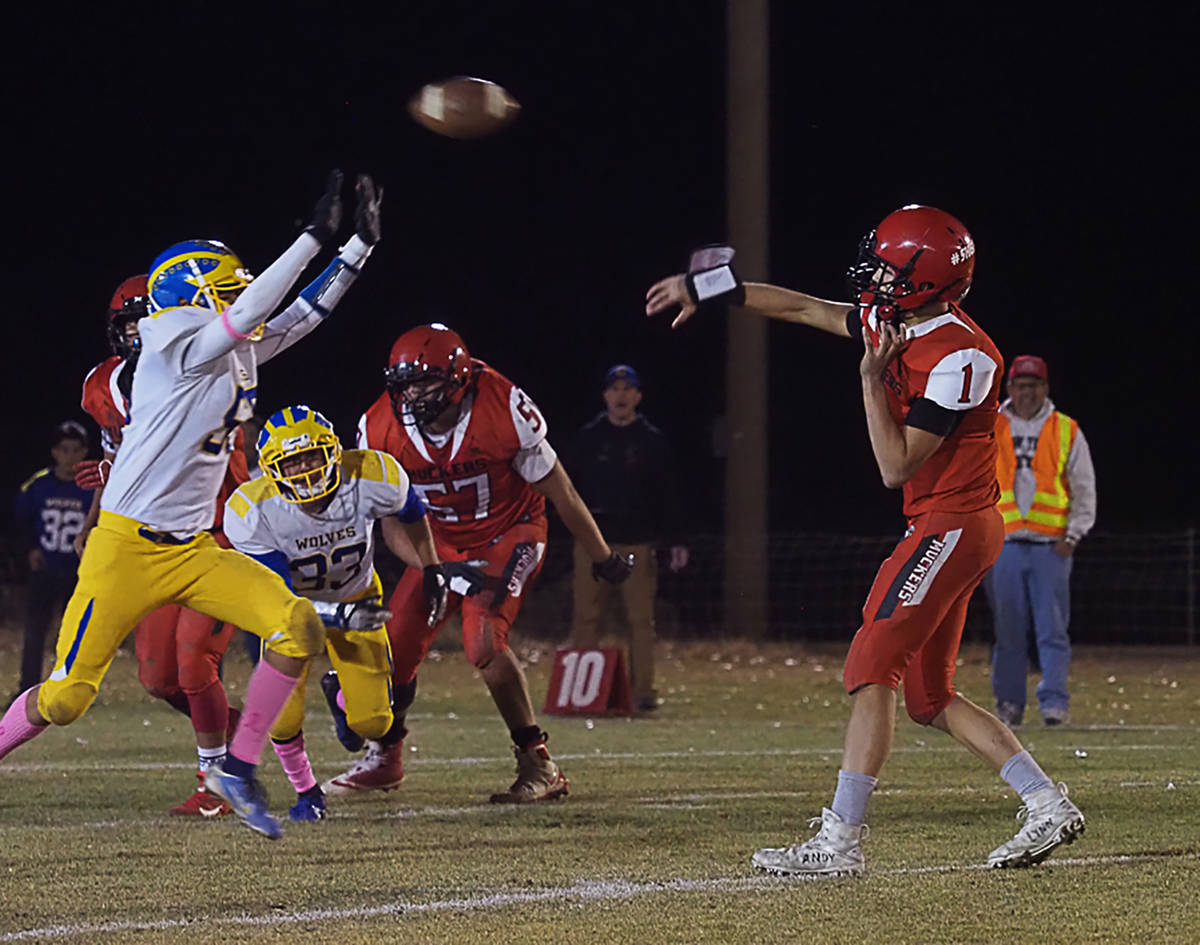 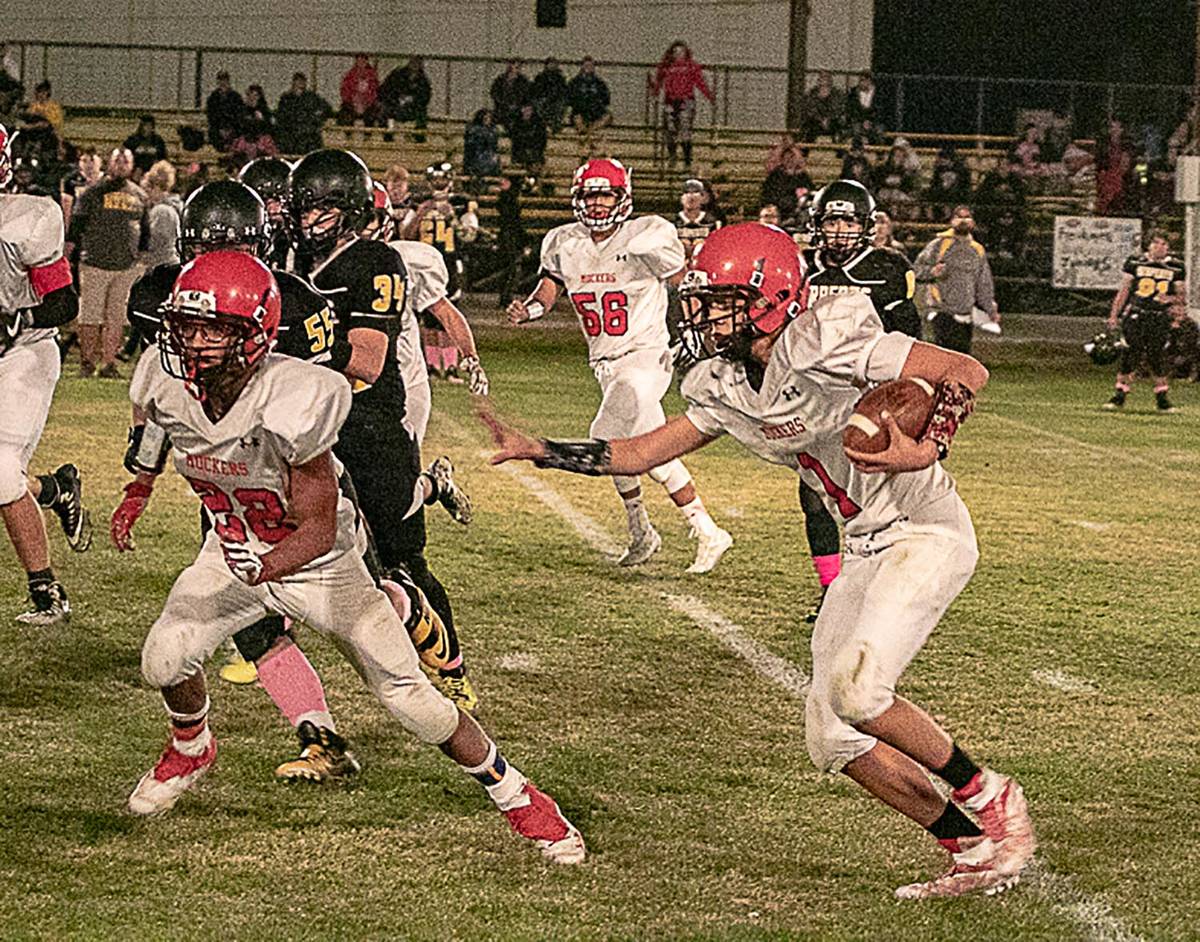 Times-Bonanza & Goldfield News file photo Junior quarterback Dillan Otteson looks for running room during a 2018 game against Mineral County. The Muckers wrapped up the Class 1A Central League title that season with a 56-12 win over the Serpents. 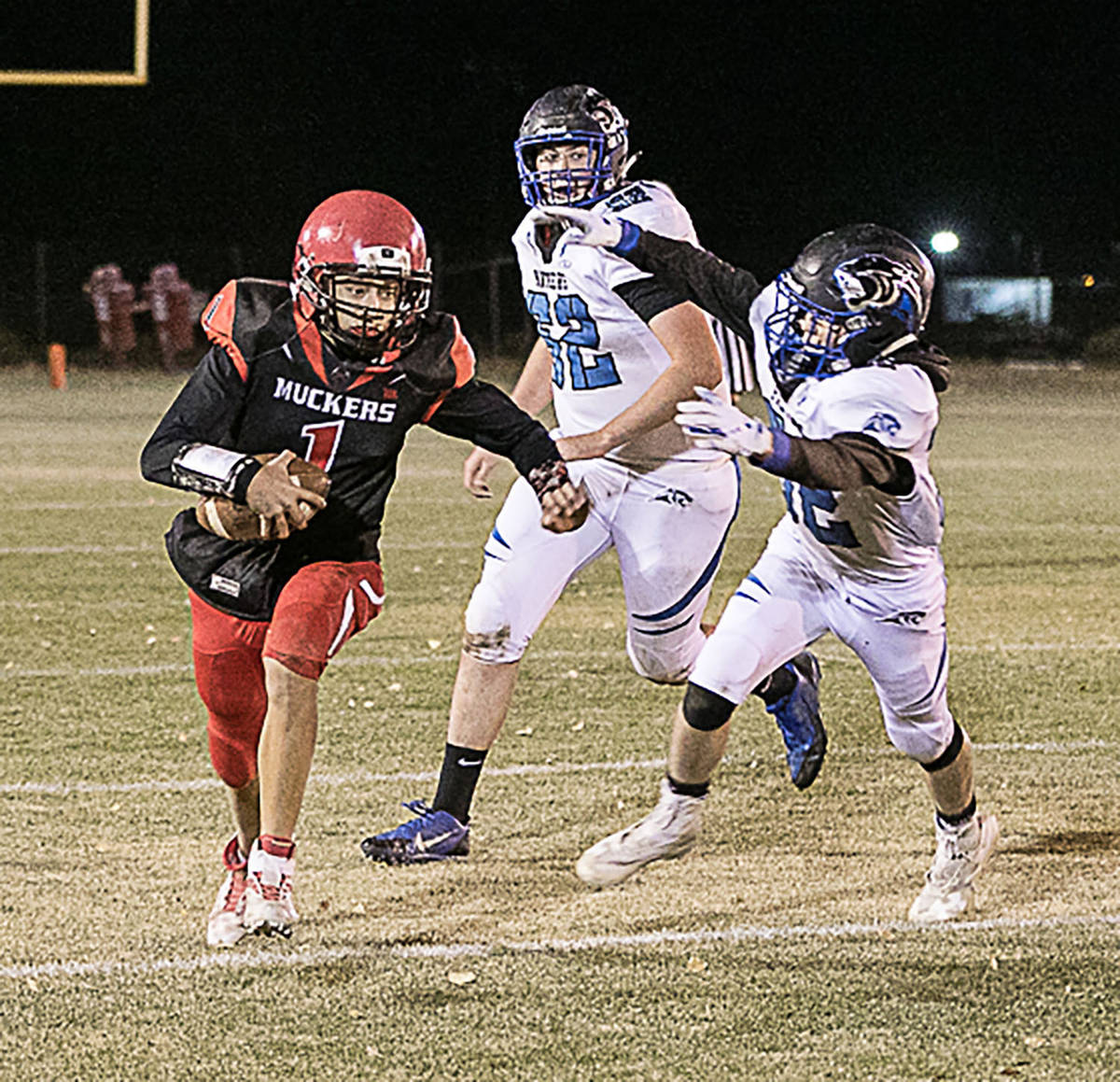 Times-Bonanza & Goldfield News file photo Quarterback Dillan Otteson breaks to the outside during Tonopah's playoff victory over Pahranagat Valley in December, 2018. As a junior, Otteson led all Class 1A quarterbacks in the state in yardage, completions and touchdowns.

“I was on the recruiting website, NCSA, just filling out recruiting forms, and Doane came up,” Otteson said of Next College Student-Athlete, where he found the NAIA university in Crete, Nebraska. “Ever since, they kind of caught my interest. They started sending me scholarships, and now I’m going.”

Otteson will be joining a team that has been in the middle of the pack in the Great Plains Athletic Conference in recent years, going 5-5, 6-4 and 4-7 in the three years since back-to-back playoff appearances in 2015 and 2016.

“I’ve watched a little bit of their game film,” Otteson said. “They’re kind of a pass-heavy team. They run a lot of shotgun formation, pistol, that kind of thing.”

Last year’s Tigers were 4-3 before losing four consecutive games to close the season, getting outscored 157-20 along the way. One of the teams they played already has Otteson’s attention.

“The only thing I do know is they play the number-one team every year,” he said of Morningside College, the defending NAIA champions who drilled the Tigers 42-10 last November at Doane. The Mustangs have been undefeated in the Great Plains Athletic Conference for four consecutive season and six of the past eight, going 95-11 over that span.

The Tigers’ schedule has a slight Pahrump Valley High School flavor. The University of Jamestown, in North Dakota, is also a member of the GPAC. PVHS alum TJ Milk just completed his football career for the Jimmies. And Doane opened its season last year by hosting Ottawa University Arizona, which includes former Trojans Zach Trieb and Nico Velazquez on the roster.

The Spirit rolled to a 48-7 win against the Tigers in Nebraska.

Doane quarterbacks threw for 1,614 yards over 11 games and were sacked 40 times on an offense that averaged just 65 yards rushing per game.

Meanwhile, Otteson threw for 2,216 yards last fall and ran for 1,749 as the Muckers went 8-2. Otteson’s most productive passing year was his junior season when he completed almost 65 percent of his passes for 2,991 yards and 46 touchdowns, but he saw a dramatic increase in rushing yards after compiling 648 as a junior.

In essence, what the Muckers needed, Otteson provided.

“They just said they’ve seen leadership skills and how I can control the offense,” Otteson said. “Another big part is they like me because of my grades, that really got their attention, too.”

One thing that got Otteson’s attention was the fact Doane is in a small town. Crete, population 7,160, lies less than a half-hour southwest of Lincoln in southeastern Nebraska. That setting appealed to a high school kid from a town the size of Tonopah.

“It’s a smaller town, a smaller community, so I’m kind of used to that,” said Otteson, who said his parents agreed it would be a good fit for him.

“Smaller town, so a little more like Tonopah,” said Duffy Otteson, who coached Dillan in wrestling as well as football at Tonopah High School. “It’s next to a river, and he likes to fish.”

“They said it’s not a very big school,” he said of Doane’s enrollment of 1,011. “And I don’t go to a really big high school, so it might be a better fit for me. The teachers are great to work with and will help me get my teaching degree.”

And on the football field?

“He will be able to compete for a starting job his first year,” Duffy Otteson said. “And they gave him a good scholarship.”

And that was enough to send Tonopah’s standout quarterback on to his first college football summer camp, slated to start in late July.

“I think I’ll be a pretty good asset to their team and jump right in, and hopefully things will start to roll,” Dillan Otteson said.