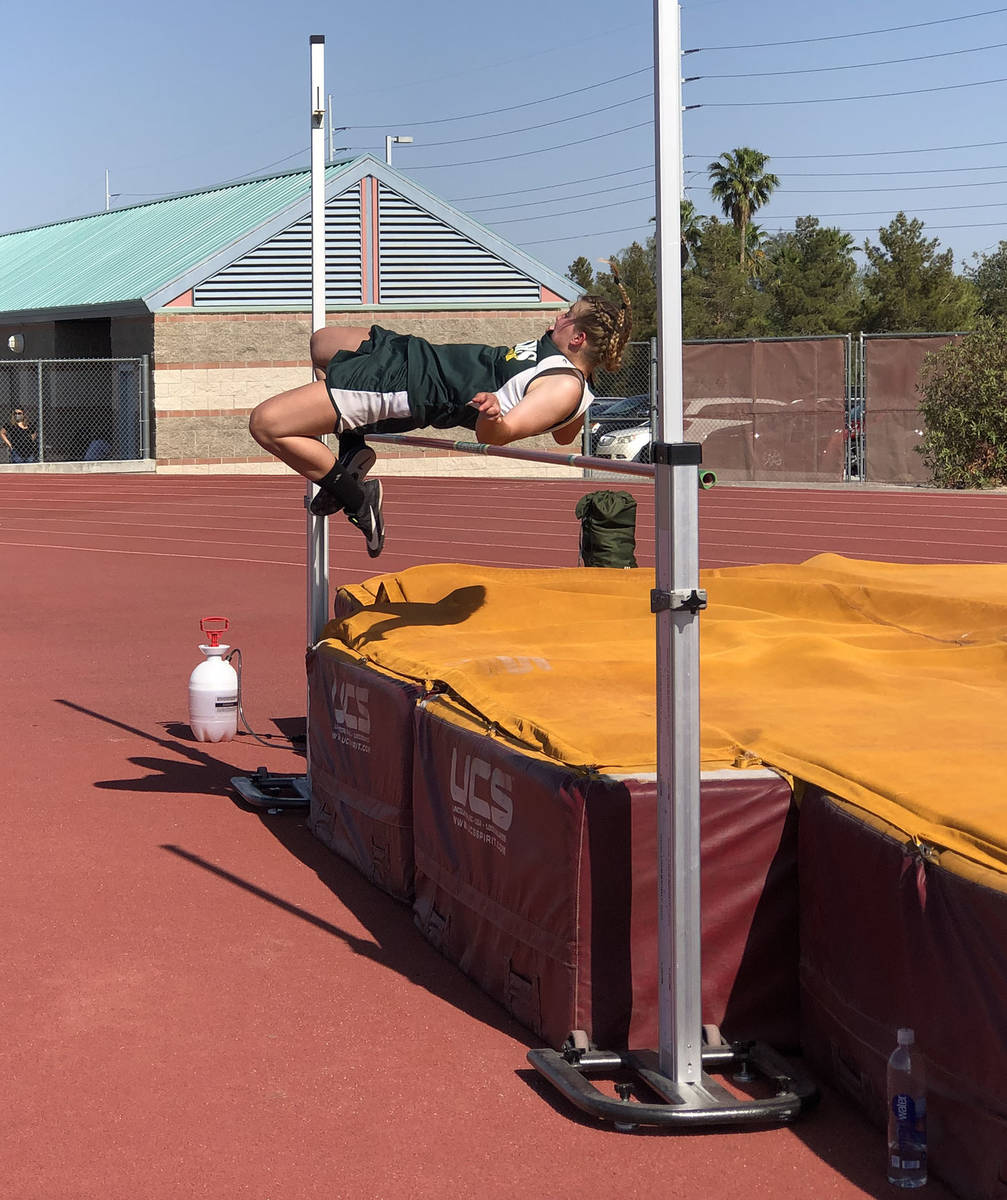 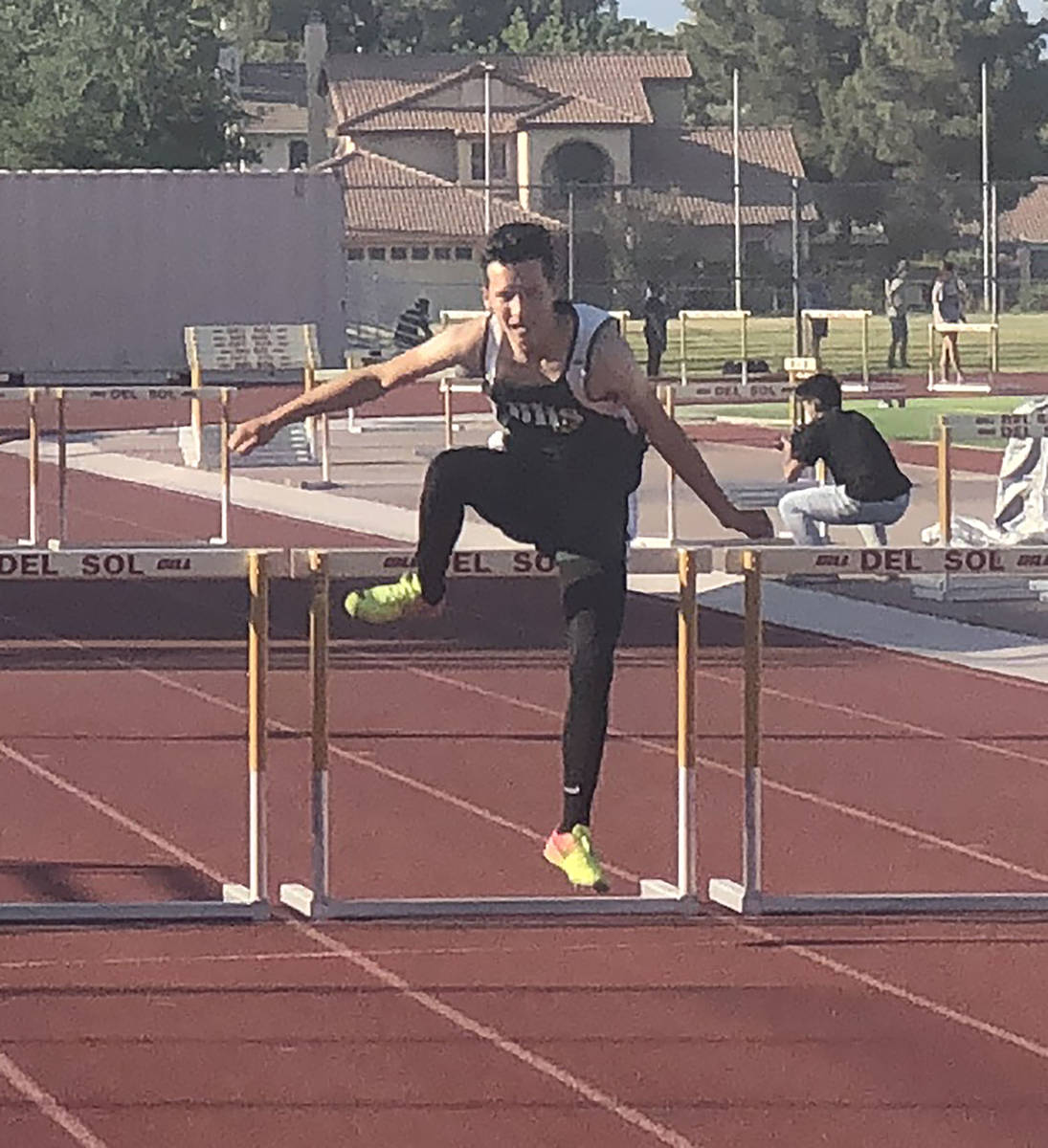 Sophomore Montana King just started the high jump a couple of weeks ago. Senior Noel Gutierrez was a Class 1A state champ in hurdles two years ago. But both of the Beatty High School athletes close out the shortened season ranked with the best in the state.

In a near-empty stadium Saturday at Del Sol Academy in Las Vegas, King looked as if she was just warming up as she competed alone in the high jump, watched closely by Hornets coach Rusty Anderson. She didn’t appear to be new to the event, but it would have been tough to have been any newer.

“Just these last two weeks,” King said about her start in the event. “I was clearing 4 feet when I first started. At my last track meet, my (personal record) was 4-2, and I just PR’d 4-7.”

Clearing 4 feet, 7 inches placed King third among all Class 1A high jumpers in Nevada. On the same day King was recording her PR, Sage Ridge sophomore Libby Mulvaney cleared 4-10. The only other jumper ahead of her is Kaylee Wright, a Smith Valley junior who has bested 4-8.

“We didn’t get the pits out until a couple of weeks ago,” Anderson said. “Our high wind causes our pits to go in flight sometimes, it’s damaged fences, ruined our pits, torn things. I almost was reluctant to get them out. We’ve only been doing high jump for about two weeks.”

Apparently that was plenty of time to climb the state’s performance lists.

“I do long jump, and I just thought that I’m good at jumping so I thought that I would be good at high jumping,” King explained. “So I thought I’d just give it a try since I had never done that before. I put a lot of effort into it, and I really want to try and excel in it.”

At Del Sol, King also competed in the long jump, triple jump and 300-meter hurdles, calling the latter her favorite event. She is among the Class 1A leaders in all three of them, as well, posting the best 300 hurdles time (54.07), ranking second (14-6) to Eureka’s Isabella Minoletti in the long jump and sitting in third (26-9) in the triple jump, trailing only Minoletti and Round Mountain’s Karlee Young.

There will be no state championships this season in any sport, and the Hornets — who have their graduation the night before — will not compete in the region championships this weekend in Ely. But motivation is not in short supply.

“My team, four years of running track,” Gutierrez said. “It’s been great. There’s no state, but it was still a fun season. Last season was short, but the only meet we had was fun. This season was longer, so it was more fun.”

Gutierrez said he has been satisfied with his times this season, although he had hoped to set a school record, which at Beatty is 42.0 in the 300 hurdles. But his time at Boulder City is Class 1A’s best this season, he owns the third-best time in the 110 hurdles (18.64), and he is part of two top-five relay times: He teamed with Victor Alonso, Darren Stephenson and Adriel Oseguera for the fifth-best 4 x 100 time (49.10) and with Francisco Granados, Oseguera and Stephenson for the third-best 4 x 200 (1:42.5).

“I love the relays,” Gutierrez said. “I have fun running with the relay teams. They’re fast, and I’m lucky to have them. I think they’re going to do great next year.”

Despite a small roster — “Twenty-two started, and I still have them all. It’s low for me,” Anderson said.

The Hornets have plenty of talent, and without the pressure of qualifying for the postseason they have had some fun with track season.

“I was asking even my experienced athletes to do things they haven’t done before, so my whole team was kind of starting from scratch,” Anderson said. “When I started the season, I told them, let’s try new things. This season is for you guys. We wanted to open up everything to get you back to a little bit of normality. So this is for you, let’s go out and have fun.”

“It’s like this track meet. I didn’t tell them what to do. Every meet before I picked where they go. This meet, I sat them down in my classroom, and I said, pick your events. This is your meet, because we’re not going to regionals.”

In a normal year, Anderson decides who competes in what at regionals; after all, there is a team title at stake and the chance to advance to the state championships. But a goal of having fun didn’t mean the Hornets took it easy at Del Sol, or anywhere else.

“Adriel Oseguera is starting to really learn how to throw the disc,” Anderson said. “I completely changed their methodology this year on how to throw, both shot and disc. Last week he hit 109, and that was about a 15-foot jump, and I suspect he’ll do a PR again this week. He’s really starting to hit his stride on that.

“Cristal Lopez, I told her a couple of weeks ago that she was going to go over 70 (in the discus), no problem, and she was like no way. Last week she threw over 70, and she was so, so happy. She’s starting to come into her own as a thrower. She’s still doing a standing throw, we haven’t even progressed her into the spin. I don’t want them to get ahead of where their levels are.”

Lopez’s throw of 77-9 at Del Sol is her PR and ranks seventh in the state; she also ranks eighth in the shot put with a 26-6.25 heave in Boulder City. Anderson noted that times and distances have been off in the official records more than usual this year.

“It’s been a super-fun season, and that’s all I wanted for these guys,” Anderson said. “The cool thing is I’m really not losing many kids, four total, and I didn’t hardly recruit. My goal is to start with 70 next year.”

According to one education website, Beatty High School serves 119 students.