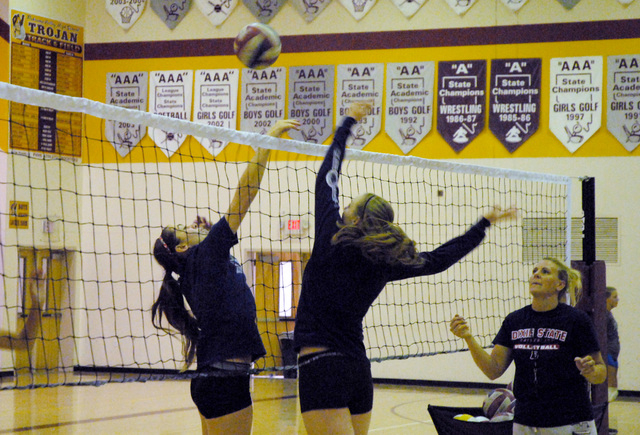 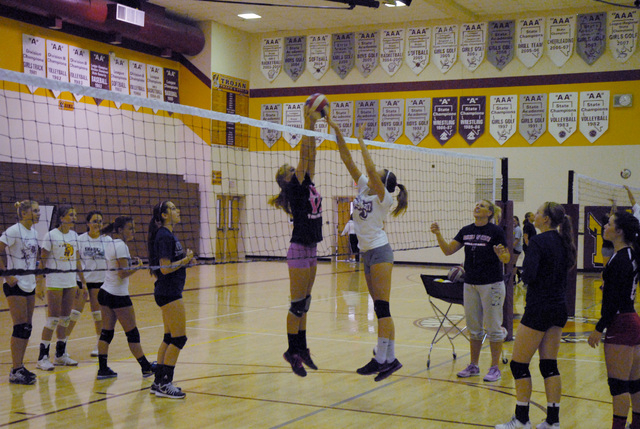 Trojans Coach Jill Harris just concluded a successful minicamp, where Robyn Felder, the head volleyball coach from Dixie State, came down to instruct the girls for three days. Felder brought with her Hannah Harrah, a current Dixie State player who is an outside hitter.

Felder begins her second season as the head coach of the Dixie State volleyball program. In her first season, the Red Storm finished 7-14 overall and 9th place at 5-11 in Pacific West Conference.

Harris was pleased with the turnout. “We had 23 girls show up for camp, both high school and middle school. The turnout for high school was really good. Things look good. Only one high school girl didn’t show up. I love what the kids are showing. They are all working hard,” Harris said.

Player Alyssa Murphy said the energy at camp was pretty high. “I have been coming to the open gyms and so the camp has got things going. Next week we will be at the UNLV team camp. We are missing a couple of people but we are working together pretty well. I am in OK shape but we will work on that,” Murphy said.

There will be several major changes in the Trojans schedule this year. The Pahrump Volleyball tournament will not be held this year and is in jeopardy for the future. “Our tournament got canceled because Tonopah will be having the Harvey Gonzalez Memorial Tournament. So we canceled our tournament. Fewer and fewer Clark County schools were coming out. It pretty much is a county thing because county schools never get charged for it,” the coach said. She added the new tournament will be a good opportunity to see some of the northern and central schools. “We never get to see the central Nevada teams so I am hoping we do see a lot at that tournament,” Harris remarked.

The graduation of Payton Hart was difficult for the team because Payton hit the ball so hard, but Harris feels that the current team will be able to absorb the loss quite well. “Alexis Trieb is looking strong. She was a freshman last year and was brought up towards the end of the year to get some playing time. “Jill Smith will take Bryana Soliwoda’s place as setter. This year our setting will be stronger. Jill is taller and a little bit more athletic. She can block and she can hit,” Harris remarked.

Smith’s blocking seemed to be making a good impression on the coach during camp and Smith seemed to be excited about the skills she was learning and the upcoming camp next week. “We are all stoked to be here. My blocking is coming together. I am going to camps and getting better on skills,” Smith said.

Smith just returned from the Nevada UNR camp. “It was pretty intense and it made me step out of my comfort zone and I am getting in shape,” she said.

Although Harris was excited about the upcoming season, she knows the team has a long way to go. “The team is not in peak form yet, but a lot of the team has been doing something this summer,” the volleyball coach said. “Jill and Lauren just got back from camp on Sunday from Reno and Megan McDermott has been working out with Randall Cunningham all summer. Also, a lot of them have been going to the gym. My open gym has been 20 plus all summer.”

The only concern that Harris had about her program was the lack of freshmen girls coming out for the sport. Her assistant, Susan Toomer said many of the girls at the junior high had chosen to play softball. “There were only two incoming freshmen at the camp. I am not sure if we can field a freshmen team this year,” Harris concluded.